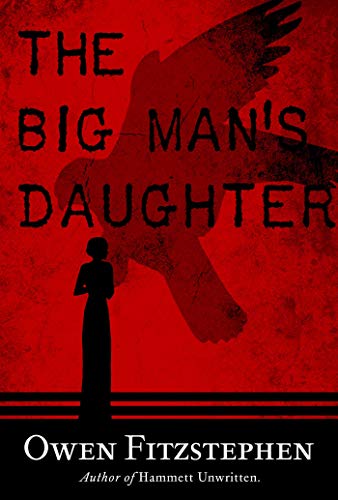 “Just as Hammett made imagined crime feel real, McAlpine makes metafiction mischief suffused with meaning; from the masterful Hammett Unwritten, to the too-wonderful-not-to-mention Woman with the Blue Pencil, and now the mesmerizing The Big Man’s Daughter, McAlpine’s novels prove as moving as they do dazzling.”

The movie departs from the book in only four ways. Its classic closing line, cribbed from Shakespeare’s The Tempest, appears nowhere in the book. Short, slight, dark-haired Humphrey Bogart looks little like the tall, blonde, imposing, tough-as-nails private investigator Sam Spade. (Of course, Bogart’s letter-perfect performance proved so indelible that it’s virtually impossible for anyone who’s seen the movie to read the book without hearing Spade’s lines in Bogart’s voice, or even picturing Spade as Bogart, no matter how many times Hammett reminds us of his “blond devil” looks.)

Huston also entirely omits a passage in the book that has inspired (and rewards) seemingly endless consideration and re-interpretation: Sam Spade’s Flitcraft Parable, in which the detective recounts the case of a Tacoma, Washington man named Flitcraft who disappeared in 1922 without a trace until Spade (hired by Flitcraft’s wife) tracked him down in Spokane some years later. Unperturbed at being found, Flitcraft willingly explains why: Having come within a hair’s breadth of certain death one day in 1922 when a falling beam from a construction site hit the sidewalk inches from where he was walking to lunch, Flitcraft, cut loose from his moorings, simply kept walking, never returning to the life he’d known. Flitcraft appears neither apologetic over the desertion his previous life and family, nor bothered by the irony that he’d settled into a virtually identical family life in Spokane.

Though Hammett often said that all his fiction was based in fact, drawn from cases he worked as a Pinkerton Agency operative before poor health relegated him to writing about crime rather than solving it, the author’s classic work contains little evident personal introspection. Hammett’s published fiction, for example, never delved into the near-fatal bout with tuberculosis—a complication of the Spanish Flu that ravaged Hammett along with much of the world’s population in 1918 and 1919—that wrecked his lungs, eventually necessitated his career change, and possibly informed his existential nihilist worldview.

Given his well-documented, lifelong reckless disregard for his own fragile health, it remains an open question whether Hammett himself ever adjusted to beams not falling as others who survived or escaped the flu may have done after it took its catastrophic toll and finally receded.

In one of the most memorable scenes Gordon McAlpine (writing as Owen Fitzstephen) created in his wonderfully imaginative Hammett Unwritten (2013), author Hammett and director Huston meet for lunch to discuss Huston’s script, shortly before The Maltese Falcon is slated to go into production. Hammett Unwritten operates in a captivating parallel universe wherein the real-life counterparts of The Maltese Falcon’s key players invade Hammett’s life, out for vengeance, and conspire to send the 20th century crime fiction master spiraling into the century’s most protracted and confounding case of writer’s block.

At their lunch (seven years into the author’s humiliatingly public decline), Huston and Hammett discuss the script’s few deviations and omissions from the book, foremost among them the elimination of a character, Rhea Gutman, daughter of Casper “The Fat Man” Gutman, the falcon-chasing villain who is killed near the book’s end. Rhea appears in one short episode, drugged, half-naked, and self-harming in her father’s hotel room, a temporary distraction to Spade as he advances toward his final confrontation with the book’s criminal quartet.

Huston questions why the Fat Man’s Daughter appears in the novel at all. “Look, it’s been a long time since I wrote the book,” Hammett replies. “Hell if I remember what I was thinking when I put the girl in . . . But you’re right. I didn’t do much with her.”

Hammett goes on to acknowledge that nearly all of the characters in the book—as well as its MacGuffin for the ages, the black falcon statuette—were based on the principal actors in a real case, including the Fat Man (known as the Big Man in real life), and notably excluding the Fat Man’s daughter and Spade himself.

Hammett goes on to reveal enough secrets about the book’s real-life roots that Huston can’t resist proposing that the two join forces in search of the “real” falcon that eluded its pursuers in the book and the case that inspired it. But his answers fall far short of acknowledging the truth of his ongoing connection to The Maltese Falcon’s characters and the havoc they’ve wrought in his life.

In Hammett Unwritten, McAlpine (as Fitzstephen) achieves the dazzling trick of producing a profound meditation on a great writer’s unraveling without ever seeming meditative or sagging under its heavy subject’s weight. Moreover, it’s a convincing and compelling enough extrapolation of Hammett’s work and life to make any reader inclined to plumb the same questions the novel asks to believe—or even wish—it were all true.

The corollary to such wishful thinking comes in McAlpine’s new novel, The Big Man’s Daughter (again, written under the non de plume Owen Fitzstephen), which plunks readers into an earlier point in the Maltese Falcon-to-Hammett Unwritten timeline: “Nothing’s all true.”

Perhaps no three words better encapsulate the uncompromising, underlying ethos of hard-boiled fiction, the genre Hammett invented that delivered a bracing punch of plausibility to the once-contrived world of detective stories, with their carefully placed evidence and ingeniously solved crimes. Pure truth is a nice ideal, of course, but a fleeting and improbable one in human interactions invariably undercut by angle, motive, and narrative. Living in constant awareness of that dark distinction separated the hard-boiled gumshoe from easily duped and manipulated saps.

As Sam Spade acknowledges to Brigid O’Shaughnessy early on in The Maltese Falcon, when she (partially) comes clean about the made-up story she told Spade and Archer when contracting their services, “We didn’t exactly believe your story, Miss O’Shaughnessy. We believed your 200 dollars. You paid us more than if you had been telling us the truth, and enough more to make it all right.”

The Big Man’s Daughter adds another layer to the onion of truth, fiction, and metafiction in The Hammett Unwritten/Maltese Falcon universe by giving Rhea Gutman, Fat Man’s daughter, the backstory and future she deserved in the irresistible “real-life” alter ego of Rita Gaspereaux, Big Man’s Daughter. We enter her world moments after her father is gunned down, as Rita, an 18-year-old grifter wise and wily beyond her years, attempts to use the Big Man’s murder to con a few hundred dollars out of an overmatched undertaker.

The story of The Big Man’s Daughter reconnects readers with Evie LeFabre (Effie Perine in The Maltese Falcon), Hammett’s plucky, lovestruck secretary and Girl Friday, newly unemployed after her boss turned in his gumshoe license for a typewriter, and eager for adventure. While her girl-next-door gullibility would seemingly render her a poor accomplice to Rita’s con artist savvy, Evie manages to enlist Rita in another quixotic play for the “real” falcon that will take them across the country and the Atlantic in the coming days. Rita goes along agreeably at first, willing to postpone her plans to make it as an actress in Hollywood for a chance to separate Evie from the $4,500 she’s stowed somewhere in her luggage.

Thus, their adventure begins with a cross-country train ride, intermittently interrupted by Rita’s reading aloud from the novel she’s brought along—Dorothy G., Kansas. This book appears to be nothing less than the further adventures of Dorothy Gale, post-Oz, grown weary of the patronizing skepticism of those who dismiss her stories of witches and wizards and yellow-brick roads, and determined to put the black-and-white world of Kansas behind her and pursue modern womanhood in Greenwich Village.

Dorothy G., Kansas provides a compelling if sometimes perplexing secondary narrative in The Big Man’s Daughter, in its own way as inviting a rabbit hole as Sidney Orr’s blue notebook story in Paul Auster’s Oracle Night (itself a meta-meditation on Hammett’s Flitcraft Parable), and equally jarring and deflating when it’s abruptly (albeit reasonably) abandoned and sealed off from the rest of the novel.

As their travels progress, Rita and Evie muse in tandem on ideas from fiction, among them a notion culled from one of Hammett’s early stories that in the last moment of life, suspended between existence and non-existence, one might imagine and virtually experience the full span of another life unlived.

Rita’s affection for Dorothy G., Kansas encapsulates much of what makes her so intriguing: “Fiction was almost as effective an escape as laudanum,” she muses. “She liked the book, even if it was soft in parts. Perhaps she liked it because it was soft, she thought. Real life provided enough hardness. Why turn to fiction for something that was already around?”

To plunge into the fictional worlds of Gordon McAlpine novels is invariably to become entangled in ingenious twists on reality and narrative rarely found elsewhere, even when he’s re-imagining characters in worlds parallel to those invented by others, in this case Dashiell Hammett. Just as Hammett made imagined crime feel real, McAlpine makes metafiction mischief suffused with meaning; from the masterful Hammett Unwritten, to the too-wonderful-not-to-mention Woman with the Blue Pencil, and now the mesmerizing The Big Man’s Daughter, McAlpine’s novels prove as moving as they do dazzling.