The Big Lie: Motherhood, Feminism, and the Reality of the Biological Clock 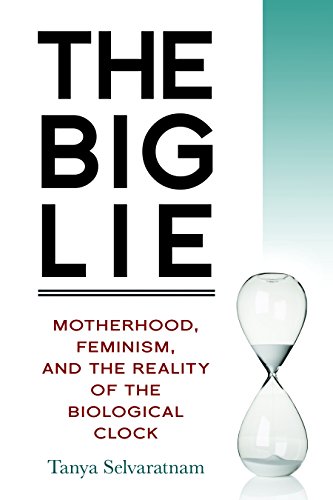 In The Big Lie: Motherhood, Feminism and the Reality of the Biological Clock Tanya Selvaratnam presents her own story of “heartbreak and self-discovery” relative to her attempts to become a mother at the relatively advanced age of 40 after having experienced three miscarriages. She notes that women tend not to talk among themselves about failed pregnancies, and overall women are not “conditioned to feel the urgency of fertility.”

Were women better informed they might consider, for example, freezing their eggs in their late 20s if they wish to postpone motherhood in the interests of the pursuing a career.

The Big Lie of the title, elaborated in Chapter 2, is “that women can do what they want on their own timetable.” The author reflects that like most women she grew up without ever really learning the most basic facts about the impact of delaying motherhood. ‘

“I could have educated myself, but how was I supposed to look for information?” She notes that sex education in high school and in college was totally inadequate with respect to the expiry date on her fertility.

Selvaratnam considers that feminism was the major purveyor of the Big Lie in that it created a world with new possibilities that enticed women to wait too until it was too late; “second wave feminism had given women the freedom to do whatever they wanted in the world. In step with that message, in vitro fertilization (IVF) which was successful for the first time in 1978, gave us unprecedented control over our reproductive futures. Feminism dovetailed perfectly with science and the two fed off one another. But this cosy partnership allowed for a serious omission: women have a finite amount of time in which to have a child, and no amount of independence can change that fact.”

She considers that her generation became the guinea pigs for pushing the limits of reproductive choice. She was in her senior year of college in 1992 which she claims has been dubbed “the Year of the Woman,” when four women enter the U.S. Senate bringing the total number to a modest six. She chronicles her own feminist activism and the confused pressures internal and external relative to childbearing.

The message repeated throughout this and later chapters is that women need to have much more information about their fertility and its limitations in addition to the now usually routine contraceptive information provided rather early in life. The critical factor is that even though women in their late 30s and 40s may nowadays remain young looking and active their fertility potential peaks between the ages of 16 and 28.

Having had so little information herself on which to make a better reproductive choice the author provides a plethora of references, contact addresses of clinics and doctors and details of treatments and medication throughout the entire book. At the end of the book there are a further 15 pages packed with suggested resources on fertility issues.

This book therefore belongs to an increasingly familiar though sometimes awkward genre which combines personal reflection on a critical phase in the life-cycle . . . in this case and very often fertility related . . . and information as to how help can be obtained should one finds oneself in similar circumstances as the author.

Selvaratnam further boosts the narrative of her personal journey with references which are very diverse and criss-cross the centuries. These references range from her own friends, family, and doctors to movie stars, rappers, Hillary Clinton “in a pink suit” and Margaret Sanger “in the early 1900s.”

Overall the effect of the attempt to link with the broader narrative of feminism is a bit random and unstructured. She is by no means the only writer to balk at this challenge. Perhaps it would have been more effective to present herself more simply and directly as the human face behind the statistics on fertility treatments and their effectiveness. Instead the author ranges through anthropology, and evolutionary biology; and as she would see it, the less than accurate presentation of fertility issues by “the media.”

While she is to be applauded by her attempt to see the many dimensions of feminism and motherhood her reach exceeds her grasp and much of this reads like rather desperate padding of the basic story.

She reaches eventually the rather obvious conclusion that there are many examples “of how public education campaigns combined with policy reform can result in new patterns that benefit society. By taking a hard look at the interplay of evolution—both biological and cultural—and delaying motherhood, we can identify ways to make the situation more sustainable. We can ensure more prepared generations of prospective mothers.”

Whilst most of the book is concerned with how women can cope with and counteract the Big Lie fed to them by feminism it is noted that infertility is also a male problem, though one that relatively few men appear to take seriously. In fact not unusually the issue of fertility and parenthood is dealt with primarily as a woman’s issue and problem throughout the book.

In the closing chapter of the book—Action Items for the Future—the reader is advised not to be afraid of feminism because it is (another) Big Lie that we don’t need feminism. It is not clear how she sees these different Big Lies as brackets to her basic argument. Another striking insight is that is it is necessary to encourage men to participate in childcare as well following the example of, naturally, some Scandinavian countries, Belgium, and Israel.

As the author says her personal story is “a work-in-progress.” It is also both sufficiently dramatic and sufficiently typical to have sustained the reader’s interest without some of the many diversions into which she felt obliged to wander.