A Big Important Art Book (Now with Women): Profiles of Unstoppable Female Artists—and Projects to Help You Become One 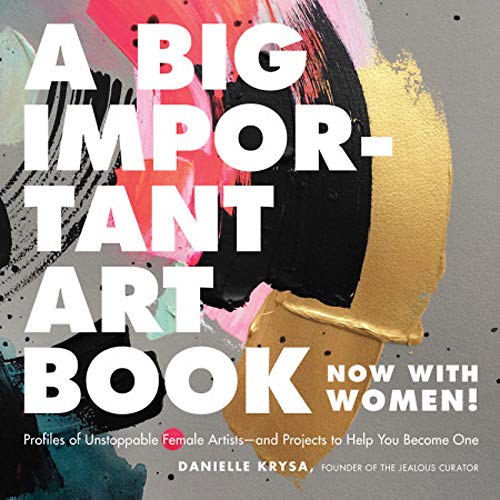 “Compliments to Krysa for recognizing the greatness in these women. A Big Important Art Book (Now with Women) is the right project, delivered in the right manner, at the right time.”

In 1989 a group of anonymous female activist artists created a scene of protest/awareness with a piece called “Do Women Have to be Naked to Get into the Met. Museum?” On this piece is a parody of a Titian (or a Velazquez, or a Delacroix, or an Ingres, or a Renoir) reclining nude (or Venus, or Olympia, or Odalisque) wearing a gorilla mask. The statistics cited on the print point out that “Less than 5% of the artists in the Modern Art Sections are women, but 85% of the nudes are female.” Such is the state of the art world.

However, Danielle Krysa is doing her part to change these facts and not through controversy, gimmicks, or protest. Her approach is respectable, intelligent, holistic, confident and, well, feminine. A Big Important Art Book (Now with Women) is not a girly-girl craft book, but an insight into the world of 45 hard core, courageous, professional artists who happen to be women.

Struggling with her own art direction after graduating with a BFA in Visual Arts, Krysa found she was jealous of other women who made a go at a career with a paint brush, or any other art material for that matter. She researched some of these women and dug into the details behind their decisions, inspirations, and directions and pulled them together, highlighting them and their work on a website she called The Jealous Curator.

A Big Important Art Book (Now with Women) is a natural extension of Krysa’s website. In it she chapters three artists together based on style, materials, concepts, or subject matter. Each of the 15 groupings opens with a page of inspiration, suggesting how the reader might experiment with the type of art demonstrated and create their own projects with a twist.

With so many diverse individuals sharing space in these pages, one can’t help but be in awe at some point. The ranges of thoughts, intentions, and approaches push pre-established boundaries of what constitutes art as well as what art one thinks one is really capable of producing. More often than not, a person starts their artist journey with one plan in mind and things happen to force reconsideration. Each of these artists chose a way to work with life’s shifts in remarkable ways.

One American artist, for example, Janet Echelman, went from classical piano to filmmaking, to counseling psychology, not taking a drawing class until college. She went from Harvard to Hong Kong to Bali to India. She intended to paint in India and document her experiences for her Fulbright proposal. Instead she ended up collaborating with fisherman to make netted sculptures which she would hoist into the air to photograph.

Echelman subsequently transformed her fishing net projects into huge illuminated public art installations measuring upwards of 180 by 180 by 24 feet. These pieces have been seen across the world from Denver, CO, to Porto, Portugal, to Amsterdam, Netherlands, and beyond. She’s won a Guggenheim Fellowship, given a TED talk, and received awards from Architectural Digest and the Smithsonian.

Far from being intimidating, Echelman’s experience is just the opposite. It is a solid example of what heights can be reached by taking a step or two and being flexible and creative with your plan. And in case you encounter mental blocks along the way, just refer back to the 44 other artists in the book who are equally amazing people.

Every single one of these artists has the potential to be hanging in the Metropolitan Museum, and not with a gorilla mask hiding their identity, nor because they are naked, nor with any other obnoxious tactic screeching for attention, but because they demonstrate the qualities that accompany fine art: honest to goodness intelligent hard work, uncompromising dedication to quality of craft, unique personality, and a talented spirit.

Compliments to Krysa for recognizing the greatness in these women. A Big Important Art Book (Now with Women) is the right project, delivered in the right manner, at the right time.