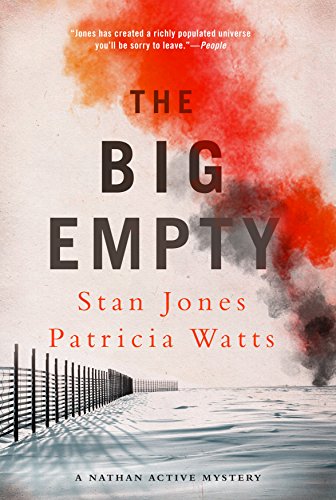 “A thoroughly enjoyable book with an easy going, easy to follow plot, and characters who feel like dear friends . . .”

Fans of Alaska mysteries will devour this book. And if you're not a fan now, chances are you'll become one after reading The Big Empty.

There is something especially compelling about books set in Alaska. They seem to elicit the same passion and exhilaration of Old West Frontier stories. High adventure (or misadventure,) the heart pounding thrill of the unknown, the giddiness of the unfamiliar, the nerve grinding prospect of weather that can kill you, the lure of isolated uninhabited places, and the simplicity and hardship of minimalist living, which even today despite the presence of cell phones, computers and other technology, is present to some degree in everyday Alaskan life.

The very wild and wooliness of it is enough of a lure for some to hop on a plane, get behind a steering wheel, or stand on the highway with a thumb out. If ever you wanted (or needed) to hide out or get lost, Alaska would be a pretty good place to do it. It's a place where people can have a bunch of huskies that are half wolf.

The Big Empty starts with Chukchi police chief Nathan Active and bush pilot Cowboy Decker (even the character names evoke thoughts of Alaska) are searching for a downed plane in the wilderness that had been flown by Evie Kavoonah, a pregnant, well known, and very experienced pilot. The official investigative report attributed the probable cause of the crash to lack of adequate fuel. Plain and simple—she ran out of gas.

Cowboy, who loves Evie like a daughter and personally taught her to fly, is beside himself with grief and guilt. He insists Evie would never have neglected to confirm fuel levels during her preflight check, and he doesn't buy the report's conclusion of pilot error. He suspects foul play, convinced someone jimmied the fuel system. Nathan is less inclined to question the result of the official report. To him, it's pretty conclusive, but Cowboy is determined to prove it's wrong.

By personally going to the crash site and taking the airplane apart piece by piece. He insists Nathan go with him.

Nathan, who has a pregnant wife at home, reluctantly considers this, thinking to himself:

"A murder investigation on a mountainside 150 miles into the wilderness with a grief-crazed Bush pilot in charge? . . . uphill? . . . not to mention mosquitoes . . . and grizzlies."

But Nathan gives in and they make their way to the crash site. Cowboy indeed takes the plane apart piece by piece, and the murder weapon they find in the wing baffles them completely:

In much of the book, nothing is what it seems as the investigation moves forward. Most of the chapters end on a hook that will keep readers gleefully turning pages. As a bonus, the authors give a mini-crash course on weather balloons and how they work. Surprisingly, it's a one-person task.

Author Stan Jones lives in Alaska and is a real-life bush pilot. Co-author Patricia Watts spent ten years as a human rights investigator in Anchorage. This no doubt accounts for the authenticity of this book and its characters. Reading it is like watching a movie of it. Or better, like being there:

". . . The pilot fell silent again. He pulled at his lip and took a pack of Marlboros out of his bomber jacket, tapped them on his knee, and put them away."

"Cowboy frowned in thought as he drew the Marlboro pack out again. He fished inside with an index finger, snagged a lone broken cigarette, then crumpled it and the pack and tossed them on the table."

Can't you just see that? Maybe you actually have seen someone do that. Huge credit to the talented authors to conjure such genuine word pictures.

"Monique rolled her eyes and slumped in the chair. She threw one leg over the other and started pumping the foot up and down with such fury that Active thought she might lose a shoe."

A thoroughly enjoyable book with an easy going, easy to follow plot, and characters who feel like dear friends by the end. Readers will be inspired to search out the authors' other books, as well as watch for new ones to come.