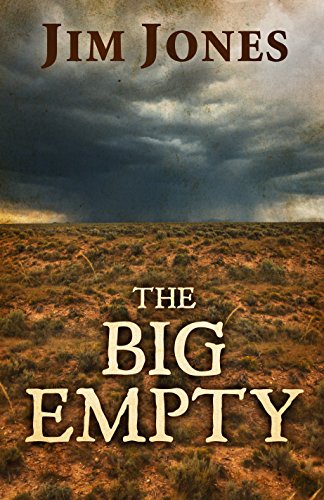 The year is 1886, the place is Colfax County, New Mexico, and the situation is tense. Deputy Sheriff Tommy Stallings is tracking psychopathic bank robber Jake Flynt and his gang. Flynt has been raiding and burning out sodbusters, bullwhipping them for fun into the bargain, and when Flynt robs the bank in Cimarron, Tommy is drawn into a mystery. Dirt-poor rancher Garrett O'Donnell was seen by witnesses alongside Flynt and his gang. Why would an ordinary man with a wife and kids throw in with these dangerous desperados?

Jim Jones is a popular Western singer/songwriter who is also the author of the Jared Delany series of Western novels including Rustler's Moon (2011), Colorado Moon (2011) and Waning Moon (2013). The Big Empty takes place in the same imaginary world, featuring several secondary characters who cross over from his main series, including Jared Delany himself. This familiarity will make Jones' latest offering a welcome addition for his current fans, but new readers will struggle with several problems that make this novel less than completely satisfying.

Jones uses the first-person point of view to tell Tommy’s portion of the story, and while it gives readers a close look at the deputy’s thought processes as he works his way through the problems associated with Flynt’s rampages and O’Donnell’s disappearance, it fails as an effective attempt at characterization. His struggles to provide Tommy with an authentic 19th century cowboy “voice” result in clunky passages such as: “about that time, I feel like a durned fool for shooting off my mouth . . . I decided to shorten my speech and find out what he was really thinking. I was mad as a scalded dog though. I’m not kidding about that.” His uneven vocabulary also results in awkward compromises: “I don’t see the sense in it. It has to be that Burr coerced him into it. Coerced is another one of those fancy words I learned from Mollie.” The result is a self-conscious, inconsistent narrative voice that falls far short of the standard set by Louis L’Amour, Owen Wister, and other successful writers of Western novels.

Tommy’s self-consciousness also extends to his desire to be taken seriously as a mature deputy sheriff, and he constantly demands that people call him “Tom” instead of “Tommy,” which he thinks makes him seem too adolescent. This happens often enough throughout the story to become tiresome, and when he asks the sheriff in the final line in the novel, “I would appreciate it if you’d try harder to call me Tom . . . Tommy is a little boy’s name. I’m a grown man,” readers are so worn out by the name thing that they pretty much don’t care at all what the other characters call him.

When not telling the story from Tommy’s point of view, Jones drops into third-person narrative to piece together the rest of the plot by following other characters such as the repulsive Jake Flynt and various of his sidekicks, Sheriff Tomás Marés, and Garrett O’Donnell. Mixing first person and third person is never a good idea, and in The Big Empty it often ends up in anti-climax, undercutting Tommy’s investigation of the mystery.

In chapter 14, for example, we catch up with Garrett O’Donnell in a brief reunion with his wife that answers some questions about O’Donnell’s motivation and tactics, but in the following chapter we are forced to struggle once again through Tommy’s circular speculations as he “pondered all this for awhile without getting any closer to figuring it out.” As a result, the story plods along like a tired mule with too much gear strapped to its back.

Occasionally, though, Jones manages to hit a clear note that livens up his prose. As Tommy edges up Buckhorn Mesa, looking for Flynt’s campsite, he quips, “I believe I mentioned before that I was adept at sneaking up on folks. I’m not sure that’s what I’d want as an epitaph on my gravestone but I figure it’s a skill that’ll prolong the time before I need one.”

Passages like this one provide relief in an otherwise dissatisfying novel, and while they won’t be enough to convince new readers to come back for more of Jones’ novels, they should be enough to satisfy his fan base’s hankering for more shootin’ and trackin’ in the colorful world of Jared Delany and his associates.