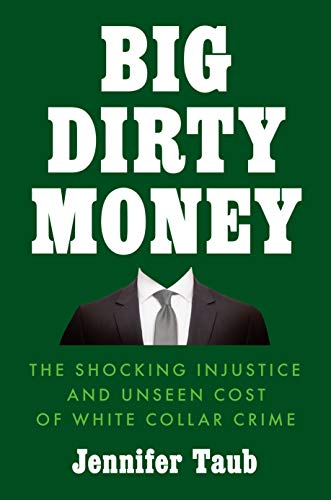 In one of the most notorious stories of elite privilege in Jennifer Taub’s important book, a multi-billion-dollar enterprise successfully grows by “knowingly spreading the scourge of opioid addiction to millions of Americans.” Purdue Pharma's OxyContin, its painkiller, is “extremely addictive.” Released to the public in 1996, the drug earns $35 billion for the Sacklers, who become one of the nation’s 20 richest families.

In the same period, more than 232,000 Americans died of prescription opioid overdoses. The Sacklers, meantime, managed to move huge sums of money secretly around the world. While the case is still in litigation, there is reason to think their personal financial consequences “will likely be minimal,” says the author. They may not face any criminal punishment.

As Taub makes clear in her authoritative, highly accessible, and damning Big Dirty Money: The Shocking Injustice and Unseen Cost of White Collar Crime, the Sackler family’s role in the nation’s opioid crisis represents just another day at the office for white collar crime in America.

Other recent corporate criminals have included executives at Pacific Gas & Electric, who paid nearly $5 billion in dividends to shareholders rather than upgrade aging power lines that sparked the 2018 Camp Fire in California, killing 85 people; General Motors executives, whose cars with faulty ignition switches killed some 124 people before a 2014 recall; and Wells Fargo leaders, who pressured employees to open checking, savings, and credit card accounts without customer consent. The firm charged customers with overdraft fees, fired would-be whistle-blowing employees, and made a $134 million exit payment to its CEO who had resigned in “shame.”

And on it goes, from the audacious blood-testing fraud at Theranos, to the irregularities at the startup WeWork, which in 2019 left thousands of employees with no work and gave its CEO a $1.7 billion [stet] golden parachute.

Without doubt, these stories are familiar. And that’s a problem. Repeated corporate hijinks become familiar, expected, and seemingly acceptable. They carry few harsh penalties for perpetrators. That signals a clear coast for others bent on fraud, embezzlement, and other crimes, says the author, a law professor at Western New England University.

Consider: There are no mandatory minimums for federal crimes commonly committed by white collar offenders. Many white collar offenses disappear into the ether under the cloak of DPAs (deferred prosecution agreements, a form of probation) and NPAs (non-prosecution agreements). “From cradle to grave, there is an implicit immunity from criminal consequences for the megamoney set,” writes Taub.

Also, some regulatory agencies are underfunded. Others are “possibly complicit.”

And the public? The poor and middle class suffer “significant losses” as a result of white collar crime. For victims of specific offenses, that amounts to between $300 and 800 billion a year. (Street level crime costs about $16 billion yearly.) More generally, corporate crime “undermines” trust in the rule of law, and reduces available tax monies for road repairs and other vital services.

Taub offers a smart overview of white collar crime, a term coined in 1939 by sociologist Edwin Sutherland. She notes that in eras when “the people” have more influence and control, corporate leaders are held responsible. In the Progressive Era, for instance. In our own time—the Trump era—not so much.

“Donald Trump was not the first privileged American to use apparent unlawful behavior to gain and sustain power and wealth—and then to use that wealth to gain immunity from further offenses,” she writes. “What makes him unique, though, is how high he climbed.”

Taub urges reforms, including creation of a new Justice Department division focused on big-money criminals, establishing a nationwide registry of white collar criminal offenders, and staffing up the IRS so it can audit tax evaders and collect billions of dollars in already identified tax receipts.

The author is a realist. “From prep school and beyond, the elite cover for each other,” she writes. Nonetheless, strengthening government’s ability to act can only help.  It might even prevent future Donald Trumps.