The Big Book of Birds 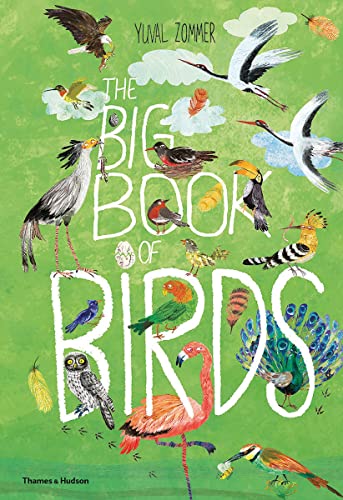 “Budding naturalists—or any child with an inquisitive mind—will delight in the opportunity to learn so much in such an amusing, well-written book.”

With the assistance of bird expert Barbara Taylor, author and illustrator Yuval Zommer has created a lively book filled with fun, fascinating facts about birds of the world.

Readers learn that a bird’s feathers are made from keratin, the same material that makes up human hair and nails. The feathers around the eyes of great gray owl form disks that act like satellite dishes and direct sound into its ears.

Secretary birds aren’t typists. They are named for the crest of long black feathers on their head that look like quill pens. They eat snakes, which they kill by stamping on them and pecking them with their sharp beaks. Nightjars feed on the wing, scooping up flies in their large beaks as they glide through the air.

Bald eagles have wide wing spans that allow them to fly as high as 10,000 feet above the ground, nearly seven times higher than the Empire State Building. Emus can’t fly, but they can run at speeds up to 30 miles per hour. Puffins are even faster. They can fly as fast as a car on a highway, reaching speeds of 55 miles per hour! A baby puffin is called a puffling.

The Asian tailorbird makes a pocket for its nest by sewing two leaves together using spiders’ webs for thread. Baby songbirds begin learning to sing when they are just 10 days old.

Hidden randomly throughout the book’s pages is an egg, which the author-illustrator challenges readers to find. This devise encourages young readers to be more observant, studying each page to find the hidden egg.

Zommer’s accompanying illustrations are lively, colorful, and quirky, although it is disconcerting to have both eyes drawn on one side of the head in all the profile images. The pages devoted to swans are particularly creepy with 22 eyes staring out from the side of the heads of the 11 swans depicted on the double page spread, plus an additional 16 eyes belonging to the profiles of the four signets, two ducks, and two great blue herons also included on the pages.

Despite the issue with so many eyes (yes, yes, Picasso did it, but not one canvas with 38 eyes peering out from the subjects’ profiles), this book is a treasure trove of fascinating avian facts. Budding naturalists—or any child with an inquisitive mind—will delight in the opportunity to learn so much in such an amusing, well-written book.