Bi: The Hidden Culture, History, and Science of Bisexuality 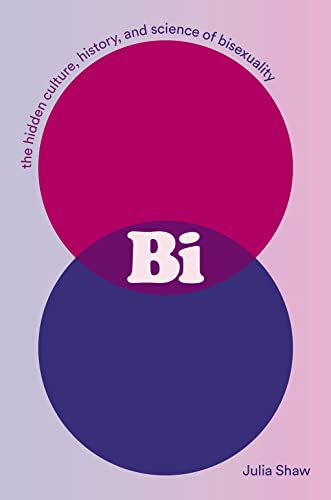 Aware of the controversy and skepticism surrounding bisexuality, the author Julia Shaw, herself bisexual, sets out to trace the lineage of this condition that she insists is not “mysterious, threatening or performative . . . or even cool, woke or transcendental. It is a normal part of sexuality.”

She notes that the word was first used in English with reference to human beings (as opposed to hermaphroditic plants and animals) in 1892 in the translation of a work by the famous German psychiatrist Richard von Krafft-Ebbing, writing about “sexual disorders” in male prisoners.

A more taxonomic and apparently objective rating came much later in the 1930s from the biologist Alfred Kinsey, whose Heterosexual-Homosexual Rating scale featured five out of seven options “within the bisexual universe,” though the term itself was not used. Other tools emerged in the 1960s such as the Klein Sexual Orientation Grid that enabled psychologists and their patients “to structure a conversation about sexuality.”

Shaw herself uses the term “bisexual” or “bi” as an umbrella term covering people who identify as bisexual, pansexual, plurisexual, polysexual, sexually fluid, bi-curious, and questioning.” This is a riposte to those critics of bisexuality who insist that bisexuals reinforce binary thinking rather than emphasizing the spectrum or continuum of possibilities. Whether Shaw’s very catholic usage will garner a lot of fans is open to question.

With wit and humour Shaw introduces the milestones and celebrities of bi history. “Queer history is particularly important because it can help to normalize queer identities and lives.” She writes well and engagingly and draws readers in, urging them to continue to ask questions about their own sexuality, and to test themselves against the grids and scales she presents.

One of the most important influences was Havelock Ellis whose book Sexual Inversion (Third Edition 1927) contains some of the earliest and still influential discussions of bisexuality before it became part of the general conversation.

Freud of course had something to say though his views are not so widely respected today. He believed that we are all born bisexual, and in adulthood the condition, preference and practice should be considered immature and even linked with hysteria. The belief that we are all potentially bisexual however does not seem too different from some of Shaw’s own statements on sexual spectrum and potentials though she now rejects a genetic or biological basis.

In Shaw’s own lifetime bisexuality, particularly among men, was further stigmatized by being linked to the massive spread of the AIDS epidemic. At the same time this crisis created the need in the 1980s and 1990s for bisexual people to organize among themselves, and for more scholarly and activist attention to be given to bisexuality.

Shaw pays the now obligatory attention to the same-sexual behavior of the growing range of species (“as a side note, I feel like starfish should be the mascots for queerness”) known to “indulge” in non-heterosexual behavior, revisiting the arguments around the Darwinian Paradox which stressed the unimportance even the danger to the species concerned of non-reproductive sex. Critics of Darwin speculate that perhaps heterosexuality rather than bisexuality is a later “fluke.”

Shaw presents in detail the range of discriminations and prejudice faced by bisexuals and insists on the importance of building bi-communities and bi-spaces and better media representation. Until 2014 Google didn’t propose anything if people searched for bisexual. She discusses ways and means for bisexuals in monogamous relationships to maintain their bi-visibility.

This part of her discussion, while always erudite and engaging, also creates some kind of dissonance with the earlier part of her book, with its persuasive focus on the absolute normality, and even banality of bisexuality. The situation is chicken and egg; until bisexuality is normalized people will have to insist that it is a distinct category! We are still some way from the recognition that, “It is not a bi thing but a human thing to be attracted to multiple people.”

Shaw wrote this book “because this book didn’t exist,” and though she still has many questions “at least now I know some of the terms and frameworks which can help me structure my thoughts.” We can all be grateful to her for her skilful and sympathetic presentation of her discoveries.