Beyond Trans: Does Gender Matter? 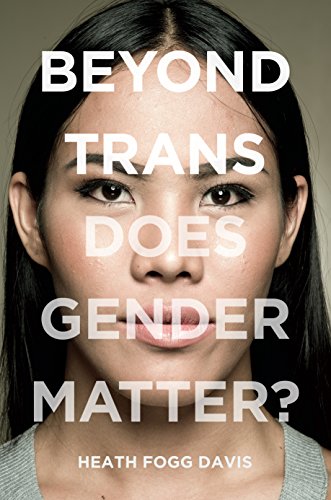 “This book falls short of providing practical and achievable suggestions for achieving the goal of protecting people from sex classification based discrimination.”

According to the author, this book grew out of his article, “Sex Classification Policies as Transgender Discrimination: An Intersectional Critique” that was published in 2014 in Perspectives on Politics.

Alas, the book is little more than an expanded version of an article. It quickly becomes apparent the author struggled to fill 208 pages. He repeats, restates, and reiterates the same examples, often using the same language. In his Introduction, Davis breaks down each chapter and states what will be covered. This is comparable to the protocol for an academic article but the promises lack fulfillment.

This is unfortunate because the author’s premise is intriguing. He posits the theory that society would be better off with “fewer sex-classification policies.” He proposes using the “basic structure of antidiscrimination law” to make it happen. Davis suggests this kind of “legalism” is not adversarial. In that, if recent events are any indication, he is mistaken.

Transgender issues are cropping up in a variety of situations. States are enacting laws limiting bathroom use by transgender individuals. Federal courts cannot agree on whether Title VII of the 1964 Civil Rights Act applies to LGBTQ individuals. The U.S. Departments of Justice and Education are backtracking on previous positions that support using current federal laws to protect the LGBTQ community from discrimination. The problems are significant and the resolutions not readily apparent.

Beyond Trans begins with a story about a preposterous program sponsored by the Southeastern Pennsylvania Transportation Authority (SEPTA) that required a person’s gender to be listed on transit passes. This is a problem for transgender women whose government issued identification does not accurately reflect their identity. Sex classification policies also adversely affect cisgender women who did not present a stereotypical feminine appearance. They do not “look” like women are supposed to look. They are subjected to invasive questions such as “What are you?”

The “gender marker” issue is complicated. Some states require a person to undergo a surgical procedure before it will allow a gender marker to be changed on government issued identification. Many transgender men and women cannot afford this expense. Four states (OH, ID, TN, AR) do not allow a person to change the gender marker on birth certificates.

Traditional sex classifications are limited to male or female. This level of unfairness does not obviate its existence and acceptance by the vast majority of people.

Convincing society to accept a non-binary sex classification is a new concept. State and federal legislators have not considered the impact of laws on people who do not conform to the binary classification. A statistically significant number of people do not fit into the binary because some are transgender, others are born with ambiguous genitalia that obscure their gender, and still others prefer to remain gender neutral. Raising the issue is important but it will take time and significant effort for the law and the public to consider and resolve the issue.

Davis does a good job of relaying the problems transgender and gender-nonconforming persons experience. From that perspective, the book introduces readers to a subject with which most may be unfamiliar.

A major problem with the book is the simplistic nature of the proposed solutions and the author’s assumption that the whole thing is obvious. The author thinks that using existing the format of antidiscrimination laws will miraculously resolve the problem. This reflects a lack of understanding regarding the legal system and a court’s ability to apply existing law to a complicated scenario, especially when the premise on which Davis bases everything is not yet agreed upon.

The author promises “pragmatic recommendations for how individuals can rethink and redesign the administration of sex in the policy venues of identity documents, restrooms, college admissions and sports” in each chapter. His suggestions fail to incorporate or acknowledge the difficulties of getting the majority cisgender population to buy into his theories. And, the author does not provide any guidance on how that is to be accomplished.

In order to implement the author’s recommendations, the state legislatures of all 50 states must rewrite laws to provide for either a more expansive view of gender or fewer requirements where gender and one’s sex classification is required. The alternative of having state and federal courts interpret existing laws to expand, or abolish government sponsored sex classification policies, is equally farfetched.

While the LGBT community has made progress over the past quarter century in obtaining basic civil rights, continued progress is endangered.

The author is proposing a sea change of understanding by average people about what “sex,” “gender,” and “sexual orientation” means. The concepts of someone being “transgender” is foreign to most people. And a person who identifies as “gender nonconforming” is confusing. The majority of people view “sex” and “gender” as synonymous.

Allowing people to change their gender markers on government issued documents is a start. But, it will not result in transgender persons not being asked, “What are you?” That will take more than legislative action.

Davis presents a legitimate concern facing the transgender community. But his recommended solutions fail to consider the need to educate the larger society, in order to overcome overwhelming odds against obtaining a rational resolution. The LGBTQ community has achieved a great deal but much remains to be done.

He provides a guide for conducting a gender audit that organizations can use. It is based on a 90-minute workshop he conducts. The workshop “builds critical awareness about the different identities beneath the umbrella term “transgender” and the forms of direct and indirect discrimination that trans people face in the United States.” The workshop also introduces participants to “the principle of inclusive policy design” so organizations can develop a trans-inclusive policy or practice that “benefits everyone affected by the policy.”

The workshop is an admirable addition to the book and is worth promoting. However, the author does not indicate how successful these workshops have been or the number of companies that have held them. Further, there is no indication of whether any company has implemented a new sex classification policy that is “tailored to their organizational needs and aspirations.” Many, but not all, large companies rewrote their non-discrimination policies to include “sexual orientation” and “gender identity.”

This book falls short of providing practical and achievable suggestions for achieving the goal of protecting people from sex classification based discrimination.