Beyond Those Distant Stars 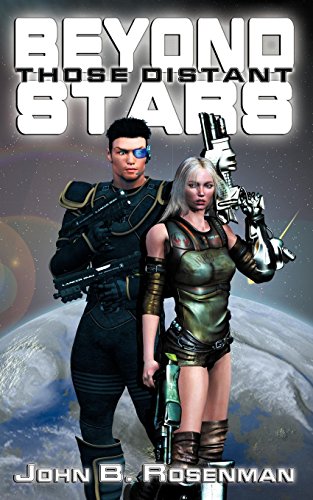 Beyond Those Distant Stars is science fiction that plays well to a female audience. The heroine, Stella McMasters, is a cyborg. After an accident at a radiation facility, her remaining essence is transplanted into a mechanical body. Through a futuristic Affirmative Action program, Stella is promoted to commander of a spacecraft due to her synthetic status. Her robotic body is a source of extraordinary physical prowess, but it leaves her feeling inadequate around members of the opposite sex.

She immediately feels a strong physical desire for Jason, the ship’s captain. While fulfilling his piloting duties, Jason’s brain is temporarily removed from his body. Still, he develops a relationship with Stella through the ship’s communication system. After seeing Jason’s naked body in its suspended state, Stella indulges in several R-rated fantasies. Yet she feels Jason, upon returning to his body, will be repulsed by her infertile state.

Their love story plays against the backdrop of an intergalactic war. The enemy is led by a God-like entity called the All-Mother. After boarding an enemy vessel, Stella is drawn into a mind meld with one of the All-Mother’s alien sons. She gains an innate knowledge on how to operate the foreign ship as well as a direct mental link with the All-Mother herself. These extraordinary abilities, along with her cyborg status, arouse the suspicions of her superiors. Her motives are questioned and her loyalty is suspect. Many believe she is a traitor.

Vice is running rampant throughout the empire. Humanity is ruled by a child emperor, who is being drugged by his supposed protector. Insubordination in the chain of command is a common occurrence. Few can be trusted to maintain order, let alone win the war. Enter Stella and her extraordinary claims. General Gage, a fellow female in a position of authority, is the commander of the Loran Base, where Stella takes the alien ship. Gage believes Stella’s story and does everything in her power to help her arrive at a culminating one-on-one battle with the All-Mother.

Rosenman fills each page with a source of tension that unfurls the plot at a rapid pace. The reader feels at one with Stella as she single-handedly turns the tide of an entire war. Her feeling of otherness, brought about by her new body, allows her to establish a unique connection with the All-Mother. Her passion for Jason is put to the test and she must choose between her personal longings and the good of humanity.