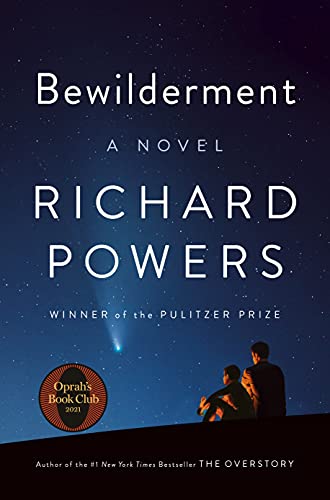 "We take for granted the plants and animals with whom we share our environment, even as we steadily destroy it. Action must be taken if we have any hope of avoiding catastrophe.”

It’s easy to forget about the vastness of the universe when the challenges of everyday life threaten to overwhelm us. When we do take a moment to contemplate what might exist beyond our own planet, say when we look up at the star-studded night sky, it’s easy to forget how insignificant we are. It’s just as easy to forget in our busy lives that we share the planet with hundreds of thousands of other species, many of which are threatened with extinction because of humankind’s very existence and arrogance.

Bewilderment, the new novel from Richard Powers, winner of the Pulitzer Prize for the acclaimed novel Overstory, attempts to look both at the minutiae of life on Earth and the bigger picture—our place among the stars. While lacking some of the depth of Overstory, Bewilderment is another important and timely entry in the growing genre of environmental literature.

Theo Byrne is an astrobiologist, a scientist concerned with life forms that might or might not exist beyond Earth’s atmosphere. Using powerful telescopes aimed into deep space, Byrne and others hope to pick up signals from these distant life forms, knowing that even if they do, because of the vast distances traveled by those signals, they might have originated millions of years earlier. He tries to share his passion for the remote exploration of exo-planets with his son Robin, a curious nine year old who also happens to be on the autism spectrum.

While Robin does find Byrne’s search for extra-terrestrial lifeforms fascinating and loves his father’s made-up stories about visiting other planets and encountering their nearly unimaginable inhabitants, he is even more concerned with protecting endangered species on this planet. Robin’s concern is something he learned from his mother, a lawyer and animal rights activist who recently died in an automobile accident. Byrne is looking up at the stars, but Robin is looking down, at the plants and animals whose futures are uncertain because of human encroachment of habitats and the spreading consequences of climate change.

That uncertainty is exacerbated by accelerating political winds, raging conservatism promoted by a Trump-like president who undermines American democracy, foments xenophobia, and, in an anti-science fervor, cancels funding for the telescope that might, finally, open the doors for Byrne’s research.

The real story, here, however, is Robin’s journey. Reluctant to allow doctors to treat his son with drugs but losing patience with the boy’s uncontrollable behavior, Byrne enrolls him in a Decoded Neurofeedback study run by Martin Currier, a friend of Byrne’s late wife. Currier explains that the subject’s brain connectivity patterns are compared to a prerecorded template. “Then we’ll shape that spontaneous activity through visual and auditory cues. We’ll start him on the composite patterns of people who have achieved high levels of composure through years of meditation.” The brain pattern used to retrain Robin’s brain happens to be his mother’s, which gives him access to her serenity, her overwhelming empathy, and even, Byrne suspects, her knowledge of the plants and animals she wanted to protect.

Based on actual science, at times Bewilderment reads like the science fiction that Byrne favored as a child. Scattered throughout the book, in fact, are episodes where Byrne and Robin seem to be visiting other planets. The first of these, just 14 pages into the book, is a puzzle because the reader doesn’t know quite what is happening. “I took him to the planet Dvau, about the size and warmth of ours. It had mountains and plains and surface water, a thick atmosphere with clouds, wind, and rain . . . It looks like here, Dad? It looks like Earth?” But then Byrne and Robin visit other planets, and we begin to understand.

The reader is tempted to derive meaning from the names of these planets. Is it significant that Dvau means two in Sanskrit and the planet seems to be a near replica of our own? Or that Falasha is a reference to Ethiopian Jews and is the name of a planet that “got ejected during its home system’s troubled youth”? Or that Pelagos means “sea” in Greek and is Byrne’s name for a planet covered completely by water? We could go on, but the reader might prefer to make these discoveries herself.

Ultimately, Bewilderment is a clarion call. Young Robin is absolutely right that humans threaten the survival of the very planet on which we depend for life. We take for granted the plants and animals with whom we share our environment, even as we steadily destroy it. Action must be taken if we have any hope of avoiding catastrophe. At the same time, we would be foolish to discontinue our search for life beyond our own atmosphere, and we abandon science at our peril.