Beware of the Crocodile 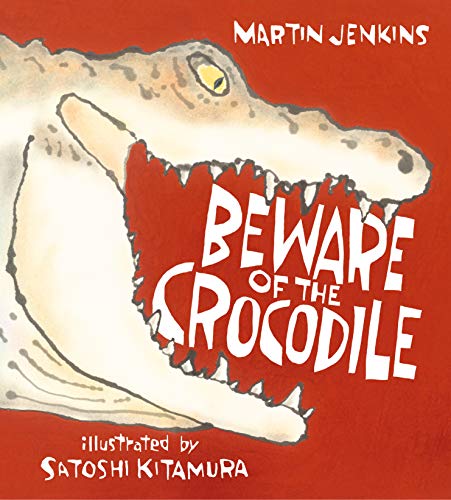 “It may be hard to love a crocodile but, by taking a humorous approach, Beware of the Crocodile manages to make this fearsome reptile almost endearing. The combination of informative, non-judgemental text and delightful illustrations makes this a perfect gift for any child who loves animals.”

Beware of the Crocodile is a charming book about an animal that few would regard as charming. The “beware” warning in the title is backed up on the first spread with “they’re really scary” and “They’ve got an awful lot of . . . teeth.” All of which will be irresistible to the child who enjoys thrills.

The book doesn’t shy away from the less than endearing aspects of crocodile behavior, but it does spare us the grisly details of the particularly nasty way in which crocodiles use a death-roll to dismember large prey. We’re told “What happens next is rather gruesome. In fact it’s so gruesome that we should skip the details.”

This passage of text is accompanied by an illustration of a very large crocodile about to engulf a hapless wild pig. The discrepancy in their sizes helps to convey the enormous size of the saltwater crocodile, but it also means the prey animal would be swallowed in one gulp and spared the horrors of the death-roll.

Despite the scene it depicts, the illustration is more humorous than distressing, with a suitably evil-looking croc and a suitably alarmed-looking pig. In contrast the satiated crocodile on the next page looks positively benign as it basks on a sandbank with little birds sitting or landing on its back.

The delightful watercolor illustrations by Satoshi Kitamura convey the croc’s facial expressions with wit and humor. There’s an amusing illustration on the information page at the back that shows a crocodile seated at table viewing a menu which includes, under today’s specials, baby croc and human. The menu is upside down so it can be edited, if so desired, by parents reading to their children. Nowhere else does the book mention that crocodiles eat humans, though it does allude to this by saying “they’re not at all picky about what they eat, as long as it’s got a bit of meat on it.”

The Nile crocodile is said to be responsible for more attacks on humans than all other predators of humans combined. It outstrips the even larger saltwater crocodile that’s the subject of this book. In contrast to other big predators, who only attack humans in unusual circumstances, all the big crocodilians relish human flesh. The Nile croc tops the list only because of opportunity—more people live near it than the saltwater croc.

The text by conservation biologist Martin Jenkins conveys considerable information on these fascinating reptiles in a style that’s both humorous and wonderfully accessible for the picture book audience. We learn how the mother crocodile cares for her young, tends her nest, helps the hatchlings into the water, and guards them for months. All very necessary to ensure their survival when there are so many predators about— including other crocodiles and “sometimes even the baby crocodiles’ own fathers!”

At the back of the book there’s some general information about crocodiles and their relatives, and we learn that “the ones in this book are saltwater crocodiles, the biggest kind—they can be 20–23 feet (6 to 7 meters) long.” Beware of the Crocodile provides two website listings for those wanting to find out more about crocodilians and concludes with an index that hardly seems necessary for so short a book.

It may be hard to love a crocodile but, by taking a humorous approach, Beware of the Crocodile manages to make this fearsome reptile almost endearing. The combination of informative, non-judgemental text and delightful illustrations makes this a perfect gift for any child who loves animals.