Between You & Me: Confessions of a Comma Queen 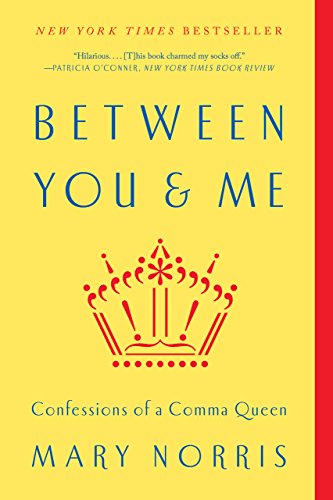 “Let’s get one thing straight right from the beginning,” says Mary Norris. “I didn’t set out to be a comma queen. The first job I ever had, the summer I was 15, was checking feet at a public pool in Cleveland.”

As if that isn’t odd enough, she became a “milkwoman,” too, but that’s another (funny) story entirely in this almost certainly unique part- memoir/part-history/part-style guide of a book.

“. . . you put the milk between the storm door and the inside door, and shouted ‘Milkman!’ I wasn’t a man, but I didn’t like the word ‘lady’—it seemed too feminist—so I wouldn’t holler ‘Milklady!’, and ‘milkmaid’ was a little too fanciful,” Ms. Norris recalls. “I settled for ‘milkwoman,’ which was a bit too anatomically correct and made me sound like a wet nurse.” (And maybe that’s what laid the foundation for her admitted confusion—style-wise, that is—about sex and gender, covered at length later on in the book.)

Whether she intended to or not, Ms. Norris did, indeed, become a comma queen, learning from the strictest, the best and the downright eccentric at The New Yorker, where she’s worked for more than three decades—two of them in the copy editing department.

In a way, she became the grammar geeks’ grammar geek, the one with whom oft-revered others, including author John McPhee and professor of English and journalism Ben Yagoda acknowledge they’d happily confer.

Modest and, at times, disarmingly blunt, Norris distils wisdom, anecdotes, and plain “comma” sense in almost equal measure, often winding family stories and office politics into graphic illustrations of good grammar at work—particularly affecting and effective when it involves her transsexual brother’s deep distress over the pronoun with which she refers to him.

Her “lessons”, woven as they are from her wit and experience, are generally memorable but perhaps none more so than one on hyphenating compounds, illustrated by the memory of a letter to The New Yorker from a reader complaining about the term “star fucker.”

The reader wasn’t the least offended by seeing the term in print, only by its lack of what she called the “activating hyphen,” recalls Ms. Norris, who goes on to explain most matter-of-factly: “. . . without the hyphen, each word has equal weight: a fucker who is a star. But in ‘star-fucker’ the hyphen tips the weight to the first element, the object (star) of the activity embodied in the noun (fucking).”

Profanity has its own chapter in the book, by the way: “Whose delicate sensibilities are we catering to,” Ms. Norris asks.  “Certainly not mine—not anymore.”

And even though she agrees no one wants to be constantly pummelled by four-letter words: “If we are going to use them, let’s use them right.”

Tackling the niggliest of grammatical issues--from apostrophe catastrophes to the perils of possession—with a bit of history and autobiography thrown in, her sound knowledge is tempered always by a delicious sense of the ridiculous.

Take the semicolon, if you will. “What the fuck is a semicolon anyway,” she asks.

“No mark of punctuation is so upper-crust,” she reckons, adding that Americans can do without it “just as they can give Marmite a pass . . . We are a plainspoken, cheerfully vulgar people.”

Firm but open-minded when it comes to the subject she clearly adores, “I always forget that, in the popular imagination, the copy editor is a bit of a witch . . . ,” she says at one point, recalling the time a young editorial assistant, on hearing she was a copy editor, “jumped back as if I might poke her with a red-hot hyphen or force-feed her a pound of commas.”

And that’s simply not so.

In any case, as she points out, everybody makes mistakes: “Regularly, my grasp of the subjunctive slips, and I need to visit the grammatical equivalent of a chiropractor,” she says, deftly spinning the thought into a lesson on just how much easier than it looks the subjunctive really is.

Her witty take on the puzzles of punctuation—mostly dictated by the rules of The New Yorker, to which she is professionally bound—is, to use one of her own descriptions, a “big-ass” delight.

Her fondest wish, the author says, is that whoever looks at her book’s title will learn to say fearlessly “‘between you and me’ (not ‘I’), whether or not you actually buy the book and penetrate to the innards of the objective case.”