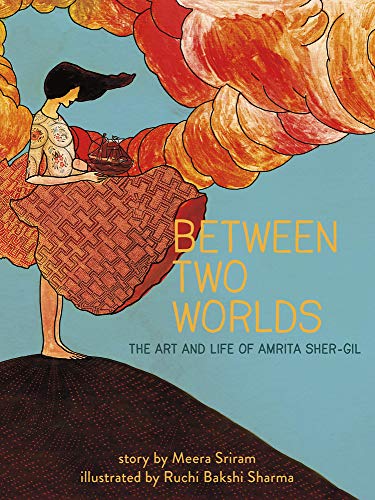 “The reader closes the covers more frustrated than enlightened.”

This picture book biography of a 20th century woman painter earnestly tries to tell the story of a conflicted talented artist, but there’s no real conflict in the book. Amrita’s parents support her studies, she’s allowed the freedom to explore art however she chooses. Her family “insisted she study art,” even taking her to Paris to provide her with a world-class artistic experience. This is not the story of a crazed unappreciated Van Gogh. So how to turn this life of coddled privilege into one of artistic brilliance?

The drama supposedly starts when Sriram writes: “But her world would soon change. Amrita would begin a lifelong search to find home, to find her own art.” This “search” supposedly drives the narrative forward, but the reader never feels part of it, never understands Amrita’s personality or intentions beyond the standard language for this kind of subject: “She rebelled. She drew on her own terms. She searched in her art for where she belonged.”

Do we see how she rebelled? What it meant to draw on her own terms? Such ideas are vague and are followed by more nebulous descriptions: “Unlike most children her age, twelve-year-old Amrita now painted women in unusual poses, with every detail of womanhood. Her art was as unashamed and fearless as herself.”

Again, what does that mean exactly? What unusual poses, what details? And here the illustrator, Ruchi Sharma, offers a page showing Amrita in the distance working on a blank canvas with a checkerboard hall dominating the image. Does that give a sense of her art? Of her intentions? Of her creativity?

The rest of the book is similarly frustrating. Amrita remains a stereotype of an artistic rebel with no sense of individual character. Her art and “struggles” to paint are never clearly shown. Her interactions with other artists (surely there were some in Paris) are never explored. The book ends by declaring that the search announced in the opening pages ended when “she discovered home in her own art—where her two worlds, East and West, intertwined.” Since those worlds haven’t been evoked, there’s no satisfaction in this closing. The reader closes the covers more frustrated than enlightened.

The entire text reads more like a magazine article than a picture book story, with no sense of setting scenes, of developing characters, of following the main character on a journey. None of the elements of successful picture book writing are here, though the intentions to do well by the subject clearly exist. But readers demand more than an interesting subject. Strong, vivid writing is a necessary ingredient, one this book sadly lacks.