Between Two Millstones, Book 2: Exile in America, 1978–1994 (The Center for Ethics and Culture Solzhenitsyn Series) 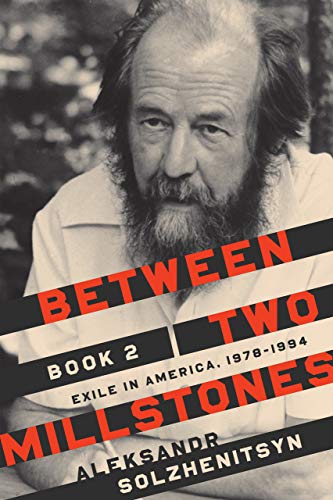 “Russia has never had a greater, more devoted patriot than Aleksandr Solzhenitsyn.”

In the second volume of Between Two Millstones, the great Soviet dissident, Russian patriot, and writer Aleksandr Solzhenitsyn (1918–2008) tells about his years of “exile” in America from 1978 to 1994. He spent those incredibly productive years at his home in Cavendish, Vermont, with his wife Alya and four sons. Most significantly, it was there that he completed The Red Wheel, one of the great works of historical fiction—a ten-volume dramatic history of the Russian Revolution of 1917.

Daniel Mahoney, in his insightful Foreword to Between Two Millstones, calls Solzhenitsyn’s writing of The Red Wheel “an almost superhuman effort to recover the truth about 1917 and Russia’s descent into the totalitarian quagmire.” Solzhenitsyn’s literary investigation of the tragic events of 1917 also informed his understanding of the dramatic events that led to the fall of the Soviet Union.

Solzhenitsyn felt that in writing The Red Wheel he was serving as “a bridge stretching from prerevolutionary Russia to the post-Soviet Russia of the future, a bridge over which the heavily-laden wagon train of History struggled to cross the entire abyss of the Soviet years so that its priceless load would not be lost to the Future.”

The author, of course, is best known for his three-volume exploration of the Soviet slave-labor camp system, The Gulag Archipelago. It was one of the most consequential books of the 20th century. It revealed to many the true nature of communism and, at least for a time, made communism unfashionable in Western literary and political circles.

Solzhenitsyn spent eight years in the gulag for telling a joke about Stalin. After the Khrushchev “thaw,” he was released from the camps and for a brief time period was able to publish works critical of Stalin inside the Soviet Union. All the while, however, he was at work on The Gulag Archipelago—which traced the origins of Soviet terror and the slave-labor camps to Lenin. The Gulag Archipelago was a bullet aimed at the heart of the Soviet system.

He managed to smuggle the book out of the Soviet Union, and when it was published in the West, Solzhenitsyn became a dangerous enemy of the Soviet regime. He previously wrote about that in The Oak and the Calf. He was charged with treason and expelled from the Soviet Union in 1974. This was at the height of the West’s policy of détente, so Solzhenitsyn was unwelcome to many in the West. The message he brought with him to America was even more unwelcome: he criticized détente, modernity, and Western countries’ turn away from God and traditional morality.

Nevertheless, Solzhenitsyn was happy in America, but he longed to go home to Russia—“historic” Russia, the nation that suffered under the Soviet yoke for more than 70 years. He found, however, that he had critics—indeed enemies—in both lands that viewed him as a threat to “democracy” and a dangerous Russian “nationalist.” This brave, courageous, and heroic man who spoke and wrote the truth to power at great risk to himself discovered that he was “between two millstones” in Russia and the West.

He traveled to the Far East in the early 1980s, including visits to Japan and Taiwan. In Taipei, he delivered a speech that was broadcast on radio alleging that the United States had “turned its back on Taiwan” by its détente with Communist China. Solzhenitsyn warned the United States that its engagement with Communist China was fraught with danger.

He had Russian émigré friends in the West, but also enemies, including Andre Sinyavsky and others who he settled scores with in this book. And the criticism he received in the West often mirrored that leveled against him in the Soviet Union. He even quarreled with his fellow dissident Andrei Sakharov, whom he admired—he was, indeed, between two millstones.

Solzhenitsyn is scathing in his criticism of Western media, especially the New York Times and the Washington Post. “In any corner of the Earth,” he wrote, “any degenerate reporter can write any lies whatsoever about me—this is what their sacred freedom consists of! Their sacred democracy!” At other places in the book he refers to the “irrepressible gutter press” and decries that the “free press is free of all restraints.”

He is also critical of Western writers, historians, and biographers, especially Michael Scammell whose 1000-page biography of Solzhenitsyn appeared in 1984. “The publication of the book,” Solzhenitsyn wrote, “left me with an acute feeling of having been much maligned, a bitter lesson in libel.” He described Scammell’s biography as containing “caustic patches of tawdriness, tactlessness, and ignoble interpretation.”

Many of his critics in the West accused him of being a monarchist, an unrepentant Russian nationalist, and an anti-Semite. The latter charge stemmed from his description in August 1914 (a volume of The Red Wheel) of the assassination of Russian Prime Minister Pyotr Stolypin by Dmitri Bogrov, a Russian Jew. The charge was unfair, but it was repeated again and again by critics in America and Russia.

He mostly praised the conservative voices in America, including Ronald Reagan, National Review, the journalist Richard Grenier, and Norman Podhoretz, the longtime editor of Commentary. It was conservatives—he used the term “right-wingers”—who better understood the evil nature of communism and had the courage to confront it. But Western conservatives, he believed, also misunderstood the greatness of “historic” Russia.

The fall of the Soviet Union, for Solzhenitsyn, was not an unmixed blessing, just as the fall of the Tsarist regime in 1917 did not ultimately benefit Russia. In The Red Wheel, Solzhenitsyn focused on the events of February, March and April 1917 which produced circumstances where “anyone could come along and seize power, and the Bolsheviks did.” He worried that the same thing was happening in Russia in 1989–1991.

Solzhenitsyn has little praise for Soviet leader Mikhail Gorbachev. Glasnost and perestroika were nothing more than the last futile attempt of a dying empire to save itself. What ultimately doomed the Bolshevik regime, he wrote, was “death from premature decrepitude because its earthly ‘religion’ did not have sufficient spiritual endurance; the pool of willing sacrifices for the sake of a ‘radiant future’ had run out and, resting on their laurels, both bosses and foreman had turned into pigs.”

When the Soviet Union collapsed, Solzhenitsyn faced the question of when to go home. The whole time he spent in America was in preparation for a return to his beloved Russia should the opportunity arise. He saw what was happening in Russia as a repeat of 1917. “In 1992,” he wrote, “the gigantic Russian Catastrophe began to unfurl: the nation’s life, morality, and social awareness unraveled, unstoppable; in culture and science rational activity ceased, school education and childcare descended into a fatal state of disorder.”

Solzhenitsyn’s books were finally being published in Russia. He had dedicated his life to “overcoming Bolshevism and now it had been dumped—and what was the result?” He feared that The Red Wheel was arriving there too late. “Gorbachev,” he wrote, “had unleashed . . . a new February [1917]. And [Boris] Yeltsin had set it rolling at full pelt, smashing everything in its way.” It was, he explained, a “Third Time of Troubles” in Russia’s history. He feared what he called “the rapidly changing moods of revolutions.”

And here we get to the essence of why Solzhenitsyn was caught “between two millstones.” His longing to return to “historic” Russia—the Russia of religious orthodoxy and traditional morality—went against the zeitgeist in both Russia and the West in the 1990s. Solzhenitsyn understood that communism and much of the world’s troubles stemmed fundamentally from the extreme secularism spawned by the French Revolution.

Solzhenitsyn concludes Between Two Millstones by recalling his farewell to his neighbors in Cavendish, Vermont. The Russian prosecutor’s office had informed him that the charge of treason had been dismissed. He was now free to return home to Russia. “Farewell, blessed Vermont,” he wrote. “[T]o stay here would rob my destiny of its thrust, its spirit.”

He was anxious to get involved in Russian events to help shape the future of his country. His goal was to educate his countrymen about Russia’s true interests based on a “profound analysis of the historical process.” They must learn, he wrote, that [t]he deep furrows that History has plowed across Russia are unswerving.” Russia has never had a greater, more devoted patriot than Aleksandr Solzhenitsyn.