Between Two Millstones, Book 1: Sketches of Exile, 1974–1978 (The Center for Ethics and Culture Solzhenitsyn Series) 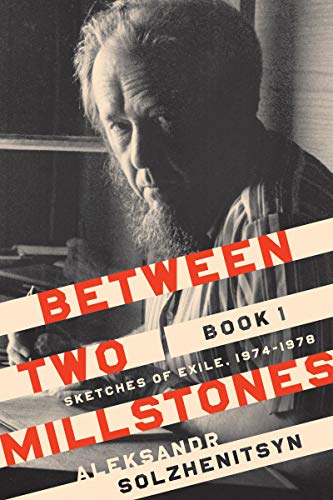 The publication in the West of Aleksandr Solzhenitsyn’s Gulag Archipelago and his subsequent exile from the Soviet Union occurred during the flowering of détente and America’s abandonment of its South Vietnamese ally in the Southeast Asian war. Solzhenitsyn soon learned that in addition to being a mortal threat to the Soviet communist regime, he would also be viewed and treated by some in the West as a dangerous reactionary and extreme Russian nationalist.

This situation placed him, in his words, “between two millstones,” which is the title of his memoirs of exile, the first book of which has just been published by the University of Notre Dame Press. Book One covers the years 1974 through 1978.

Solzhenitsyn’s tracing of Stalinist terror to Lenin directly challenged the legitimacy of the Soviet regime. Khrushchev in 1956 had denounced Stalin’s “excesses,” but criticism of Lenin could bring dire consequences to the critic. Lenin was still revered by many leftists in the West. The Gulag Archipelago finally revealed Lenin and Leninism as the inevitable precursor to Stalinism.

Between Two Millstones picks up the story of Solzhenitsyn’s remarkable and courageous literary and personal life where The Oak and the Calf and Invisible Allies, his two earlier memoirs, left off. It is a tale of the first stirrings of freedom in the West mixed with the fear of further Soviet retribution, the unceasing demands of celebrity, frustration with the Western elite’s commercialism, secularism, and legalism, and the personal desire to be left alone to complete his most important literary project, The Red Wheel.

The Red Wheel is Solzhenitsyn’s historical novel of the First World War, the collapse of Tsarist Russia, the Russian revolutions of 1917, and the Russian Civil War. It was the culmination of his life’s work; one of his two literary “cathedrals” (the other being The Gulag Archipelago).

Exile for Solzhenitsyn began in Zurich, Switzerland, where he resided for a few years before settling in the United States at a remote location in Cavendish, Vermont. In Zurich, he traced Lenin’s footsteps, including visiting Lenin’s old house on Spiegelgasse, which helped inform and illuminate his chapters on Lenin in The Red Wheel. “Wherever I wandered in Zurich,” he noted, “Lenin’s shadow hung over me.”

His manuscripts for The Red Wheel had to be smuggled out of the Soviet Union. This was done successfully with the help of friends—those “invisible allies” to whom he devoted an entire book.

During his research for The Red Wheel at the Hoover Institution on Stanford’s campus, Solzhenitsyn discovered that his views of the February 1917 Revolution in Russia had been wrong. “For forty years,” he wrote, “I had clung to the universally accepted view that Russia in February 1917 had achieved . . . freedom, . . . but, alas, only for eight months, as the Bolshevik fiends drowned that freedom in blood, steering the nation to ruin.”

“The fact that Russia was inescapably lost,” he continued, “was blatantly evident from the very first days of March.” The provisional government, Solzhenitsyn explained, let the Petrograd Soviet decide everything of importance. “From the very first days,” he further explained, “everything began to sink into the quicksand of anarchy . . .” “To think that I had succumbed to the beguiling pink clouds of those February mists,” he lamented. “How had I not seen that the die was cast not in October but in February?”

From the beginning of his exile, Solzhenitsyn clashed with the Western media and some Western intellectuals, who had supported him as a dissident in Russia, but who now wanted him to metamorphose into a liberal of the Enlightenment. For Solzhenitsyn, such a metamorphosis was impossible. He was a deeply religious and even mystical Russian patriot who opposed the luxurious complacency of the West’s liberal elite.

Moreover, when he ventured into the political realm in the West he refused to adhere to fashionable liberal positions. He criticized détente with the Soviet Union and America’s abandonment of South Vietnam to communism. He insisted that Russia and Russians were victims of communism and natural allies of the West.

After President Gerald Ford, on the advice of Secretary of State Henry Kissinger, refused to publicly meet with Solzhenitsyn, the author spoke before the AFL-CIO and warned the West to abandon détente and challenge communism throughout the world.

“To me it was clear,” he writes, “that Communism could not last forever. It was decaying from within, chronically ill, but on the outside seemed immensely powerful, marching forward with great strides.” What the West needed was to abandon timidity and face the Kremlin with “unrelenting toughness.”

Solzhenitsyn’s most fervid political supporters in the U.S. were Senators Jesse Helms and Henry M. Jackson, and former California Governor Ronald Reagan who would challenge President Ford for the Republican presidential nomination in 1976 in part because of the Ford-Kissinger policy of détente.

In his controversial Harvard commencement address in 1978 entitled “A World Split Apart,” Solzhenitsyn deplored the materialism and “irreligious humanism” of the Western elites, claiming that Enlightenment liberalism is what “led the Western intelligentsia to such strong and dogged sympathy for Communism.” He accused the Western media of a “uniformity of opinion” based on “the political fashion of the moment.”

The Harvard speech was roundly criticized by elite opinion, but praised by small-town America. This gave Solzhenitsyn hope, he wrote, that he could “connect with this America, warn it of what we had experienced, and perhaps even lead it to change direction.”

Solzhenitsyn also describes several legal battles he was forced to engage in regarding the publication rights and earnings of The Gulag Archipelago and other books. He admits that his imperfect understanding of the West’s culture and legal system led him to make many mistakes that distracted him from his literary work.

The book also includes some score settling with those within and outside Russia who sought to discredit him after he went into exile. In some cases, Solzhenitsyn insinuates that the KGB was behind those efforts.

He cherishes his communications with Russian emigres, especially those older emigres who fought against the Bolsheviks in the civil war. Their recollections added immensely to his portrait of Russia in The Red Wheel.

There are three more Books of Solzhenitsyn’s Between Two Millstones still to be translated into English and published. Notre Dame Press, which is also translating and publishing the remaining Nodes of The Red Wheel, is to be commended for continuing to enrich our understanding of the great Russian writer.

As this book makes abundantly clear, Solzhenitsyn was above all a Russian patriot and literary artist whose writings were intended to expose the truth of Soviet mendacity and, hopefully, help to revive Russia’s religious and cultural traditions within an evolving democratic process.