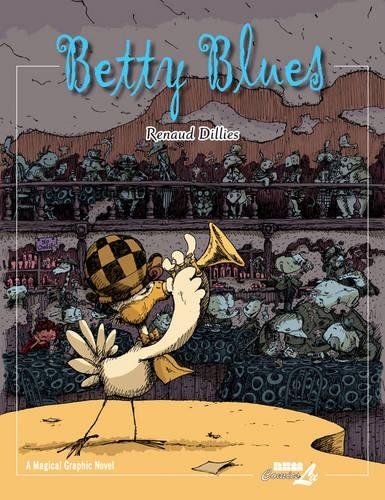 Initially released in 2003, it made Dillies’ presence known when Betty Blues snatched up the Best Debut award at the annual Angouleme Comics Festival. Translated from French, NBM has managed to retain the dark noir dialogue that plays so pitch perfect with lush shadowy scenes of smoke filled jazz clubs, fanciful penthouses, and moonlit rivers.

Little Rice Duck is a prominent jazz trumpeter who has lost his best girl, Betty, to a rich fat cat. Convinced that jazz and his musicianship have made his bird fly the coop, Little Rice pitches his trumpet in drink and leaves to find another way of life without Betty. Betty, meanwhile, is busy finding out how the other half lives and wonders if being arm candy and a cocktail party favor is enough for her. This is not going to be a tale with a happy ending, but what tales of jazz musicians ever have a happy ending?

While a melancholy tale perfect for overcast days with a little Bessie Smith or John Coltrane in the background, the artwork will be sure to lift your spirits. There is an expansive range of art styles in graphic novels, but unfortunately most titles published in the United States seem to maintain one of only a handful.

Dillies’ artwork is what may be considered “Euro-style.” There is an almost painterly quality to the illustrations, a reverence and love of the art. His use of shadows and odd visual angles give the world a sexy “underbelly of the city” vibe that is able to seamlessly move out to country where lies an underbelly rarely seen.

With anthropomorphized characters (fat cats are actual cats, Little Rice Duck is in fact a duck, and what a sweet little chickadee is Betty) we are at a remove to the story as it is harder to recognize oneself in the actions and words of such nonhuman characters.

But as the story goes on, we find recognition. Many are able to identify with the weariness gradually appearing on Betty’s face during another banal cocktail conversation. Some may even recognize the reluctance to let go of an idealized image of a lover. Most will recognize the pain of regret.

Europe has not looked down their collective noses at graphic novel, as Americans have done until relatively recently, and it has embraced their artists in a way that is totally foreign to Americans.

Hopefully, more publishers will see the value of expanding their styles and allow a bit more freedom for their artists. Until then, we have publishers like NBM hunting down these treasures on our behalf.