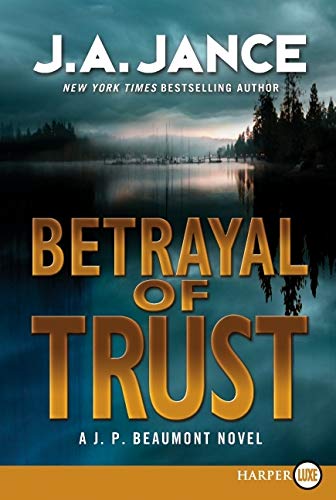 “Although a police procedural, Betrayal of Trust never plods along.”

Betrayal is the word used when someone you trust wrongs you. It implies that the act is not just a mistake or a business decision, but deeply personal. Who has the ability to hurt you that deeply: those charged with taking care of you, family.

This book is about families and how wrongheaded they can be, both consciously and unconsciously. The main story is about tormenting a boy; it’s called cyber bullying, but that term fails to plumb the depth of this monstrous behavior.

Josh Deeson has had a bad start. When his mother died of an overdose, his grandfather took him in. The grandfather is now married to the governor of Washington. But surprise, surprise, Josh doesn’t fit in. When the governor punishes Josh for sneaking out at night, and confiscates all his electronic devices, she finds a snuff film on his cell phone, a girl being choked to death. Josh swears he doesn’t know the girl or why this is on his phone.

The governor calls on her old high school acquaintance, J. P. Beaumont. He brings his partner in life and work Mel Soames, as they are both on the Special Homicide Investigative Team. The joke that its acronym is S.H.I.T gets old fast.

Beaumont remembers the governor as one of those snooty, stuck-up, perfect teeth, perfect hair girls. He empathizes with Josh; he was Josh in high school. Poor, single mom, dead dad, homemade clothes—nonetheless that doesn’t mean Josh is telling the truth.

Josh may be close in age to the governor’s two teen girls, but that’s all he has in common with them. They go to Olympia Prep. He, because of his spotty education, goes to the public school. He’s a chess club nerd; they are golden girls. After the bullying is discovered, the grandfather realizes he could have done more for his grandson. But Josh has been there for four years. When exactly is someone, anyone going to help him?

J. P. has his own family issues: He was an alcoholic most of the time his daughters were growing up, and so he’s not throwing stones. He’s learned a lot since then, one of the most important being trust. In the middle of this case J. P. gets an email from someone claiming to be a long-lost cousin. Is this a shakedown or the first real part of his past?

Although a police procedural, Betrayal of Trust never plods along. Detectives interview suspects, wait for warrants, and go through the garbage for evidence. The lesser characters are wonderfully drawn, and just when you think an individual is going to fit a clichéd stereotype, author Jance steers in another direction. The dead girl’s mother was arrested for meth, so readers may assume loser, but she seems to have put her life together. The bikers at the bar she works at are just as concerned for her as the friends of the governor are for her. The small details--when J. P. has to climb stairs his knees hurt, Mel gets hit on by a creepy medical examiner—are all well done.

There is some DNA evidence left hanging at the conclusion—and that’s unsatisfying. Don’t raise a plot point then fail to wrap it up. Death is no excuse. It also seems like piling on unnecessary extras: The case is well drawn without it.

One other small issue: Because this detective squad covers Washington State, a map of the area would have been helpful.