The Betrayal of the American Dream 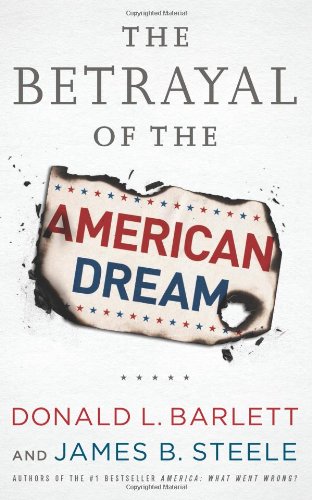 There is something about books in the genre of political activism that stirs the deepest part of our beings. It does not matter if it comes from the extreme right or far left or from a more moderate position, some of us feel compelled to read them. Donald Barlett and James Steele’s newest entry, The Betrayal of the American Dream, is one of those must-read books.

The authors’ first political rant, America: What Went Wrong (1992), gives the reader a good idea of what to expect. But a lot has changed in the last 20 years, so Betrayal adds a new element to Mssrs. Barlett and Steele’s other writings: Occupy Wall Street (OWS) and the battle against the One Percenters.

Okay, you will only find a single mention of the OWS movement in the index, but it is quite evident from the first words in the prologue that this issue is the authors’ newfound obsession.

“The economic elite have accomplished (the destruction of the middle class) by relentlessly pressing their advantage, an advantage that exists for the simplest reasons: The rich buy influence . . . the message has been driven home to the middle class that politics had become slavishly addicted to the big bucks of the moneyed class . . .”

If you are not from the more Libertarian bent of liberal politics, Betrayal will seem more like the group megaphone of the OWS’s call and reply message than an informative text, so much so that each time the authors began a new chapter one expects the session to start with “Sound Check!” repeated like automatons by the masses.

As in most other political pundit books (certainly not all), there is some good information within these pages—once the reader gets past the general hype or hyperness of the writing. Betrayal provides a lot of anecdotal examples of the damage accomplished by corporations seeking only profits thus furthering the country’s backslide from the American Dream, how factories have been closed and jobs shipped overseas—all this closely followed by some prognostication on what is to come.

There are chapters concerning the evils of the North American Free Trade Agreement (NAFTA), the tax codes favoring those with the money rather than those doing the work, and the loss of that dream of comfortable retirement because of the 2008 banking and housing debacles.

What makes The Betrayal of the American Dream important is the research authors Barlett and Steele have done to justify their positions and conclusions. Even the relatively short discussion of those devils incarnate, the neo-conservative Koch brothers, provides enough evidence from solid sources to support the message: These guys and their politics are bad for the middle class.

By 2009, in the throes of the worldwide economic disaster and because of people like the Kochs, one half of American household incomes fell below the numerical designation of “middle class,” greatly increasing the number of Americans living in poverty.

One major positive here; the authors stayed out of the current political fray. Betrayal does not speak to the 2012 presidential election cycle nor take on the presumptive Republican presidential candidate Mitt Romney and Bain Capital. They do address one of the largest venture capital firms, Blackstone Group, in hopes of showing what these firms do for a living: Buy companies, liquidate them, send the jobs overseas, and reap the profits.

This last statement is not entirely correct, but it’s close to what the Liberal-Libertarians would proffer.

Yet the authors do one thing so much better than many others:

In management communication programs, participants are advised that when an employee comes in with a complaint, ask that employee how to fix the problem. That is exactly what Mr. Barlett and Mr. Steele attempt to do in their final chapter. Unfortunately, this approach yields the same rhetoric that we get from the OWS, Libertarians, and Democratic Party: Tax the rich, reward those who create jobs in the U.S. instead of shipping them overseas, make all products “Free Trade” and “Fair Trade.”

Disappointingly, there was no discussion on the success or failure of the Obama economic plan(s) or of Ronald Reagan’s “trickle down economy” theory.

This is not the right book for the few souls educated enough to discuss the differences and commonalities of Voltaire’s, Keynes’, and Ayn Rand’s philosophies concerning government and economics.

But it is a fast paced and enjoyable trip down the left side of the “Don’t Tread on Me” highway, providing an understanding of where the road began and where it appears to be going. For those willing to travel, hold on for the ride.