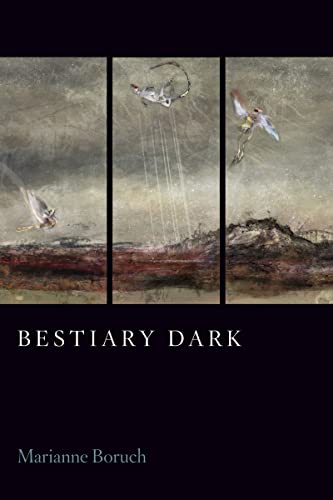 In her 11th poetry collection, Bestiary Dark, Marianne Boruch goes back to Pliny the Elder, who asked, “The world, is it finite?” The answer is both no and yes. The world contains far more variety, even only of living things, than first-century Roman Pliny could have conceived. Yet from a 21st century point of view, the world is profoundly finite: short of resources, short of space, deeply known, and still terrifying.

Boruch uses Pliny as a frame for her collection. Between her Prologue and the poems themselves lie the “Contents, in the Manner of Pliny the Elder.” Each “book” carries Roman numerals and wide-ranging headings: “As cockatoos shriek, John the Bird whisperer knows things. Of an Australian raven we almost reported to Child Protection, its mourn and scream so resembled/.” These aren’t the titles of poems. Rather, they correspond to themes within the text, so that the untitled poems speak back to this early, enumerated poetic list as a kind of progress of knowledge not easily conveyed through linear script.

Beyond Pliny’s frame, though, lies an entire continent unknown to the Classical world: Australia. Australian animals defy Pliny, refusing categories and existing beyond his inventory of the known. The Australian landscape, as it did in the summer of 2019–20, is on fire, changing the world’s boundaries. Boruch’s persona protests the erasure: “You think this world doesn’t know things? I asked the fires / from a distance. Did you think you can / do any damn thing you want?”

The book’s problem is one that Boruch confronts early. Pliny’s mode of knowing is a fundamentally European one, and it doesn’t “work” in Australia. Her family travels in American wonder: “nearly off the map! our son wrote, / half mistaken-amazed as old cartographers in globe / with vast, with a lot of water / around something.” But those cartographers, enchanting as they are, belong to the same mode as Pliny. The poem thinks it can see the problem: “I understand, I said to the Indigenous Elder. / No you don’t, he said.”

And here lies the problem. Boruch is writing as a visitor to Australia, essentially a tourist. Her journal echoes Australia’s colonial history, bringing frameworks of knowledge and power to a place that resists them. The Australian landscape and its animals don’t fit with Western knowledge. Boruch uses this as a path to revelation, manifested by the recurrent archangel, but avoids the problem that the archangel, by its nature, is also a colonial presence. Pliny the Elder is an invader; the Indigenous Elder barely manages to add words to the page as he’s edged out of view.

There are exquisite moments of parallel in this collection. Pliny the Elder died in the fires of the volcano that destroyed Pompeii, trapped by “all these shoulds, / like that great bushfire in Canberra years ago / should have taken out every huge eucalyptus.” But the Indigenous presence, the other “Elder,” is repeatedly buried under the rush to make poetry. The poetry itself is glorious, beautifully written, but it’s blithely unconcerned with its own problematic existence.

By failing to give space, Boruch replicates the process of colonization, reducing Australia again to landscape (dry, alien, on fire) and animals (lovely, exotic, burned). When the Indigenous Elder appears, it’s as a refusal of knowledge: “his / brilliant insistence who was, who wasn’t / in the Dreamtime, not that it’s / getting handed on, he said half to himself. / (Not to me, such secrets, of course. No way.)” The resentment of that last line is striking: how dare he not share? This is a persona that demands access to all knowledge, all terrain. She is the Settler incarnate, even as a tourist: all must be available, all must be given over, or that which is not shared must not be important.

Bestiary Dark is a book that’s simultaneously a glorious poetry collection and a cognitive failure. It’s beautifully done, and it totally ignores the history of Australia, the process, violence, and ongoing inequities of colonialism. If that doesn’t bother readers, it should. Pliny’s misunderstandings of the world, his insistence on being the center of knowledge, are the gestures of empire. Other modes are possible, but maybe not for this poet, in this place, in this mindset. The result is ungenerous, even resentful, self-important in ways that replicate Pliny’s blithe ignorance and the Australian fires: absurd and destructive, though charming when taken in a charmed space free from politics or history.