The Best of Iggy 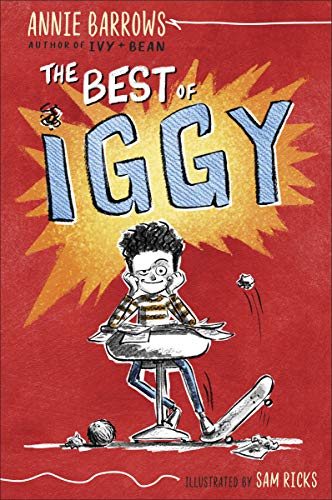 With this slim chapter-book tale of a well-intentioned troublemaker, Annie Barrows (of Ivy and Bean fame) and illustrator Sam Ricks have hit a solid homerun. The text and whimsical black-and-white drawings complement each other perfectly. And the narration is often laugh-out-loud funny. Barrows establishes a fun, playful tone right from the start:

“This is a book about a boy named Iggy. (You probably want to know why he was named Iggy, but I’m talking about something else right now.)”

As the tale unfolds, our wisecracking narrator quickly lays out the Three Types of Things We Wish We Hadn’t Done, which establishes a loose framework for Iggy’s misadventures. They are:

2. Things we wish we hadn’t done quite as much as we did.

Naturally, throughout the course of the story, Iggy progresses from Thing One to Thing Three, landing in deeper and deeper trouble with his teacher and parents, despite his best intentions. A middle child with poor impulse control, Iggy often lets his pride make a promise he can’t fulfill—a character trait many young readers will find familiar.

For example, when he’s forced to hang out with “perfect” Jeremy Greerson because their mothers are friends, Iggy’s behavior at their brunch gets him sent outside. There he sulks, bouncing his skateboard on the trampoline and singing a song about pee. Jeremy finds him there:

“I’d get killed if I said that,” said Jeremy. (This was not true. Jeremy might get a Talking-To, possible a Reflection Time, maybe a Natural Consequence, but none of those was even close to being killed.) . . . .

There was a silence, “What’re you doing?” he asked.

Iggy did not want to say “I’m bouncing on my skateboard on the trampoline.” That sounded stupid. Babyish. Pathetic. Instead, he said, “I’m pushing the trampoline next to the shed so I can skateboard off the roof and land on it.”

It takes no stretch of the imagination to picture how wrong things go after that. When Jeremy falls (thanks to Iggy), the narrator hastens to reassure the reader:

I hate that book. I would never write a book like that.”

And although Iggy gets himself into deeper and deeper trouble as the story progresses, nothing truly awful happens. Young readers will love Iggy’s motto, “It seemed like a good idea at the time,” and hungrily await the next installment in this delightful illustrated series.