The Best of Archy and Mehitabel 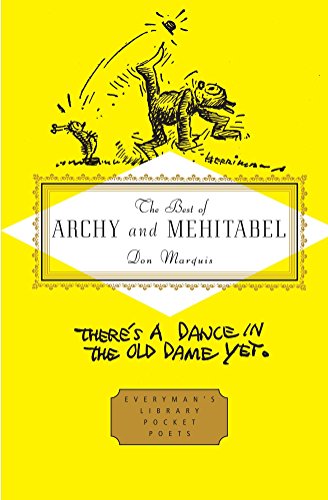 “To read these comic poems in blank verse again is to live childhood again, when the surly, often irate insect was first discovered. But what was on the surface a children’s work—a story of cat and roach, complete with line drawings—turned out to be so much more. For The Best of Archy and Mehitabel is a book that grows with the reader, something that the Harry Potter books, for all their magic, cannot do. If it does not grow in size—indeed, the new edition fits nicely in hand or pocket—it grows in meaning.”

In that the world is noticeably going to hell in a handcart, many readers today are seeking refuge in works from the past, in tales in which Mr. Darcy turns out to be all right after all and Pip grows up at least to make his peace with Estella—even if he never truly understands what’s been eating her for all those years.

Now Everyman’s Library—that series of beautifully bound, ribbon bookmarked, little hardbacks with great, great words inside—helps us to forget our underwater mortgage, our shrinking retirement accounts, and the death panels that cannot wait to get their grubby hands on us by taking us back, every so fondly, to a time in which bums were bums and alley cats were the reincarnation of Cleopatra—or so they claimed.

With the publication of The Best of Archy and Mehitabel, Everyman’s Library honors one of our nation’s best and most undersung authors, Don Marquis. While the man was at the top of the game in the 1920s and ’30s, he has never achieved that highest level of respect that he deserved. Classic New Yorker wits James Thurber and Dorothy Parker were both said to be fans of Mr. Marquis’ work, and yet they both eclipsed him the in public imagination.

But the man was not without his fans. No less than E. B. White volunteered to write the introduction for the first collection of Archy and Mehitabel works, collected in 1950. That introduction is repeated here, in the Everyman’s Library Best of:

“Among books of humor by American authors, there are only a handful that rest solidly on the shelf. This book about Archy and Mehitabel, hammered out at such awful cost by the bug hurling himself at the keys, is one of those books. If is funny, it is wise, it is tender, and it is tough. The sales do not astound me; only the author astounds me, for I know (or think I do) at what cost Don Marquis produced these gaudy and irreverent tales. He was the sort of poet who does not create easily; he was left unsatisfied and gloomy by what he produced; day and night he felt the juices squeezed out of him by the merciless demands of daily newspaper work; he was never quite certified by intellectuals and serious critics of belles lettres. He ended in an exhausted condition—his money gone, his strength gone. Describing the coming of Archy in the Sun Dial column of the New York Sun one afternoon in 1916, he wrote: ‘After about an hour of this frightfully difficult literary labor he fell to the floor exhausted, and we saw him creep feebly into a nest of poems which are always there in profusion.’ In that sentence Don Marquis was writing his own obituary notice. After about a lifetime of frightfully difficult literary labor keeping newspapers supplied with copy, he fell exhausted.”

It is, perhaps, lazy of the reader to let E. B. White do all the work in giving the background of Don Marquis’ best creations, Archy and Mehitabel. But he does it so well, most especially when he writes: “It is funny, it is wise, it is tender, and it is tough.” Here, White left out the best part, the fact that some of the verses manage the miracle and are funnywisetendertough, all at once.

To read these comic poems in blank verse again is to live childhood again, when the surly, often irate insect was first discovered. But what was on the surface a children’s work—a story of cat and roach, complete with line drawings—turned out to be so much more. For The Best of Archy and Mehitabel is a book that grows with the reader, something that the Harry Potter books, for all their magic, cannot do. If it does not grow in size—indeed, the new edition fits nicely in hand or pocket—it grows in meaning.

And perhaps not since the Great Depression have the meanings of these poems resonated so deeply with our day-to-day lives. The poem “Statesman” is a chief example of this, a tale in which archy is advised that, if his city life is just too hard, then he should

Archy ponders and then questions this solution:

Perhaps too much as been said so far about Archy and not enough about sweet Mehitabel, student of Madame Blavatsky, and believer that she is the possessor of the transmigrated soul of Cleopatra, Queen of the Nile. Where archy serves as typist, narrator and political and social conscience of this collection, Mehitabel serves as its heart and the source of its humor.

In her time, Mehitabel faces multiple broken down tomcat husbands, the drowning of litters of kittens, and a life spent picking through the trash cans in the winter chilled alleyways of Manhattan.

“The Song of Mehitabel” has long been considered the best of the bunch, as it not only allows for Mehitabel for the first time to speak for herself and not simply be reported on, but also because it introduces the reader to what would become famous as Mehitabel’s refrain: “There’s a dance in the old dame yet,” a commentary that manages that best thing that humor can bring—the funny/sad combination.

It is said that Don Marquis worked hurriedly to finish his column in order to join his fellow journalists at the bar across the street. To this end, he soon learned that writing Archy and Mehitabel had the added benefit of filling the page quickly, as many lines contained only two or three words.