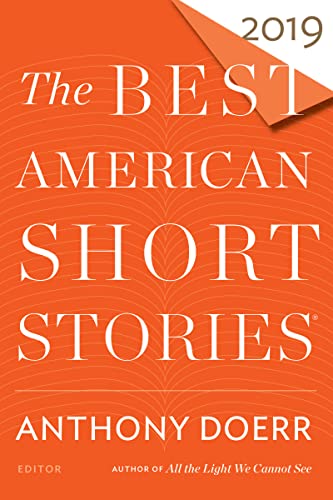 The Best American Short Stories anthology has been published yearly and without interruption since 1915. It is the book every emerging writer reads cover to cover, its back-of-the-book list of literary journals, the one that determines where thousands of writers will send their stories each year in their quest to find a worthy home for their literary efforts.

(In case you’re interested in the process, it is this: Since 1978, a series editor narrows a field of thousands to 120 stories, a selection that a renowned guest editor then narrows further in order to find the best 20 for inclusion in the anthology.)

Here are the first few lines of “Pity and Shame” by Ursula K. Le Guin:

“At first Mr. Cowper just lay there like a heap of bedclothes, laundry for the wash. His face was so blank it was like it was erased off a slate. Doc Mac said he was concussed and he’d probably get over it and probably survive, awful as his injuries looked. Mostly there was nothing to do for him but get him to drink water or beef broth when he’d take it, and use the bedpan.”

And while, through the years, critics have had this or that to say about the heart or focus of a particular guest editor’s idiosyncratic selections—mostly, one might suspect, because guest editors have succeeded by the time they edit and are not afraid of making controversial choices. And yet, the quality of the writing is never in dispute.

“The soldier opens the car door, leaps out, and flees into the hills. What Mr. Badii is asking amounts to being an accomplice to a crime, since suicide is forbidden in the Quran. The camera gazes after the soldier as he grows smaller and smaller until he disappears altogether into the landscape, then it returns to Ershadi’s extraordinary face, a face that remains almost completely expressionless throughout the film, and yet manages to convey a gravity and a depth of feeling that could never come from acting—that can come only from an intimate knowledge of what it is to be pushed to the brink of hopelessness.”

This year, longtime BASS series editor Heidi Pitlor worked with guest editor Anthony Doerr, whose book All the Light We Cannot See won the Pulitzer Prize, was a New York Times Book Review Top Ten Book, a National Book Award finalist, and was on the New York Times bestseller list for over two and a half years.

In her foreword, Pitlor says, “Lately I am drawn to bold stories, stories that without any equivocation go somewhere. Sentences that set something simple and clear on the table. To be bold in one’s writing right now seems to me and act of tremendous courage.”

In his introduction, Doerr gives his own take on what he thinks all his selections have in common:

“All winter, questions about the truth and who gets to control it rippled through my thoughts. The stories we chose for this volume don’t all focus on these questions, and they don’t all violate the so-called rules to the same degree, but they do each stray far enough from the familiar to feel new and strange and true. They’re about people severed from their places or their histories, about girls being told they ‘weren’t worth much, not as much as sons’ (Trahan, ‘They Told Us Not to Say This’), about an overdependence on pharmaceutical solutions to unhappiness, and about the insidious ways racism and classism can silence voices and distort memory. They are provocative, weird, dazzling, dark, bright, serious, and hilarious, and as a group they demonstrate the incredible possibilities implicit in the form.”

Which is to say they are, each in their own way, unabashedly political, aware of their context, of the times we live, and understand their role in this particular time and age, as one of resistance. Here, for example, is “Black Corfu” by Karen Russell:

“‘A face like yours must irritate your parents, eh?’ the doctor offers mildly. Despite the Italian ancestry the boy claims, his complexion will always raise suspicions. Who can account for the colors wreathing out of the buried past, and where and when they meet resurface? Jure da Mosto looks no older than 16, and already with the stink of some precocious failure on him. The doctor thinks: It would be a joy to be wrong about even one of them.”

Here is Wendell Berry with “The Great Interruption: The Story of a Famous Story of Old Port William and How It Ceased to Be Told (1935–1978)”:

“One mind, and a boy’s mind at that, finally could not contain such a story. But such a story, a story of such high excellence and so rare, could be turned loose in Port William only with some caution beforehand, as one might release an especially exuberant big dog. Billy found that he was not able to tell the story to anybody unworthy of it, which eliminated forthwith all the boys more or less of his own generation.”