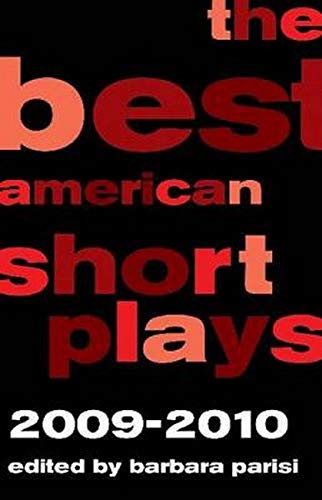 “The nine short works are not all theater masterworks, but they are a fair representation of the spectrum of styles and subjects being examined by contemporary playwrights.”

This latest volume in a series that has been around for an unbroken string of seven decades should serve as an answer to those who bemoan the death of American theater.

The playwrights are present and certainly accounted for. If the book represents what is incubating in American theater today, we all have a reason to smile. Not every piece in the book is a gold coin, but there are many real treasures to be had.

Theater scholar and teacher Barbara Parisi, now in her fifth stint as editor, has kept the series’ torch burning with this 2009–2010 edition. She has gathered playwrights you’ve heard of and playwrights you will hear of.

The stated aim of the series is to find a representative grouping of the best new one-act plays by both established playwrights and newcomers. Some of the authors whose plays were published in previous editions of the series went on to become well known for their theatrical works. The 2009–2010 edition of The Best American Short Plays focuses on the theme of “subtext” Ms. Parisi tells us. Subtext is the interaction between characters that is not in the spoken lines. Subtext is the means the playwright uses to create a sense of reality.

Playwright and filmmaker Neil LaBute, whose work has appeared in past editions of the series and who is represented by a short work in the current volume, wrote a preface for the book. Size, he concludes, does and doesn’t matter. Short plays are rewarding to write, and a constructive challenge to the writer, he points out; however, he makes it clear that he sees them as a shared pleasure for the playwright and his audience, and not a source of income to the working playwright.

“The only thing smaller than the plays themselves is the profits you see from a night of one-acts at a local theater. The freedom to explore, however, is priceless.”

The plays cover a wide range of topics. Trash Bag Tourist by Samuel Brett Williams delves into the feelings of hopelessness and helplessness of victims of the Katrina disaster in New Orleans. Chuck, one of the “trash bag tourists” who carry their few remaining possessions in a plastic bag, is displaced by the floods and forced to accept the charity of strangers. The playwright examines the nature of that charity as Chuck watches it wear thin and run out.

The Date, by Joan Lipkin, holds a magnifying glass to an encounter between two gay men. Their first date could be the beginning or the end of their relationship. Lipkin explains that she wrote the short piece as part of a longer project on the subject of the AIDS epidemic.

One of the strongest plays in the collection, and probably one of the most traditional, is Adam Rapp’s Red Light Winter. Rapp uses the sexual meeting between American college buddies and a prostitute from Amsterdam’s famed Red Light District to examine the relationship between love, sex, and loneliness.

The nine short works are not all theater masterworks, but they are a fair representation of the spectrum of styles and subjects being examined by contemporary playwrights.

Martin A. David is an author, dancer, choreographer, and former frequent reviewer for such publications as the Los Angeles Times. He is also an actor and playwright as well as the author of a number of absurdist plays.