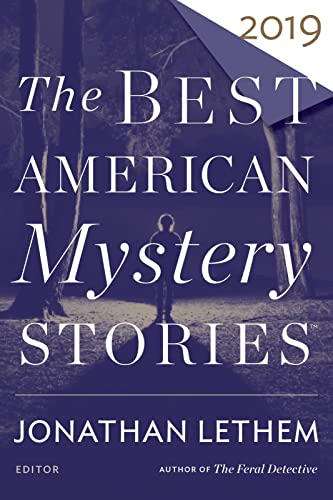 Anthologies are a lot of fun. They enable reading in short bursts, they provide access to authors not normally seen on the racks at the checkout counter, and they help us get up to speed on the latest in whatever genre happens to be in the spotlight.

This year, series editor Otto Penzler has chosen Jonathan Lethem to edit The Best American Mystery Stories 2019. Penzler has brought in a fine roster of guest editors throughout the years, including Robert B. Parker in the series debut (1997), Donald E. Westlake (2000), Scott Turow (2006), and last year, Louise Penny.

The process followed to select the stories for each edition is rather daunting. Penzler explains in his Foreword that specialty magazines such as Ellery Queen Mystery magazine and Alfred Hitchcock Mystery magazine are scoured for contenders along with literary journals, consumer magazines, and other anthologies published in the target year. From several thousand possibilities, 50 are selected by Penzler and sent to the guest editor, who chooses 20 for publication.

As well as casting a wide net among already published mystery stories, Penzler willingly explores the many subgenres that have broadened the scope of the genre in recent years. While his working definition of a story appropriate for his series is “any work of fiction in which a crime, or the threat of a crime, is central to the theme or the plot,” he notes that romantic suspense, espionage, and medical thrillers (as well as science fiction, as we see in this case) also provide grist for the mill.

Jonathan Lethem, meanwhile, devotes his Introduction to a reminiscence of well-known crime fiction author Stanley Ellin, who was noted for his craftsmanship in the short story form. Last year, guest editor Louise Penny similarly mentioned her love of Arthur Conan Doyle and Alice Munro, but she also went on to say a few brief words about her selections. Lethem, unfortunately, remains silent in that regard.

As a result, it’s up to us, as it should be, to assess his choices and render judgment ourselves regarding their validity. Are these actually, really, truly, the best mystery stories published in 2018?

As is often the case, the roster is a little hit-and-miss. Robert Hinderliter’s “Coach O,” a football story that definitely tests the elasticity of the mystery genre, is perhaps not the best choice to open the volume. Mark Mayer’s “The Clown” brings a few good moments of suspense, but the story is too elongated and could have been effectively compressed to half its size. Harley Jane Kozak’s “The Walk-In” is overwritten and also too long. Ted White’s “Burning Down the House” probably would have felt more at home in a science fiction anthology.

On the other hand, Arthur Klepchukov’s “A Damn Fine Town,” the story of a defrocked cop reduced to scouting out mugging victims on the airport train, is an excellent piece of suspense that explores the idea of “traveling without traveling” and presents an interesting character study.

Preston Lang’s contribution has the unwieldy title “Top Ten Vacation Selfies of YouTube Stars,” but the tale beneath it is a very good one, as a down-and-out journalist ponders an offer to become a hit man.

Similarly, Robb T. White provides an engaging story of an aging ex-con who plans an executes a robbery with an unreliable accomplice in “The Inside Man;” and Jared Lipov’s “Mastermind” is an excellent study of two boys who think they’ve found a fugitive from the law holed up in a building across the street from their school.

The bell ringer for this year’s collection, though, the one that wins “Best in Show” and is worth the price of admission alone, is “A Box of Hope” by Brian Panowich. Self-described as a fire fighter who writes stories, Panowich has made his mark as the author of Bull Mountain and Like Lions, crime novels set in rural Georgia that have raised his profile as one of the best up-and-coming authors in the genre.

“A Box of Hope” is the kind of story that jumps off the page and smacks you across the chops. While the idea itself is not new to literature, revolving around the struggles of a boy to get through the reception after his father’s funeral, Panowich’s treatment of it is outstanding. He’s a careful writer, conscious of craftsmanship, using the short story form effectively to build the relationship between Will and his estranged Uncle Jack while steadily developing suspense until the true nature of the situation is revealed at the end.

A perfect short story. One that you’ll find yourself thinking about again and again, long after you’ve read it.

In all, The Best American Mystery Stories 2019 is a very good way to acquaint yourself with a selection of writers who deserve our attention and praise. Thanks to Otto Penzler and Jonathan Lethem, we have contributions from Arthur Klepchukov, Preston Lang, Robb T. White, and Jared Lipov that will encourage us to get out there and discover what else they’ve written.

And as for Brian Panowich, well, if you haven’t read his work before now, you’ve got some homework to catch up on.