The Best Party of Our Lives: Stories of Gay Weddings and True Love to Inspire Us All 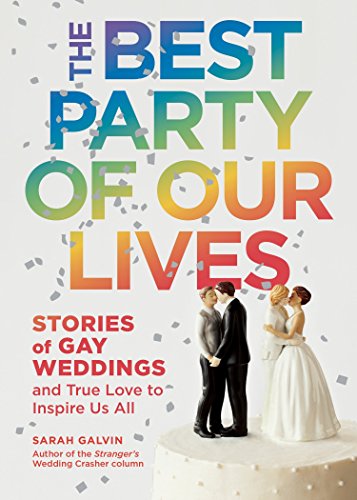 This happy little stocking-filler is based on Sarah Galvin’s writing a column called "Wedding Crasher" for The Stranger newspaper in Seattle. In principle "Wedding Crasher" covered any kind of wedding “but because of its intentionally celebratory timing following the approval of Referendum 74 (which made same-sex marriage legal in Washington)” and the newspaper’s history of gay rights advocacy, more than half the weddings Galvin attended were same-sex. This book then consists of 23 short essays: Stories of Gay Weddings and True Love to inspire Us All detailing how twenty-three same-sex couples found love and marriage. These essays are bracketed by Ms Galvin’s Introduction and Afterword.

It is tempting to say—with a nod to Leo Tolstoy—that all happy couples are the same, and though diverse in age and background (though not apparently ethnicity) these couples seem to have experienced relatively few obstacles in terms of their acceptance by well-adjusted families, workmates, and communities. The major obstacles encountered come from bureaucratic or administrative sources; one judge officiating at a marriage realizes that a notary is needed and both trans-individuals experience problems in being mis-registered.

As this material is currently presented it is probably of most interest to those 23 couples featured, though others wanting to follow in their footsteps will also find it inspiring.

The general reader will struggle through the details of food, wedding attire, boutonnieres, etc. but those who make it to Galvin’s brief though thoughtful Afterword will perhaps hope that she will write a different kind of book on the basis of her extensive knowledge of same-sex unions, putting this phenomenon in a broader context and demonstrating  even more clearly the irrelevance of the binary categories of sex and gender in which we are all usually imprisoned.