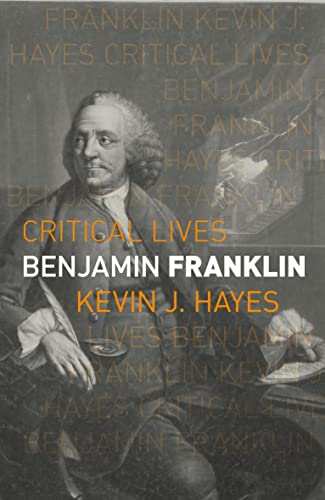 “Benjamin Franklin casts a long shadow.” How does someone write a short work on such a complex, monumental, and popular figure, especially with so much has already appeared in print?  In the case of Franklin, how would even as an accomplished scholar as Kevin J. Hayes publish after such prose and scholarship as Walter Isaacson’s epic work on Benjamin Franklin?

The author begins by humanizing this American through Franklin’s autobiography, his famous humor in Poor Richard’s Almanac, and his now less appreciated The Way to Wealth. The latter, a popular pamphlet in its time, “conditioned how people perceived Franklin’s life.”

“Franklin was a funny guy.” Editors of the ten volumes of Franklin’s writing, however, chose to strip out much of the humor in his letters as bawdy and undignified. His prominence thus came to silence the funny tales that became his personae.

Throughout this solid but short work, Hayes argues that stories, even when likely not true, completed the image of one of the fullest lived ever lived. This book goes in many directions including as lessons in understanding American through its sometimes false memory of Franklin’s humor. In some ways, the stories give the reader more of the real man than excuses given by some overzealous biographers.

Seemingly everything published on Franklin became classic American literature and fair game for analysis and criticism. Hayes quotes from Mark Twain, the other great wit, who loved Franklin as “a playful homage by a fellow journalist, printer, humorist, and maxim-monger.”

Other reviewers cited include Michael Chevalier, Lord Byron, Honoré de Balzac, and D. H. Lawrence. To many of these writers, Franklin “united the labourer’s persistence, the philosopher’s sagacity, and the scientist’s patience.”

Of “the ability of Americans to shapeshift, to remake themselves anew,” “few symbolize this impulse more than Benjamin Franklin.” In his brother’s print shop, he learned to write convincingly as a number of different characters, a means of learning different perspectives.

Franklin even changed personae depending upon whom he addressed in his private correspondence! He learned how to use writing not just as a means of communication but as a tool for understanding the facts and ideas that he read, of even seeing something of the universe as a whole.

Little wonder that the scholars viewing Franklin since have read so much into his writings. They would see their ideas about work and such bright futures as industry and government would combine to efficiently end poverty. Mary Shelley reportedly even named her famous scientist who tries harness lightning to overcome nature after Benjamin Franklin!

Most of this short book, however, is not about Franklin’s humor but a study of how he became whom he became. Benjamin Franklin provides the reader with a solid chronology of Franklin’s life that makes for a good read in a relatively few pages.

Hays offers the origins of Franklin’s intellect but also how Franklin grew from his experiences and so gained courage and self-confidence. The reader learns of Franklin’s struggles to become a printer, how he came to organize Philadelphia’s civic improvements, his self-taught interest in science, his career in the war with France and the Indians, and so much more.

As Hays emphasizes the events that shaped Franklin, he also challenges popular misunderstandings about this “First American.” Franklin, for example, never reached Harvard but he had enough formal education to prepare him to become all that he would be celebrated for. The Benjamin Franklin of legend and life really came into being during his first time in London, not his earlier life in Boston and Philadelphia.

An average reader could have problems finding and following the main idea in this book and the first introductory pages. Even then, however, the reader will likely find Franklin as intriguing and thought provoking as ever.

Despite being such a concise book, Benjamin Franklin serves up a credible summary of its subject’s life. The text is only 182 pages bit it also has annotation and a select bibliography. It is an addition to the Critical Lives series.