Bending the Frame: Photojournalism, Documentary, and the Citizen 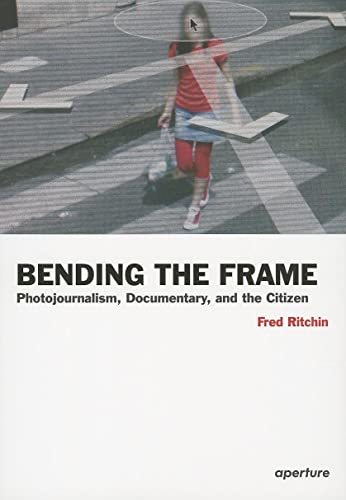 In this comprehensive book, Fred Ritchin attempts to disentangle the various threads in the debate around how photojournalism can deal with the challenges of new digital media.

As print journalism increasingly struggles to adapt to new realities, there has been a polarization around two core positions.

On the one side, traditionalists argue that a golden age of impartial print photojournalism has been replaced by a free-for-all of amateur bloggers and cell phone activists with narrow agendas.

On the other, independent photojournalists argue passionately for the freedom and creativity offered outside the walls of faltering print empires. This book sets out to look critically at traditional photojournalism and explore the new directions being taken by both print and digital media.

Unlike many commentators, Mr Ritchin is eminently qualified to write on this topic. His stint as a photo editor for the New York Times Magazine and his current position as Professor of Photography at New York University Tisch School of the Arts give him a perspective that makes for an intelligent and perceptive analysis of the key issues.

As he points out, the golden age of photojournalism turns out, on closer inspection, to be a myth. In support, he quotes the photographer Philip Jones Griffiths’ somewhat cynical definition of a typical photo assignment:

“We want the photographer to go to country X and illustrate our preconceptions.”

The mainstream coverage of the Iraq War did little or nothing to dispel this sorry view of photojournalism. The White House and Pentagon managed to ensure that few independent voices had access to the activities of US troops, leaving the mainstream media with little choice but to embrace the new concept of "embedded" journalism, along with all the unfortunate Freudian connotations of that word.

Mr Ritchin argues that the real power of photojournalism has been further diluted by photographers who tend to fall back on visual clichés. This often proves an easier route than attempting to probe deeper into the issues around the mayhem they were sent to document.

“In Iraq, for example, little insight was provided on the differences between and among Shias and Sunnis as the United States invaded.”

This superficial approach to explaining highly complex matters is even more evident in the coverage of countries like Afghanistan and Syria where important differences of tribes and religions are ignored because editors want to run images that tell the simplest story by offering up, yet again, the clichéd images of every war since photography began. Mr Ritchin calls this approach the "hyperbole" of editorial photography.

Such oversimplification leads to images that reduce the story to its crudest elements – mangled bodies and destroyed buildings. This impoverished visual vocabulary eventually stultifies our sensitivities, with the result that we turn away from the very images that are supposed to galvanize us into reaction and, perhaps, action.

Mr Ritchin suggests that the immediacy of cellphone images is, in effect, more successful at reaching the audience than is the work of "traditional" photojournalists working to the dictates of their news desks back home.

“Rather than claiming a doctrine of journalistic objectivity or neutrality, the very subjectivity of non-professionals, their transparent self-involvement and lack of financial incentive, can be reassuring—many viewers may empathize with the motivations of these ordinary citizens, which are possibly similar to their own.”

Yet Mr Ritchin astutely points out that this mantle of subjectivity, eagerly adopted by non-professionals, was not invented by them. He cites as an example the work of W. Eugene Smith who chronicled the appalling results of the mercury poisoning at Minamata.

Print media have to balance the editorial needs of objectivity with the desire to win readers with more crusading subjective work. There is no doubt that they are experimenting with new approaches but Mr Ritchin points out, however, that their hearts may not really be in it.

“Even for major publications such as the New York Times, the New Yorker, and TIME, much of the most interesting photographic work and commentary are published on blogs—“Lens,” “Photo Booth,” and “LightBox,” respectively—rather than integrated into the main body of the publication, reflecting an unwillingness or inability to experiment with some of the ideas expressed in these offshoots.

One of Mr Ritchin’s most interesting ideas is that the new photojournalism will bring about a changed relationship between those who report and those who consume news.

“The collapsing boundaries between author and reader—a collaborative coauthoring that literary deconstructionists have been theorizing for decades—opens up the expectation that the greater media world now may function in more of a conversational rather than simply a hierarchical, mostly top-down system.”

It remains to be seen whether this relationship can flourish in the free-for-all of the Internet where there are few signposts to lead a reader to work which is truly of merit. Mr Ritchin’s book provides numerous and interesting examples of new directions in photojournalism. But it is something of an irony that this book is in print format, as an e-version would make accessing these sites with hot links so much easier.

The speed of electronic and technological change means that the practice and theory of photography is constantly developing in new directions. At the core of photojournalism lies the need for the viewer to understand the motives of the person clicking the shutter.

Mr Ritchin’s book helps us to identify some of the critical issues central to the making of photojournalism and to every photographer who takes on the responsibility of telling a story, whether published in print or digital form.

Declan O'Neill for the past 15 years he has run a photography and video production business in New Zealand. He has published three books on the New Zealand landscape and writes articles on the practice and craft of photography.