Bend, Not Break: A Life in Two Worlds 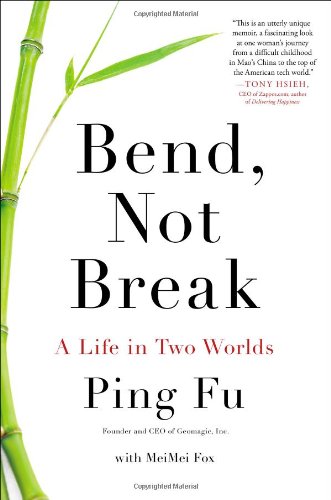 “. . . the journey is as compelling as the destination. . . . a role model to those wise enough to use life’s lessons and opportunities to meet present day challenges.”

This is a spare but dense memoir. Bend, Not Break is an astounding success story, with a generous sprinkling of ancient Asian and contemporary teachings—life lessons available to any reader willing to learn from them.

Ping Fu begins her story as she is exiled from China and en route to America. From here, she transports us back and forth between two worlds. The first is her early life in China during Chairman Mao’s Cultural Revolution. The second is in America during this country’s technological revolution.

As a child and throughout life she learned from the wisdom of ancient and contemporary writers. The title of her memoir is taken from her father’s teaching—“Bamboo is flexible, bending with the wind but never breaking, capable of adapting to any circumstance.”

Ping Fu’s survival and success is in itself incredible. Ultimately, she becomes CEO of Geomagic, a 3D software company, guiding it during boom and recessionary times. She was also nationally recognized as an Inc. magazine “Entrepreneur of the Year;” however, the outcome is only part of the story.

In Ping Fu’s case, the journey is as compelling as the destination.

At age eight, she is removed from her highly educated, affluent family and housed with thousands of others for “re-education” during China’s Cultural Revolution. At age ten, as a worker in a factory, she quickly learned to assemble radios and master wiring diagrams.

During this ten-year period, while raising her sister in the squalor of a converted dormitory, she endured physical, mental, and sexual abuse at the hands of the Red Guards, whose purpose was to convince her of her worthlessness.

After one of these guards confiscated and burned her journals, she descended into near madness.

“But after that day, I became a different person,, one who no longer clung to anything or anyone. . . . My ears filled only with silence. My eyes saw only flames. All that was left behind was a body resembling me.”

She attributes her survival to the random kindness of a few people:

“Sometimes in life, out of the clear blue sky comes a vicious storm. . . . We might feel as though we’ll never escape the dark crevasse. But there is always hope. Just when I felt like giving up, a stranger would leave food at my threshold or a letter from my Shanghai Mama would arrive. I clung to such moments of grace, no matter how small, as proof that behind every closed door, there lies an open space.”

Other examples include an uncle who smuggled books, awakening her love of literature. Above all, he never let her forget her worth. A teacher helped her to avoid certain abusers. A mentor at the factory continually encouraged her. She in turn, endeavored to treat even her persecutors with kindness, like helping them with tasks such as writing that were difficult for them.

Throughout her life, Ping Fu survived by taking risks. At the time of her exile, she left China with only enough money for a connecting flight to New Mexico. (What was she thinking, you ask? Details come later.) She was totally unprepared for her new life at the University of New Mexico, but faced each day, forging ahead, even teaching herself mathematical concepts missing from her Chinese education.

In spite of cultural and language barriers, she learned computer programming and—perhaps more importantly—how to work with teams. This combination proved invaluable as she and thousands of others rode the waves of America’s technological revolution.

Timing and luck played a part in her destiny, but there is no denying her courage, relentless effort, and ability to learn from experience and opportunity. No doubt these were the qualities that enabled her to say “I will” when confronted with the opportunity of starting a software company.

Ping Fu is honest about mistakes and guarded about success, whether in her career, her personal life, or as a mother. She looks back, realizing that the peaks and valleys of professional and personal life are just that: part of life.

There are too many self-congratulatory memoirs circulating in today’s business world. Bend, Not Break book stands apart.

The narrative style of using flashbacks does not enhance this fascinating and well-written story. We learn, for example, of the reason for her exile only at the very end of the book. While this provides incentive for the reader to continue reading, it tends to be confusing.

Nevertheless, it is hard to imagine anyone reading this book who would not be inspired by Ping Fu—timing and luck notwithstanding. She serves as a role model to those wise enough to use life’s lessons and opportunities to meet present day challenges.