The Beloved Dead (The Arthurian Mysteries) 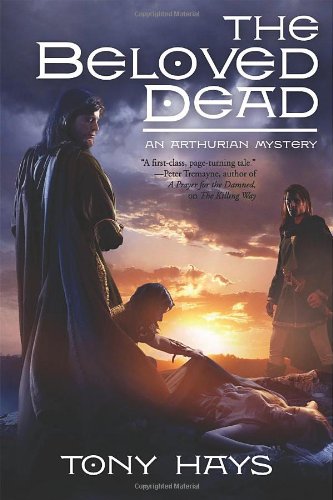 Could the King Arthur legend support a serial killer? Tony Hays says yes, it could.

In the third volume of his Arthurian Mysteries series, in which he entwines King Arthur’s life and ascension to power with a murder mystery, Arthur has recently been crowned the Rigotamos, the High King of all Britannia, after bringing a measure of peace and stability to Britain. He has managed to unite the warring factions of various rival tribal lords in a victorious campaign against the Saxon invaders. The crown lays uneasy however and Arthur seeks to consolidate his power.

Arthur is a fervent believer in “the Christ.” In an ill-advised attempt to banish Druidic superstition in favor of faith in God, he manages to call down a curse on his reign from a Druid priest. Simultaneously, a maiden is brutally murdered, violated and mutilated, suggesting the validity of the curse. Naturally a murder requires a detective and, sure enough, Arthur has his own private investigator, Malgwyn, also his most trusted advisor.

True to murder mystery form, Malgwyn has personal troubles: deep grief over the slaughter of his beloved wife by Saxons and a weakness for alcohol. Because Arthur saved this man’s life, though not his right arm, Malgwyn pulled himself out of a suicidal depression to assist the king for whom he has a deep love.

Before Malgwyn can begin his investigation however, he has the task of fetching and delivering Arthur’s new bride, Gwyneira, from her northern home. She is the 14-year-old daughter of a powerful lord, and the marriage is wholly political, designed to strengthen Arthur’s position. During the arduous two-week journey, two more maidens are murdered in the same gruesome manner.

A certain sort of reader cannot resist any versions of the King Arthur tale. Mr. Hays’ interpretation favors historical research and clearly presents Arthur as a real figure as opposed to a myth. The political situation of the times anchors the story, taking into account the chaos that resulted when the Romans pulled out of Britain as well as the conflict between the ancient Druidical beliefs and the new Christian faith. Ever the idealist who cares deeply for the people of his land and dreams of peace, Arthur is also portrayed as somewhat pig-headed and impetuous.

The Beloved Dead is not the feminist magical mystery tour of Mists of Avalon nor is it the whimsical political satire of The Once and Future King. Though Tony Hays has been compared to Bernard Cornwell, who has also penned an Arthurian trilogy, his writing is not literary. The tone is closer to the noir style of Ed McBain or Raymond Chandler. An annoying tendency to repeat himself, for example regarding the impossibility of men understanding women, and a bleary sense of the passage of time are overcome by a satisfyingly complex story.

For those of us compelled to read any story we can get our hands on when it comes to Arthur, Guinevere, Merlin, and the rest, half the fun is comparing myriad tellings of the tale.