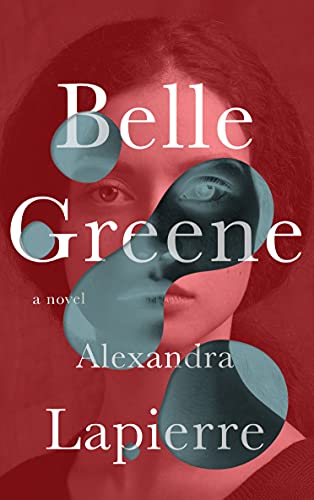 “Lapierre has intimately portrayed a woman whose true worth was hidden in plain sight for decades. It is an extraordinary story of a woman who stood in defiance of the world’s expectations and chose to write her own story.”

Genevieve Greener’s life has come to a crisis. Although she is a member of the large and prestigious Fleet family of the Black quarter of Georgetown, she is now in New York City and her estranged husband, famous Black activist Richard Greener has left his family in financial straits and gone overseas.

Spurred by her daughter Belle, Genevieve’s children have expressed a wish to change their identity and live as white. While “passing” for white would bring educational and economic benefits, it would also bring with it tremendous danger. In addition to this physical danger, they would have to sever all ties with their large and close-knit family in Washington. And they would have to vow to never have children because although they have Caucasian features, there would be no guarantee that their children would.

In spite of these hardships, Belle Greener is ambitious and persuasive, and the family follows her lead, changing their identity, address, and cutting off all ties with their past. Now, instead of the Greener family of Georgetown, they are the Greene family of New York City. Belle takes advantage of her newly found privilege and gets a certificate in library cataloguing, eventually landing a job at Princeton’s library.

It is here that she forms the friendships and contacts that will create her remarkable life. She meets Junius Morgan, nephew of the famous banker, J. P. Morgan. She and Junius bond over their love of manuscripts, their love of collecting these famous works together, and their reverence for the way books are handled and housed. Junius recognizes Belle’s passion for books, and it is at his recommendation that his uncle, J. P. Morgan, offers Belle a job as his private librarian.

Morgan is exacting in his demands, but somehow finds a kindred spirit in Belle. She does not back down from his fits of temper, and her efficiency and discreetness become invaluable to him. After she secures a highly sought-after set of books from Lord Amherst in London, her importance to Morgan is cemented. Throughout her career, Belle proves herself to be a shrewd businesswoman, securing for the Pierpoint Morgan library exceptional manuscripts.

After the Titanic sinks, two days after Morgan cancels his reservation onboard, a rift opens in the Greene family. Morgan, owner of the doomed vessel, doubled his insurance days before the sinking, and the public becomes suspicious.

After a lengthy testimony in front of congress, Morgan is cleared of wrongdoing and returns to New York in high spirits, ready to leave for a trip to Cairo and Rome. But the strain of the previous months has taken its toll. Burdened with the tremendous loss of life on the Titanic and the strain of the testimony in Washington, Belle receives word that her Big Chief, J. P. Morgan, has died in Rome.

Uneasy about where this leaves her, her necessity to the Morgan family, in particular heir Jack Morgan, becomes apparent when the inheritance tax needs a meticulous and careful inventory of J. P. Morgan’s estate. Jack enlists Belle to stay with the library for two years to catalog J. P. Morgan’s tremendous hoard of art treasures. After proving her worth to the son as she did with his father, Belle remains with the library, and as a valuable member of the Morgan family for the rest of her life.

With the aid of Belle, Jack Morgan, who at one time sought to dissolve the vast collection of the Pierpoint Morgan library, opens its doors to the public in what is seen as one of the most generous acts of public service to date. And it fulfills Belle Da Costa Greene’s greatest dream and ambition, to allow everyone to see the beautiful works of art and literature that the Morgan family has spent decades collecting.

Belle Greene’s career successes do not insulate her from the ever-constant danger of being discovered as “passing” in a white man’s world. Her secret will haunt not only her, but her entire family for the rest of their lives. In spite of the vow made by the Greener children, the youngest sister, “Teddy” has a son. After the death of the child’s father in World War One, Belle undertakes to raise and educate him. Sadly, it is on his shoulders that the weight of the family secret will fall, and it will alter the course of his promising life forever.

In the novel, Belle Greene, author Alexandra Lapierre breathes life into a fierce and formidable protagonist. The sheer amount of research is stunning in its scope and pays off in a story that is at once fascinating and believable. There is nothing forced or fabricated. It is inspiring and sobering and illustrates the tremendous amount of energy and risk necessary to accomplish what Belle Greene accomplished.

Lapierre has intimately portrayed a woman whose true worth was hidden in plain sight for decades. It is an extraordinary story of a woman who stood in defiance of the world’s expectations and chose to write her own story.