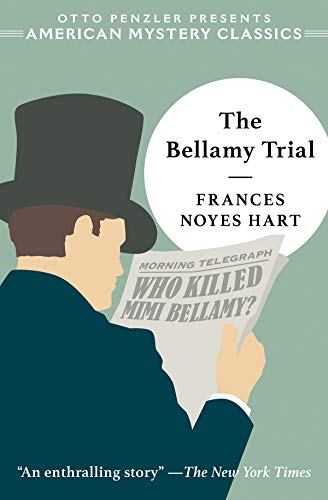 “add this fine reissue of The Bellamy Trial to your reading list. It’s remarkably written, it’s carefully crafted, and it’s more than worthy of your time and interest.”

Madeleine Bellamy has been murdered in a wealthy town on Long Island. Susan Ives and the victim’s husband, Stephen Bellamy, have been accused of the crime and must stand trial. Lasting eight days, the ordeal exposes the sordid secrets of two prominent families in what becomes a courtroom drama the likes of which has never been seen before in this privileged community.

The Bellamy Trial, inspired by one of the most sensational murder trials of its day, was the third book published by Frances Noyes Hart. It was originally serialized in the Saturday Evening Post before being published in book form by Doubleday, Page and Company in 1927.

Born in 1890, the author was the daughter of Frank Brett Noyes, a prominent journalist who was president of the Washington Evening Star and a founder and president of the Associated Press. She studied at the Sorbonne and Columbia University and married lawyer Edward H. Hart in 1921. She passed away in 1943.

As Hank Phillippi Ryan points out in her excellent Introduction to the reissue of this classic that has found its way to our reading chair, The Bellamy Trial “is surely one of the very first legal thrillers ever written.” Included in the famous Haycraft-Queen Cornerstones list of definitive mysteries compiled by Howard Haycraft and expanded by Ellery Queen, it’s “a murder mystery without a detective” and “a tour de force of point of view.”

The primary points of view in the novel belong to two characters whose names we are never told. One, referred to by the narrator as only “the red-headed girl,” is a writer on her first newspaper assignment. Callow and nervous, she sits in the front row next to “the reporter,” an experienced journalist with whom the red-headed girl develops an uneasy, emotional relationship as the trial progresses.

Each twist and turn in the trial is filtered through the perceptions of these two individuals. The red-headed girl begins by proclaiming to the reporter that murder is “the most enthralling and absorbing theme in the world” and “the only thing that’s absolutely real in the world.” It reminds us, she declares, “that it’s good and dangerous and beautiful to be alive.”

Playing her cynical foil, the reporter retorts that murder is “a dirty, bloody, beastly business that used to keep me awake nights until I grew a shell over my skin.” As the pathos and horror of Madeleine Bellamy’s brutal killing is drawn out and exposed over the course of eight days, we see the compass needle of the red-headed girl move steadily from her early naive enthusiasm toward the darker, more realistic point of view of the reporter.

As a narrative, the novel reads like a stage play, with all the action occurring within the court room in which the trial takes place.

Indeed, when the red-headed girl finds her seat on the first day and takes in her surroundings, the empty space beyond the low rail in front of her reminds her of a stage waiting for its actors to appear. Each day that follows brings a new set of performers as the witnesses testify, the lawyers posture and interrogate, and the judge labors to maintain order.

The author does a masterful job of telling the stories behind the story in this single setting, using the courtroom and its collective audience as something approaching another character in its own right. For example, when a witness makes a particularly telling admission,

“The courtroom drew in its breath sharply—a little sigh for its lost ease—and moved forward the inch that separated suspense from polite attention.”

Publisher Otto Penzler is a man on a mission when it comes to crime fiction. Owner of the world-famous Mysterious Bookshop in New York and founder of the Mysterious Press, he created Penzler Publishers in 2018 as a new house through which to publish American Mystery Classics, a line of reissued novels that originally appeared between the two world wars. The Bellamy Trial is one of 19 titles already in print or that will be coming soon, and it’s a fine-looking edition.

Perhaps the novel isn’t quite up to modern standards set by the likes of John Grisham or Scott Turow. Perhaps our expectations of legal thrillers is somewhat different today than what it was when this novel followed the publication of Agatha Christie’s Witness for the Prosecution (1925) as early contributions to this emerging genre.

But give an inch, reader, the inch that separates polite attention from suspense, and add this fine reissue of The Bellamy Trial to your reading list. It’s remarkably written, it’s carefully crafted, and it’s more than worthy of your time and interest.