The Bell of Treason: The 1938 Munich Agreement in Czechoslovakia 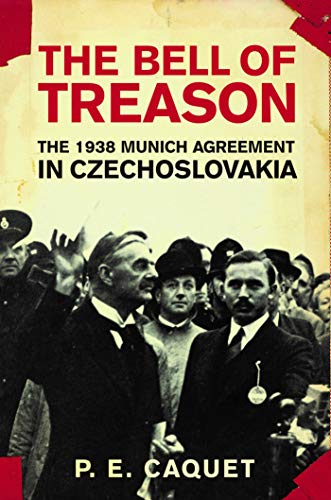 “This is the story of catastrophic misjudgments, wishful thinking, and outright betrayal of Czechoslovakia by Europe’s leading powers.”

The 1938 Munich Agreement that led to the dismemberment and eventual annexation of Czechoslovakia by Nazi Germany is one of those seminal historic events from which statesmen and diplomats attempt to discern lessons. The most enduring “lesson” of Munich is that appeasement of the demands of an expansionist power only leads to greater demands and, eventually, war.

At Munich in September 1938, Britain and France pressured Czechoslovak leaders to cede the Sudetenland to Germany. This led eventually to Nazi annexation of the entire country. And it further convinced Hitler that Britain and France lacked the will to stop his expansionist aims.

Since the end of the Second World War, the “lessons of Munich” have been invoked by Western (mostly U.S.) leaders to support the NATO alliance; to wage war on the Korean peninsula; to threaten nuclear war to avoid Chinese conquest of Taiwan, Quemoy, and Matsu; to defend the independence of West Berlin; to wage war in Indochina; to wage war over the Falkland Islands; and to support authoritarian regimes in Central America, the Middle East, and elsewhere.

Statesmen have learned the hard way, however, that the Munich Agreement and the events leading up to it, like all historical events, are unique to time, place, and circumstances. That is not to say that prudent reflection on those events cannot inform and enlighten statesmen, diplomats and, for that matter, historians. But it is the essence of historical wisdom to use analogies sparingly and modestly.

Cambridge historian P. E. Caquet in his new book about the Munich Agreement is unsparing in his judgment of the British and French appeasers who sought to avoid war by pressuring Czechoslovak leaders to give in to Hitler’s demands.

This is the story of catastrophic misjudgments, wishful thinking, and outright betrayal of Czechoslovakia by Europe’s leading powers. British Prime Minister Neville Chamberlain and French Premier Edouard Daladier made both moral and strategic errors by attempting to appease Hitler. With the benefit of hindsight, the strategic errors are more unforgivable than the moral ones.

Caquet views the events leading to Munich from a Czechoslovakian perspective. His treatment of Munich emphasizes the sufferings of the Czechoslovak citizens who Britain and France consigned to Nazi rule with all that entailed—the discrimination against, and round up and murder of, Jews; the arrest, imprisonment, and in some cases murder of Czechoslovak “enemies” of the Nazi regime; the loss of democratic freedoms; the darkness of totalitarian rule.

International relations, however, is not a morality play. To paraphrase the political philosopher and foreign affairs strategist James Burnham: Sometimes you may have to throw your friends to the wolves, but it makes no sense to pretend you’re doing something noble when you do it.

At Munich, Britain and France threw Czechoslovakia to the wolves and claimed, in Chamberlain’s words, to be bringing “peace in our time.” If that was true, and Munich led to a peace, however unjust, that saved 60 million lives, it would have been a diplomatic triumph. Instead, as Caquet notes, the Western powers coerced a potentially important strategic ally to surrender important fortifications and much of its industrial strength for empty promises. Munich made war more, not less, likely.

Caquet notes that Czechoslovak political and military leaders, as well as its population as a whole, were prepared to fight Germany in alliance with Britain, France and, perhaps, the Soviet Union.

Some revisionist historians have attempted to justify appeasement on the grounds that it bought the Western powers more time to rearm. Caquet dispels such notions. “A retrospective justification of Munich, among the appeasers themselves and among revisionist historians,” he explains, “has been that the agreement bought rearmament time for the Entente powers. This argument . . . counts neither the forces that the Czechoslovaks brought to the fight nor the contribution their armaments made to Hitler’s armies, after they were bloodlessly conquered.”

Caquet notes that at the time of Munich, Czechoslovakia “possessed a world-class armaments industry,” formidable anti-aircraft defenses, an “extensive fortification line,” and 42 fully mobilized divisions. “The state of domestic opinion,” Caquet shows, “supported a firm, even belligerent stance” against the Nazis. Moreover, Soviet diplomats reached out to both Britain and France in support of Czechoslovakia.

Furthermore, Hitler’s generals knew that Germany could not easily defeat Czechoslovakia’s army, and were not prepared in 1938 to fight a two-front war against a Franco-Czechoslovak alliance. British and French leaders, haunted by the slaughter of the Somme and Verdun, ignored the strategic realities.

As so often during the 1930s, Winston Churchill fully grasped the strategic loss suffered at Munich. “The partition of Czechoslovakia under Anglo-French pressure,” he said shortly after Munich, “amounts to a complete surrender by the Western Democracies to the Nazi threat of force. . . . The neutralization of Czechoslovakia alone means the liberation of 25 German divisions to threaten the Western front. The path to the Black Sea will be laid wide open to triumphant Nazism.” And further, “The system of alliances in Central Europe upon which France has relied for her safety has been swept away . . .”

Czechoslovak leaders understood this, too. President Edvard Benes, after succumbing to pressure from the Western powers, told a colleague: “This is the end. This is a piece of perfidy that will bring its own punishment upon itself. It’s unbelievable, they think they can save themselves from war or from revolution at our expense. They are wrong.”

Caquet describes the almost universal sense of despair and betrayal felt by Czechoslovak citizens. “The pain and consternation,” he writes, “were greatest in the army, at the border, where men and officers had been waiting for the war to start. The humiliation was hardest on soldiers who were now forced to evacuate before an enemy they had not been allowed to fight.”

President Benes summed up his nation’s reaction to Munich: “We are abandoned and betrayed, they [Britain and France] are cowards.”

Caquet is also rightly critical of Poland and Hungary who became minor accomplices in the dismemberment of Czechoslovakia as a result of Munich. The post-Munich rump Czech state was indefensible. Abandoned, betrayed, hopeless, it subsequently surrendered to Hitler without a fight.

British and French pledges after Munich to support Poland against a German attack predictably failed to deter Hitler, whose subsequent non-aggression pact with Soviet Russia paved the way for Poland’s demise and the beginning of the European phase of the Second World War. Though Britain and France declared war on Germany, there was little they could do to stop the Nazi blitzkrieg. Appeasement had borne murderous fruit.

For Czechoslovakia, as Caquet points out, Munich’s legacy was 50 years of totalitarian rule—first by Nazis, then by Communists. Although Munich’s lessons may have been misapplied in some instances, its infamy must never be forgotten.