The Believing Brain: From Ghosts and Gods to Politics and Conspiracies---How We Construct Beliefs and Reinforce Them as Truths 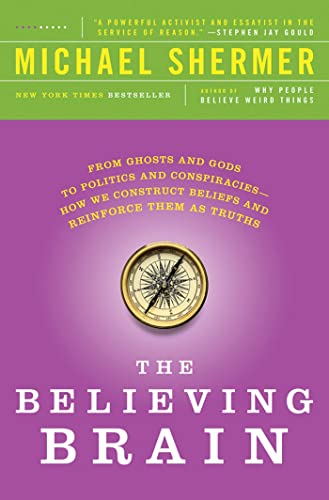 “Belief comes first, rationalizations follow behind. That is the basic theme of this new book on belief by professional skeptic, Michael Shermer.”

Belief comes first, rationalizations follow behind. That is the basic theme of this new book on belief by professional skeptic, Michael Shermer.

Belief comes first because we’re wired that way, Dr. Shermer says. We see patterns in everything (sometimes even when they aren’t there) and we are disposed to see an active agent behind every pattern (even the false ones, and even when there is no one there.) According to Dr. Shermer, finding patterns in the world and ascribing agency to their creation is the foundation for beliefs of all kinds, from political opinions through conspiracy theories, to alien abductions, gods, and demons.

As evidence that we are avid pattern-finders, Dr. Shermer presents psychological results going back to the operant conditioning of “superstitious” behavior in animals by B. F. Skinner and the other Behaviorists; the work of ethologists like Konrad Lorenz on “imprinting;” and from other areas such as face recognition and pattern finding under uncertainty. It is a solid and well-established case, backed up by more recent work by Susan Blackmore on how people who are believers in the supernatural are more likely to see patterns in noisy images than nonbelievers. He also believes there are good evolutionary reasons for us being this way.

For our tendency to ascribe agency, he cites the work of psychologist Bruce Hood, looks at out of body experiences, and tells of his own experiences with Michael Persinger’s “God Helmet” (which induces neuron firing in the temporal lobes using strong magnetic fields, during which some subjects have reported intense religious experiences). He also discusses magicians and skilled illusionists and the work of Randi and others in debunking them. Here Dr. Shermer’s case is weaker, relying heavily on personal anecdotes rather than on scientific studies.

To convince us that belief always precedes reasoned argument, Dr. Shermer takes us on an extended tour of beliefs of various kinds—political, religious, conspiracy theories, alien abductions, and so on. If you’ve read other books by Dr. Shermer—particularly Why People Believe Weird Things and The Mind of the Market—you’ll already be familiar with most of the material here.

While fascinating in places and challenging in others, The Believing Brain is, in the end, disappointing. The mass of anecdote, sprinkled with odd bits of science, is not convincing and often seems to ramble away from the central argument. There is a curious section in which Dr. Shermer attempts to mount a scientific defense of free market economics, which will no doubt be as irritating to a liberal reader as it is unconvincing to a scientist. In fact, it illustrates Dr Shermer’s theme perfectly—albeit unintentionally—by showing how scientific findings can be cherry-picked to build arguments around a belief that is already entrenched in the author’s mind.

Having presented the case that we form beliefs on the basis of unconscious, often irrational processes, and that all our argumentation in support of these beliefs is then added post hoc and subject to a wide range of cognitive biases which he lists and explains, Dr Shermer leaves us in a near-hopeless state. The human condition, according to this perspective, is one of deep-rooted, biased subjectivity and perpetual, unresolvable conflict between believers with different sets of beliefs.

To save us from this conclusion, he attempts, at the end of the book, to present the scientific method as a way out of the morass. By basing judgments of truth on what is repeatedly observable by anyone making those observations in the same circumstances, and by insisting that explanations of observations are themselves to be subject to tests whose outcomes must also be observable by anyone who performs them in the same way, Dr. Shermer says science might cut through the fog of individual bias, superstition, and prejudice, to yield something like a true understanding of the world. “The God question” he says, is only immune to scientific examination as long as you only make claims about gods that cannot, even in principle, be examined with the scientific method. Since many claims about gods can quite easily be examined scientifically—like the healing power of prayer—even this area of belief is not wholly immune.

Yet the value he places on objectivity rather than subjectivity—of external rather than internal reality—simply reveals more of his own personal beliefs. Yes, science could cut the Gordian knot of superstition, but only for those whose beliefs match Dr. Shermer’s. By his own logic, for those who believe that objective reality is unimportant or even nonexistent, arguments that stem from other sets of beliefs will be never be persuasive. In fact, the more convincing we find Dr. Shermer’s thesis, the less likely it seems that scientific and superstitious world-views could ever be resolved.

It would be easy to say that you should read this book and make up your own mind, but, if Dr. Shermer is right, you have already made up your mind and this book will either reinforce your beliefs or spur you to challenge the author’s. Nevertheless, this reviewer’s belief is that a good dose of skepticism is always healthy, having your beliefs challenged is always good for you, and these things are exactly what you can count on from this book.