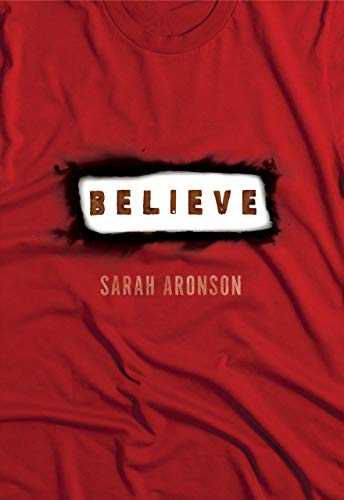 The typical problem novel, while relevant, is narrowly focused on the protagonist’s very personal relationship with his or her own difficulties. Ms. Aronson is more interested in the wider view of her adolescent narrators’ troubles.

In both Head Case (Roaring Book Press, 2007) and her new book Believe, each novel’s central problem is magnified by loud voices within the protagonists’ greater community. Ms. Aronson’s characters aren’t allowed to suffer in silence. Instead, their pain is reflected on television, in major news outlets, and on Internet chat sites.

Fans of Head Case, with its pull-no-punches quadriplegic teenaged male narrator, will find plenty to love in the female narrator of Believe.

Again, Ms. Aronson writes a quirky, flawed and funny protagonist. Janine Friedman has the misfortune of accidental fame. At six, she was the only one to make it out alive from the terrorist attack that killed her parents.

Yet Janine did not emerge unscathed. Her hands—and the trajectory of her life—were permanently maimed. Even worse, the event captured the hearts of an international audience, branding her forever as the Soul Survivor. But the reader quickly learns that an international brand is not the same as the truth.

“You never really knew me,” is Janine’s opening gambit. “I was a photo in a magazine, the cover that made you weep. I was long brown hair, big green eyes, and pale skin—an innocent girl, alone in a foreign land. I was a moment in time. I was a story.”

As the book opens, the tenth anniversary of the blast approaches, and flashy so-called journalists and photographers are hounding her for retrospective coverage. Janine wants nothing to do with the fame or the media.

“It is hard enough being a sixteen-year-old orphan, living with your mother’s sister, making everyday decisions like what looks best with black jeans and if the time has come to have sex with your boyfriend,” she complains. Photographers hiding in the shrubbery are more than most teens could endure.

But strangers aren’t the only ones hounding Janine. Her friends want to use Janine’s 15 minutes of media attention to draw attention to another worthy cause. And the man who dug her out of the rubble ten years ago is now a successful evangelist with an agenda of his own.

Janine’s stigmata-like hand wounds make him—and others—believe that she has special healing powers. Then, when a friend is seriously injured, for the first time it appears that they might be right.

And therein lies the real heart of Believe. Janine’s biggest issue is not her injury or the TV cameras. Her real problem is the heavy weight of expectation. The genius of this book is the way Ms. Aronson externalizes Janine’s deformity into a visible mark of those expectations.

Chances are that every teen reader of Believe faces his or her own weighty expectations from parents, teachers and peers. By making Janine’s so visceral, the common experience of teen pressure can be thoroughly explored.

While many YA narratives are more linear than this one, Believe is big and ambitious tale with as many themes as characters. The book takes on fame, popularity, the Middle East conflict, religion, faith, mega churches, medicine, the right to die, fashion design, and forgiveness. And that’s just before breakfast.

Readers willing to travel this sprawling path are rewarded with a story that is meaningful, heartwarming, and well told.