Being Oscar: From Mob Lawyer to Mayor of Los Vegas—Only in America 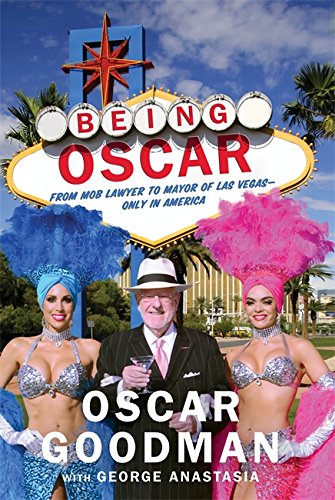 “Goodman clearly has had a great run, and as he puts it toward the end of his memoir, he isn’t done yet. If anyone gives you odds that Oscar Goodman will drink the first martini on Mars, take that bet.”

Oscar Goodman, former mob lawyer and mayor of Las Vegas, describes himself as the happiest mayor in America. It may be more accurate to suggest that he is the happiest man in America. At least that’s the sense you get from his ebullient, defiant, and thoroughly engaging memoir Being Oscar, From Mob Lawyer to Mayor of Los Vegas—Only in America.

Only in America? How about only in Vegas? Where else can an individual rise up from the ranks of newly hatched attorney to represent some of the most notorious mobsters and criminals in the world? Goodman’s meteoric rise involved him with names you might recognize from the ten most wanted list, photos on the wall of your local post office, or films like Casino.

Frank “Lefty” Rosenthal, Tony “the Ant” Spilatro, and a host of other hoodlums, famous and otherwise, were Oscar’s clients. And he helped pretty much every single one of them beat the rack.

Goodman confronts head on the question of the legitimacy of providing representation to such highly unsavory characters. He is forceful in his own defense. In his mind, he was defending not just those individuals but the Constitution itself. He constantly bemoans the illegal, extrajudicial, and often Gestapo-like tactics of the gendarmes, especially the FBI. Goodman had no problem going toe to toe with law enforcement, managing to create a sense of reasonable doubt in juries from coast to coast.

But it’s in Vegas that Goodman felt most at home. After decades of representing mobsters, Goodman decided to run for mayor. He won and served three terms, revitalizing Las Vegas’s downtown, doing battle with President Obama, who repeatedly used Las Vegas as a whipping boy for all of America’s social ills, and enjoying himself immensely. Goodman typically appeared with a martini glass in hand and a Vegas showgirl on each arm, whether he was at City Hall or visiting Paris or Rome. Goodman represented Vegas’s excesses and sense of humor about itself to a tee.

Goodman is also quite frank about his own vices. Seldom does the author finish an evening without a martini or multiple martinis. He also describes himself as an inveterate but not degenerate gambler, distinguishing himself from people who would put their families at risk because of their gambling compunction. But really, why wouldn’t you want a mayor of Las Vegas who drinks and gambles? Isn’t that the whole point of Sin City? Goodman certainly feels that way.

Contributing greatly to Goodman’s happiness, he reports, is his marriage of more than half a century and his children. He repeatedly gives loving credit to his spouse and family for keeping him on the straight and narrow, or at least as straight and narrow a path as one might find when one weaves personally and professionally among the casinos.

Goodman clearly has had a great run, and as he puts it toward the end of his memoir, he isn’t done yet. If anyone gives you odds that Oscar Goodman will drink the first martini on Mars, take that bet.