Being John Lennon: A Restless Life 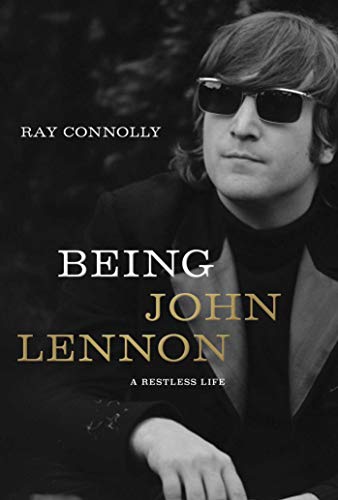 “Connelly is too slow for his own good. The idea that he waited 38 years since Lennon’s murder to write this bio is astonishing. Talk about sitting on a story!”

After reading Being John Lennon by longtime Beatles chronicler Ray Connolly, one can’t but help think that John Lennon simply never grew up. Murdered at age 40, he was, to the end of his life, a petulant genius, capable of writing great songs and administering great cruelty to those who knew him.

Toward the end of this encyclopedic biography, Connolly, who interviewed Lennon countless times, sums it up this way: “Though millions who didn’t know him loved him, sometimes those who knew him well didn’t always like him. A natural leader, who could so easily be led and who saw himself as a chameleon, he was at various times a clever, witty, angry, funny, sharp-tongued, far-sighted, impetuous, talented, guilt-laden, preaching, sardonic, exaggerating, gullible, aggressive, unfaithful, obsessive, self-absorbed, outspoken, jealous, sometimes cruel but often generous man. He was certainly no saint, but, to his friends, he was hard not to like. Above all, he was absolutely a one-off.”

Because Lennon died so young, he seems never to have achieved perspective on his life. It must have been hard for any Beatle. Famous in their early twenties, they were showered with lavish praise worldwide, especially Lennon and McCartney. It’s a minor miracle that Paul and Ringo are seemingly as normal as they appear but they have the benefit of having lived a long, full life.

Lennon didn’t have that. Connolly makes it clear that Lennon was still being buffeted by events rather than choosing them. Yeah, he started the Beatles but Paul broke them up. Lennon never even lived alone, going from Paul and onetime wife Cynthia to Yoko to girlfriend May Pang and then back to Yoko again.

Lennon famously did not suffer fools but, as Connolly points out, it was relatively easy for Yoko to make a fool of him. She simply stalked him until he gave in to her avant-garde personality and, as Lennon once said, “Avant-garde is French for bullshit.” If only he’d listened to himself.

There is an untold number of books on the Beatles but at least Connolly actually knew the boys. That counts. In probably his most famous moment, Lennon handed the author one of the biggest scoops in the world at that point, the revelation that Lennon was going to quit the Beatles. Later, when Paul beat him to the punch, Lennon cornered Connolly. It’s one of Connolly’s best stories:

“Why didn’t you write it when I told you in Canada at Christmas,” he asked me that day.

“You’re the journalist, Connolly, not me,” he stabbed back.

The problem here is similar—Connolly waited too long to write this book. He may have intimate knowledge of the lads but Lennon was right—Connolly is too slow for his own good. The idea that he waited 38 years since Lennon’s murder to write this bio is astonishing. Talk about sitting on a story!

The sad truth is that, by now, there’s nearly nothing left to squeeze from the life of the Beatles. Any Beatles fan can recite all the touchstone moments off the top of his head—the day John met Paul, the day Pete Best was replaced by Ringo Star, the trips to Germany, the achievement of Sgt. Pepper, the day John met Yoko, the recording of the White Album, the rooftop concert and, the worst day of all, when Lennon was murdered.

This bio does add detail to those moments but it’s not enough. Yes, it is interesting that Connolly was set to interview Lennon a day or two after the murder but only for a moment.

At this point—more than 50 years since the boys appeared on The Ed Sullivan Show—the best books about the Beatles come from interesting analyses like Dreaming the Beatles by Rob Sheffield or straight up fiction. The best of the recent fiction about Lennon in particular comes from Tom Barbash who wrote the recently published The Dakota Winters that tells the story of a family who lived in The Dakota apartments in the months leading up to Lennon’s murder. An earlier novel titled Get Back, Imagine Saving John Lennon by Donovan Day also had its fun moments.

This is not to say that Connolly’s book is anything less than comprehensive. It is but, in writing about Lennon’s life, it’s not enough to go through all the obvious signposts. Lennon was an amazing songwriter and singer, probably an average musician, but his legend needs a breather. We loved him but his life story may be as played out as the 10,000th playing of “Lucy in the Sky with Diamonds.”

Sometimes, one needs to listen to new music and find fresh legends.