Behind the Red Door: A Novel 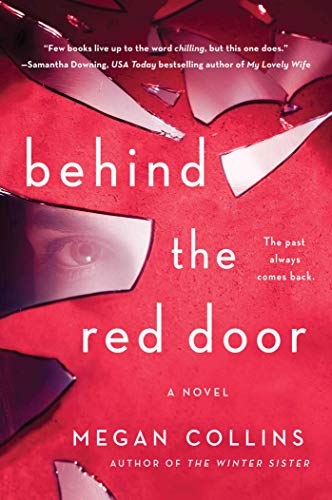 “Behind the Red Door by Megan Collins is a chilling psychological drama as disturbing as it is mysterious.”

Is it possible to recognize someone and not remember them at the same time? What contributes to our sense of safety in the world? How reliable are memories, and why do we block them?

Behind the Red Door by Megan Collins is a chilling psychological drama as disturbing as it is mysterious.

Disturbing because we have all been children. Each of us has trusted what we learn in the embrace of our childhood. We have all evolved out of the cocoon of blissful dependency into a person who suddenly “gets it,” who can see the world in new and significant detail. Fern Douglas is that child, involved in a defining incident when she was on the cusp of being a teenager.

A woman named Astrid Sullivan has been kidnapped again 20 years after she was first abducted and released in a small New Hampshire town. When Fern sees the television news of this event, she recognizes a freckle under the woman’s eyebrow, and realizes she has seen this person before: How can this be and why can’t she remember?

Not your usual suspect, Fern carries a backpack of anxiety around every corner; her father is a career scientist who has strayed from the mainstream with his unorthodox methods of studying fear. Fern’s childhood was filled with these fear traps her father set for her as part of his experiments. And Fern, a grown woman in a healthy, loving relationship and trying to get pregnant, in her mid-thirties, is still trying to please him. She never quite heard the “I love you” from her father because he was always so addicted to his work, tap-tap-tapping on his typewriter in his study, or setting up false terror episodes to scare her, then debriefing with her afterwards so he could “study” her fear.

After seeing the freckle and sensing familiarity, Fern dreams in high-def: images that haunt her during the day as she tries to help her father pack to move to Florida. Meanwhile, Astrid Sullivan has written a book about the kidnapping 20 years ago, and it has been released, close on the heels of her second disappearance. When Fern reads Astrid’s account, she reluctantly identifies with a second person who was held against her will in the same basement: Astrid calls her “Lily.”

Fearing that the kidnapper may be looking for her, and she may be in danger herself, Fern presents herself to the police and declares herself as Lily, even as her memories of this trauma are still coming into focus. But, of course, Fern is not the first woman who has claimed to be Lily; the book is a bestseller and the second kidnapping has ramped up interest to a frenzy. Fern is roundly ejected from the police station; now she must solve this eerily familiar mystery herself. One by one, her memories and Astrid’s book begin to piece together a picture of her involvement with Astrid’s abduction 20 years ago. But why did Fern bury these memories? And who kidnapped them both? His figure is remembered in black: long gloves, a mask, waders; almost every inch of him covered and unrecognizable.

As she encounters people and places familiar to her as a preteen; as she pieces together the events of kidnapping and her proximity to these events, Fern becomes as unsettled as she is determined to find the truth. Who? Why? And will he strike again?

We meet Father Murphy with his claustrophobic lectures to Fern about her lost soul; he was there 20 years ago, minutes prior to Astrid’s abduction and is considered a reliable witness for the police. He repeats an acceptance of the events as punishment for Astrid’s wicked soul—as she was “caught” kissing another young woman. Cooper, a bully with a menacing tattoo who terrorized Fern as a young teen, reappears, wanting to purchase a house in the dark woods that could have been the site of their confinement; even Astrid’s parents, in the habit of lying to set up her father’s fear episodes, withholds information from 20 years ago. Everything preys at the edges of Fern’s sanity, filling her with doubt yet fuelling her resolve. The kidnapper is out there; the truth seems tantalizing and near.

And it’s a shattering truth.

Megan Collins has created a suspenseful novel that is ultimately haunting —it lingers, asking questions about our experience as human beings in relationship with others, about our expectations of ourselves and each other, responsibilities we take on, and the legacy of our actions.