A Beginner’s Guide to Murder 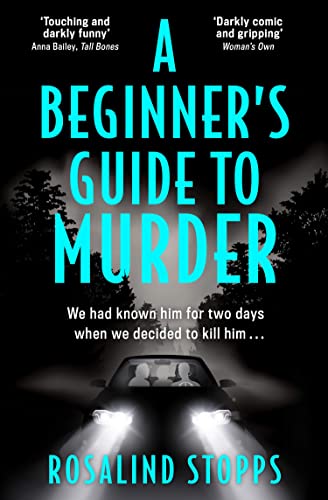 “A Beginner’s Guide to Murder is a humorous romp through unfamiliar territory. Stopps manages her four central characters through distinct portraits. The women share an important goal—championing the beauty of independence.”

Three retired women are relaxing at a local café after their Pilates session when a desperate young woman rushes in. She’s terrified—of what? She runs through the café and into the bathroom, leaving the trio wondering what she’s scared of. Moments later a mean-looking man charges in looking for his “daughter.” Meg, Daphne, and Grace don’t believe him for a minute. They instinctively bond together and claim they’ve seen no one.

Such is the setup for Rosalind Stopps’ recent A Beginner’s Guide to Murder. The women are discussing options when Nina emerges from the bathroom, lost and frightened. She thanks them for their kind concern, but before they can manage a civil conversation, the café owner throws them out because she doesn’t want any trouble.

The trio doesn’t want trouble, either. They retreat to Meg’s house since she lives the closest. But what to do? The women had set out that morning to exercise, not save a troubled soul. Before they can organize, the mean-looking man snatches Nina from their midst. At that point, the game is on.

Good sense would suggest that they walk away, but they feel instantly responsible for Nina, who is somehow a younger version of each of them. They want to defend her on principle: “We’re old women, what does anyone expect?” Grace asks. “We’ve got to do what we can, what’s right—do what we can to make the world a better place. Anyone would agree with us. I don’t think there’d be any argument. That poor girl.” The women realize that Nina’s pimp doesn’t have a single redeeming quality. The best solution? Kill him off. They have no idea how to do this, so they call in recruits. Meg’s neighbor, a former con, knows much more than they do. Soon they’re plotting to create a final solution, no matter how much it costs.

Stopps’ narration alternates between the three women and Nina, all of whom are sympathetic. Nina shares the backstory on how she was tricked into the sex trade, but the older women have skeletons of their own. For example, Meg has led a life of regrets: “I have dumpy grandma written all over me, which is odd as I’m not actually a grandma. I’m not really anything, a widow, I suppose, although that makes me sound like I had a marriage, which I hardly did.” She suffered her husband’s constant criticism and nagging, so she is extra sensitive to the effect even worse treatment has on Nina.

Throughout, Stopps presents vivid images. When we first meet the antagonist, he stands against the door in such a way that it’s clear “he was used to owning spaces wherever he went." The women distrust him immediately, perhaps because he reminds them of men in their pasts. As Meg puts it, “He looked like a toad, to be honest, like a toad that has accidentally been transformed into a man but is threatening to change back at any time. I suddenly remembered what the accent was. Poirot. He was Belgian, I was sure of it. A Belgian toad.” The character is believable and despicable at the same time.

The clearly delineated accomplices are interesting in their own ways. Since Meg suffered a repressive marriage, for example, the choices she makes in her quest to save Nina stem from a lifetime of wasted experiences. Grace, who’s Sri Lankan/British, has always felt like an outcast. She understands Nina’s feelings of isolation and the consequent lack of self-esteem. Daphne, from Jamaica, was so damaged from her upbringing that as an adult, she loved the consistency of going to work every day. Her routine is so precious to her that she only retires when her bosses finally realize she’s well past retirement age. Nina, too, becomes accustomed to a regimented daily routine.

As the story progresses, we delve further into the stories of all three women. The more we learn about them, the easier it is to understand why they attempt to save Nina without the help of any authorities. The women know without a doubt that the “toad man,” if ever sent to jail, would soon be right back on the streets, threatening the women under his control and finding even more victims.

Stopps’ book doesn’t read as a manual. The older women have too many doubts and false starts to pass along any advice, but they do offer a humorous way to go about solving a community problem. Meanwhile, the readers enjoy riding along.

Certainly the women make poor choices in attempting to right some of the wrongs committed against Nina, but Nina herself is symbolic of each of the women. The story isn’t about murder but rather the pain of lost opportunities. While the women’s regrets of their ruined pasts never fade, they learn that by bonding together and making themselves vulnerable, they overcome aspects of the past that have held them back—and might be holding the reader back as well.

A Beginner’s Guide to Murder is a humorous romp through unfamiliar territory. Stopps manages her four central characters through distinct portraits. The women share an important goal—championing the beauty of independence. Do they bend some rules? Yes. Do they back down? They do not. Neither should their readers.