Beg, Steal and Borrow: Artists Against Originality (An Elephant Book) 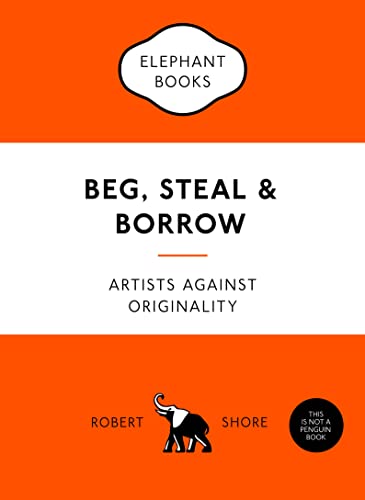 “as our fore-artists set the example, so shall we copy.”

What is art? Is it a measure of originality? A quality of perfection in copies of other artists? A designation or label not previously attributed to an object? A little of this, a little of that? A je ne sais quoi aura? A new idea? Perhaps an old idea re-re-re-morphed?

Into the pile of confusion of the age-old and endless debates generated by artists, critics, and art historians, Shore tosses his own take. Using humor, irony, and smart word choices, Beg, Steal and Borrow touches on some of the complexities behind Modern Art and the modern definition of artistic creativity. Shore himself steals from others as he presents his thoughtful commentaries.

In his own words, Beg, Steal and Borrow asks the question, “Are we less original than our predecessors, unable to summon works ex nihilo—out of nothing—as ‘real artists’ used to?”

However, this is not quite the answer he covers. After making a wet-blanket generalization to the effect that no one since Adam and Eve could even hope for creating something truly original, he quickly concludes that originality in art was never an intention and this question is moot.

Then, if not originality, is artistic merit to be assessed based on the choices the artist makes in terms of copied influences? With this, the book’s focus tilts more to the artistic tradition of copying. It is, in a vague sense, about (also using Shore’s words), “creative borrowing from Roman times to the Digital Age, with the emphasis on the present.” However, this too is not quite the answer he covers. This, after all, is common knowledge.

What is presented instead is how artists have approached the murky and very blurry lines between downright plagiarism versus imitation versus appropriation of their sources. Shore is actually presenting two sides of a conundrum between which most artists balance: honoring their predecessors’ creative works (upon which their own work is based), and the need to assume something of the credit for, as well as protect something of the ownership of, their new creative versions (which they anticipate will lead to rights and proceeds). In other words, when does a copy become an original and when is an original a copy?

Shore spends the majority of page space on court cases, legalities, and precedents to copyright issues, citing examples from as far back as Albrecht Dürer vs Marcantonio Raimondi in 1506. He traces the lineage of legal protection from a simple signature monogram to engravings (the earliest reproductive technology) to printings, to the idea of artistic copyright, to the “fair use” defense in many a modern day lay suit.  While it may well be that the best honor an artist can receive is to have their works inspire others, no one wants their work stolen, mocked, defamed, or otherwise tampered.

In our modern Internet era, where images are constantly downloaded, cut, pasted, collaged, satired, and taken out of context, copyright laws have yet to keep pace and the legal waters are murky and blurry once again. But as in the 1500s when the existence of engravings were critical to the proliferation of Renaissance art and ideas, today no one in their right mind wants to block access to the Internet. The question of how to proceed with digital artistic rights is yet unanswered. In all likelihood the resolution with be unoriginal, taking baby steps on a case-by-case basis, as our fore-artists set the example, so shall we copy.