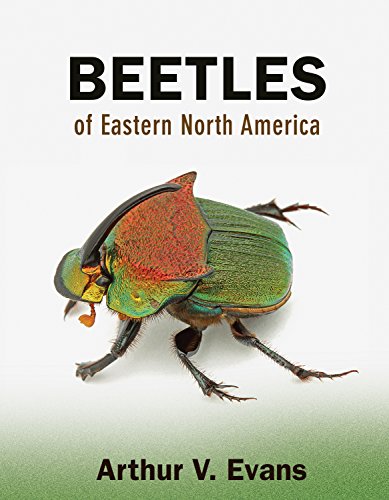 “Beetle-maniacs” will adore this beautifully illustrated, comprehensive volume written by the renowned entomologist Arthur Evans. Those who don’t realize beetles are such a fascinating topic will be happily surprised.

The world of beetles is diverse, and the book is rich with unexpected and engaging information. For example, we learn that beetles “talk” to each other, both to connect for mating, but also in some cases to communicate with their young.

For example, shiny black bess beetles (family Passalidae), which are valued as an important part of the ecosystem because they feed on rotting logs and stumps, look after their helpless young and communicate with them.  Evans describes how it happens,

“Adult bess beetles stridulate to communicate with their larvae. Using a pair of rasplike, oval patches . . . , bess beetles raise their abdomen slightly to rub these patches against hardened folds on their membranous flight wings to produce a clearly audible squeaking noise. At least 14 different signals have been documented in this species that are associated with various behaviors, including aggression, courtship, or responses to threats and other disturbances. The larvae respond to stridulating adults by rapidly vibrating their stumpy, pawlike hind legs over a ribbed area at the base of the second pair of legs. Their incessant squeaking is feeble in comparison to that of the adults but still perceptible to the human ear.”

Death-watch beetles get their name because they strike their heads against their mate’s body segment next to the head, called the pronotum. This action produces a series of audible clicks often heard during hushed, deathbed vigils. One might also say that their wood gnawing causes the “death” of fine furniture as well as wooden beams and flooring, earning them the other common name, furniture beetle (Anobium punctatum).

In the same family are the cigarette beetles and drugstore beetles, which cause, “considerable economic damage by infesting drugs, tobacco, seeds, spices, cereals, and leather.” A common pest in homes as well as commercial food processing centers, both the adults and larvae feed on dried plant and animal materials. They even have the audacity to consume museum specimens.

Gardeners know that lady beetles—or ladybugs—are one of the most beneficial insects for gardens. Some feed on molds, fungi, and pollen, but most also prey on plant pests, including aphids, scale, mealybugs, and even mites.

Serious gardeners order ladybugs to release in their garden for pest control, hoping they won’t “fly away home,” which is a possibility if the ladybugs are shipped at the end of their hibernation cycle when they are waking up and programed to disperse. More effective than importing ladybugs is to grow plants that attract them. They particularly enjoy the pollen from dill, fennel, marigolds, cosmos, chives, sweet alyssum, and yarrow.

The scarab beetle family is a mixed bag when it comes to pest versus boon. Some are important recyclers and pollinators; others, such as the beautifully iridescent Japanese beetle, are pests both in the adult form when they feast more than 300 species of plants, consuming leaves, flowers, and fruits, and as larvae when they attack turf roots as well as the roots of ornamental plants and vegetables. Likewise, the green June beetle adult feasts on leaves, sap, and ripening, soft-skinned fruit such as blackberries.

This richly illustrated volume covers 1,406 species in all 115 families found east of the Mississippi River, and features more than 1,500 stunning color images from top photographers. These photographs are invaluable in identifying a beetle, while the accompanying text gives a brief description of the insect as well as information on its eating habits and where it’s normally found.

The book opens with an introduction to beetles, covering basic anatomy as well as a gripping description summarizing their behaviors and natural history. In this section, you’ll learn about their mating habits, how they care for their young—or don’t, metamorphosis, defense mechanisms, food preferences, and where to find beetles.

Another section focuses on photographing beetles with a particular emphasis on macro photography. Also useful for the beetle aficionado is the discussion on how to collect and preserve them. And if you fancy beetle pets, you can read about how to keep and raise beetles in captivity. The introduction to each beetle family is highly engaging, featuring fascinating tidbits about their habits and habitat.