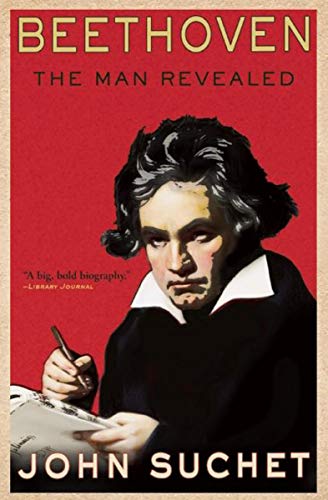 “. . . if you’re interested in understanding Beethoven’s music in depth, you’ll have to look elsewhere. Beethoven, warts and all, is what this book is all about.”

The greatest composer in the world came from a family of alcoholics, although to be fair maybe everybody in the late 18th century was an alcoholic. His forebears certainly were, and he had the scars from an abusive father and unsettled family relationships to show for it.

He looked like a slob. He didn’t know how to buy or wear clothes. He changed his address in Vienna perhaps as many as 30 times, sometimes after having been thrown out by his landlord and sometimes just because he couldn’t sit still very long. Wherever he lived, he lived like the Peanuts character Pigpen, with his home resembling a modern college dorm room. Clothing everywhere, half-eaten food in various places. Trade unemptied chamber pots for empty pizza boxes and his habitat would look like any American fraternity house.

He had no clue when it came to the opposite sex, throwing himself at various women who typically paid his attentions little attention. He went through life repeatedly rejected, appearing to have found even a measure of happiness with the mysteriously titled “Immortal Beloved” for a few brief moments late in life.

He was a mess with money, too. Beethoven, who was revered as the greatest composer alive, frequently lacked ready cash and was often mistaken for a vagrant or a homeless person because of the way he dressed and carried himself in public. He lacked negotiating prowess and instead only achieved financial security when a trio of Viennese noblemen agreed to pay him a large sum of money just to remain in the city. They died one by one, leaving Beethoven to the mercy of the courts to collect on money he believed still due him. He made almost as many trips to the courthouse as he did to the concert hall.

Above all, Beethoven was indeed deaf from a fairly early age. His deafness frustrated him, limited his social mobility, and interfered with his ability to conduct his own work. Most people are familiar with the story of Beethoven conducting at a concert of his own work, losing track of the time, and finishing after the orchestra. Suchet reveals that another man actually ascended the podium with him and did the real conducting, leaving Beethoven as the only man in the building who didn’t know that he wasn’t in charge. It’s a heartbreaking story, even more so with the addition of this actual conductor, because it indicates that the audience was in on the truth from the beginning of the concert.

And yet despite all this Beethoven was able to create music at a higher level than any other human being before or since. Suchet is much more interested in the story of the human being than looking at his work from the perspective of a musicologist. So if you’re interested in understanding Beethoven’s music in depth, you’ll have to look elsewhere. Beethoven, warts and all, is what this book is all about.

In some ways, the facts and events Suchet pulls together are so disturbing that one would rather not know these things. It’s hard to listen to Beethoven the same way after having read this book. Suchet presents a Beethoven who is troubled, mean-spirited, manipulative, obtuse, and a bit of a drunk himself. Suchet speculates, as have other authors before him, that Beethoven’s death was due to cirrhosis of the liver.

It’s quite possible that every fact in the book is accurate, although Suchet definitely indulges in a level of conjecture at odds with our modern, fact-based way of looking at the world.

One regret about the book is that Suchet seems to take an unseemly delight in revealing the great man’s many weaknesses and character flaws. The kind words he offers about the music itself don’t really make up for the general thrashing that Beethoven receives in the course of the book.

We want to know the greatest people in the world were, if not great people, at least good people. It’s hard to see Suchet’s Beethoven as anything other than a troubled man who happened to be the most gifted and talented musician of his or any era. Maybe that’s what’s missing from the book: a sense of compassion instead of the TMZ-like delight in revealing Beethoven’s innumerable weaknesses.

If you’d like to see the character of the west’s greatest composer trashed and beaten into the ground, you’ll love this book. Otherwise skip it, just put on one of the late quartets, and feel gratitude for the fact that despite the many difficulties Beethoven encountered in his lifetime, he still gave the world some of its greatest music.