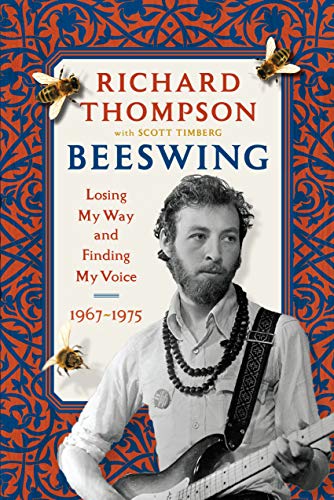 It’s not surprising that the jacket blurb compares this new memoir to Patti Smith’s Just Kids. Besides being a terrific book, that one sold really well. There are superficial similarities, in that both look at brief periods (in Thompson’s case, 1967 to 1975) when they were starting what turned out to be long careers. They were impossibly young! But Smith is much more inner directed than Thompson—in touch with her feelings, to use the New Age coinage.

Evidently an earlier draft of Beeswing was more impressionistic—the publisher pushed for more of a chronological take. It was probably the right call, because the book is very readable. Thompson writes exceptionally well, in a droll, understated, very British way. If he doesn’t fully communicate the depths of his heart, well, okay, it’s a tradeoff for a window into an important period—the birth of British folk-rock.

Early on, Thompson’s group Fairport Convention was enthralled with west coast rock and American singer-songwriters. Their first album, not their best, and some BBC recordings reflects those influences.

But after that Fairport—including singer Sandy Denny and co-founder/bassist Ashley Hutchings—were increasingly drawn to indigenous UK sources, often ballads that were hundreds of years old. Plugging them in—most memorably on masterpiece Liege & Lief from 1969—was controversial in Britain then. The leftist folk purists such as Ewan MacColl controlled the clubs and wanted their folk singers working-class and often unaccompanied—even an acoustic guitar was suspect.

Thompson mentions this, but a longer take would have been welcome. In many ways, Beeswing is like a working diary—have guitar, will travel. He has omnivorous musical tastes and soaked up so many influences he eventually produced a show and album called 1,000 Years of Popular Music—Gregorian chants to Brittney Spears. His first solo album, Henry the Human Fly, is an eccentric’s masterpiece, a mad mash-up of styles with its deeply British roots showing, released to “universal indifference.”

Thompson’s musical evolution is treated well here. His guitar talent was recognized early, and he became a journeyman session player—maybe a little bit later than Led Zeppelin’s Jimmy Page in the same studios.

Maybe because he was enthralled by music in all its forms he avoided some of the worst excesses of the period. There are a few mild stories about drunken nights, but the wild psychedelics and lurid nights with packs of groupies are in someone else’s book.

Also here is the evolution of Richard Thompson, songwriter. One reason the Fairport center couldn’t hold was that both Denny and Thompson were producing songs that begged to be recorded, which took them away from the traditional focus of Hutchings, who soon left to found Steeleye Span. That, and a horrific car accident that killed both the band’s drummer and Thompson’s American girlfriend. The latter is rather given short shrift—which Thompson explains away by saying he didn’t really know her all that well. Not much kiss-and-tell in these pages.

Thompson met Linda Peters, as she was then in 1969, and they married and recorded a series of peerless albums as Richard and Linda Thompson. They started out in the folk clubs, and gradually became more mainstream, helped along by voices that paired well and a string of indelible Thompson compositions. This evolution is expertly chronicled, as is the guitarist’s growing devotion to Sufism. Less explored is the couple’s acrimonious parting, a wound that took many years to heal.

What is in these pages outweighs what isn’t. If you love music in all its myriad forms, as Thompson does, you’ll love this book. It’s better at song creation (and evolution in the studio) than most memoirs, and it’s hugely informative about the time and the place. Yes, the whole thing is understated, but Thompson still tells a fine old story—and the book is full of good crack, as the Irish say.