Bed-Stuy Is Burning: A Novel 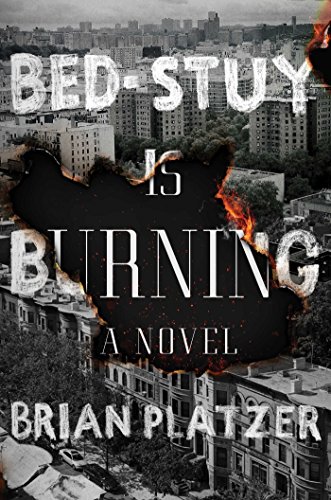 Novelists are not immune to what’s going on around them and clearly author Brian Platzer, who lives in the largely black and gentrifying Brooklyn neighborhood of Bedford-Stuyvesant, has drawn on his own life in his first novel.

At the center, there is a white couple—Aaron and Amelia—with a baby living in a black neighborhood or, perhaps more accurately, as Amelia feels, they are invading the black neighborhood with their own privilege and money. This is well-trod ground if you live in virtually any large city but novelist Platzer attacks it as though it’s a revelation.

Protagonist Aaron is a former rabbi who lost his job because of his addictive gambling. He stole/borrowed the temple’s funds to place a large bet, won, and returned the money the next day but the head rabbi doesn’t much care. Win, lose or draw, it’s the stealing/borrowing of the funds that earns Aaron the ax.

But don’t feel too badly for Aaron. He’s got a talent for making money and becomes a financial guy. His wife Amelia is a celebrity journalist who desperately wants to stop writing what is her bread and butter: fawning profiles of celebrities. She aspires to greater things. She wants to write about the gentrification and inequality of her neighborhood.

She gets her chance one explosive day when the local populace riots and invades her brownstone. For various reasons, the police are absent and things get progressively worse. This is the beginning of the fatal flaws throughout this novel.

As everyone knows, fiction must be believable. The idea that the entire New York City police force—35,000 officers strong—would not have enough resources to protect its citizens in brownstone Brooklyn against a home invasion that goes on for hours is ludicrous.

Not to mention that gunshots are fired inside that house and a man is left lying dead in the doorway. Another is dead outside. Still, no police.

Instead, we’re expected to believe that Aaron can calm down the angry mob outside his house by quoting Bible passages!

If you can abide this fantasy, maybe the insulting plot devices to come won’t bother you either. In Platzer’s book—no matter his supposedly heightened sensitivity—nary a white person is injured but two black men are shot to death. Someone needs to be sacrificed for all this violence.

On top of that, Amelia buys her way out of trouble by handing a poor black teenage girl a check for $50,000. When she has trouble cashing the check, Aaron comes to the rescue—he gives the teenage girl $130,000 in cash. Blood money for his bad conscience you see.

The teenage girl’s life becomes fodder for Amelia who achieves her dream of becoming a crusading journalist. She uses the girl’s life to highlight the inequality of Bed-Stuy and turns it into a book. The girl eventually writes her own piece for the New York Post letting the world know that Amelia paid her source, a gigantic journalism no-no.

Aaron shrugs it off, telling Amelia not to mind those yellow journalists. They can’t touch her. And Amelia’s agent is positively ecstatic because Amelia’s book is about to hit the bookshelves.

It’s as though social media doesn’t exist. No one will see that Post article, the once and future rabbi proclaims to his wife. “The New York Post,” he [Aaron] said, “won’t be enough to tarnish the reputation you’ve built over this last year and a half.”

Wanna bet? If that dialogue sounds wooden, you’re in for a bunch more. Just listen to the character of Police Commissioner Bill Bratton who is nowhere near as articulate or intelligent as the real Bill Bratton. Or how about when Amelia lectures the Police Commissioner in front of a roomful of cops and journalists? It’s truly cringe-worthy.

The setup of this novel is interesting, but the plotting falls apart, and we’re left with a polemic about the dangers of gentrification. Yeah, we know.