Becoming Ronald Reagan: The Rise of a Conservative Icon 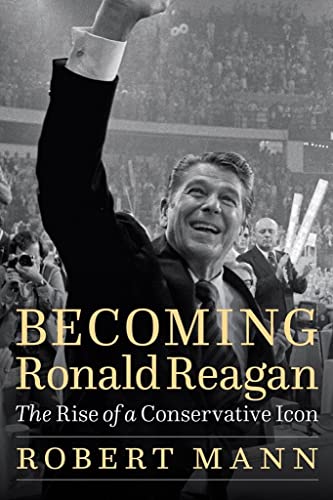 “[Mann’s] book portrays Reagan as a skilled and sophisticated political thinker and leader.”

Most journalists, professors, and intellectuals think they are a lot smarter than Ronald Reagan was. Robert Mann, a professor at Louisiana State University, used to think that, too, until he wrote this new biography of the 40th president.

Mann’s research into Reagan’s ideological and political development from the early 1950s to the mid-1960s disabused him of the notion that Reagan was “an incurious, befuddled man who relied on a team of speechwriters to tell him what to believe and say.” While Mann disagrees with most of Reagan’s political views, his book portrays Reagan as a skilled and sophisticated political thinker and leader.

Mann, of course, is not the first writer to discover that there was more to Reagan than a likeable, smooth-talking actor-turned-politician who was once caricatured by a Washington sophisticate as an “amiable dunce.”

Kiron Skinner, Martin and Annelise Anderson, Paul Kengor, Peter Schweizer, John Patrick Diggins, and most recently Larry Schweikart, among others, have demonstrated beyond any doubt that Reagan was a well-read, thoughtful, principled but pragmatic leader.

Mann set out to write a book about Reagan’s famous televised speech on behalf of Barry Goldwater’s presidential campaign in 1964, but soon realized that the roots of Reagan’s ideological and political transformation go back at least to the early 1950s, if not earlier.

Some biographers pinpoint the beginning of Reagan’s ideological and political odyssey from liberal to conservative at his role in combatting the efforts of communists to infiltrate and control Hollywood in the late 1940s. Reagan was then head of the Screen Actors Guild, an actors’ union targeted by the communists. He later testified as a friendly witness before the House Un-American Activities Committee (HUAC).

By that time, Mann notes, Reagan was what we now call a political junkie, voraciously reading books, articles, and columns about important political issues, and engaging in lengthy political debates and discussions with fellow actors. His friends in Hollywood recalled his remarkable memory and his persuasive speaking ability.

Mann notes that when Reagan’s first marriage to actress Jayne Wyman ended in divorce and his movie career began to slow down, he “poured himself into his political interests.” He publicly supported Harry Truman for president in 1948 and other liberal Democrats in congressional races. He even backed Helen Gahagan Douglas in her Senate race against Richard Nixon in 1950.

Reagan also began to speak out more and more on the communist threat. Mann notes that Reagan was not only developing an increasingly conservative worldview, but was also honing to near perfection his delivery of speeches.

Reagan described America as more of an idea than a place—“the idea of the dignity of man, the idea that deep within the heart of each one of us is something so God-like and precious that no individual or group has a right to impose his or its will upon the people, that no group can decide for the people what is good for the people so well as they can decide for themselves.”

He called America the “promised land” where all are welcome to come and “strive for freedom” and a better life for themselves and their children. It is a land, Reagan said, that God watches over. Mann notes that as part of the speech Reagan told stories—not always faithful to the facts—that resonated with his audience. He exuded sincerity, earnestness, and credibility.

Reagan further honed his speaking skills when he became a spokesman for General Electric (GE), and starred in its television program General Electric Theater. Mann believes that Reagan as spokesman—traveling to GE plants around the country and speaking directly to GE employees—enhanced his speechmaking and political skills. This was the perfect training ground for politics.

Mann notes that on long train trips to GE plants around the country, Reagan “would devour newspapers, news magazines, and other material . . . [that] influenced and sharpened [his] political views” in a conservative direction. He was a “voracious reader,” Mann writes, who studied Henry Hazlitt’s books on economics, and who read Whittaker Chambers’ anti-communist book Witness. He also became an early reader of William F. Buckley, Jr.’s new magazine National Review.

Reagan’s years at GE also reinforced his ideological shift to the Right. He was a spokesman for corporate America who lauded the free enterprise system and criticized America’s growing tax burden. He increasingly saw “big government” as a danger to America’s wealth and freedom.

Mann notes that few of Reagan’s speeches in the 1950s are available to researchers, so he used newspaper stories about those speeches to fill in those gaps and gauge public and press reaction to the speeches. In many of those speeches, Mann writes, “Reagan told the same stories about communism in Hollywood, government waste and abuse, and encroaching federal control . . .”

By the late 1950s-early 1960s, writes Mann, Reagan “had become a dynamic, conservative voice in his own right as he crisscrossed the country warning about Communism and the unchecked growth of big government.” These were themes that set the stage for “The Speech” in 1964.

It was that 30-minute televised speech for Goldwater’s presidential campaign that launched Reagan on the road first to the California governorship and later the White House. The themes of the speech were the same ones Reagan had been talking about for years—the communist threat abroad and the big government threat at home.

He ended the speech in dramatic fashion: “You and I have a rendezvous with destiny. We’ll preserve for our children this, last best hope of man on earth, or we’ll sentence them to take the last step into a thousand years of darkness.”

Many in the GOP, after Goldwater lost big to Democrat Lyndon Johnson, wondered aloud if Reagan should have been their standard-bearer. Two years later, Reagan upset incumbent California Governor Edmund Brown.

After two terms as California Governor, Reagan challenged President Ford for the GOP nomination in 1976 and lost by a small margin. After Ford delivered his acceptance speech at the GOP convention, he called Reagan to the stage to address the delegates.

It was yet another brilliant speech. “Reagan spoke every word from memory,” Mann writes. “He never broke eye contact with delegates. The passion and emotion of his earnest words, his perfect timing, and his supreme self-assurance before one of the largest crowds of his career” led many delegates to believe they had, like 1964, nominated the wrong man.

Four years later, Reagan won the presidency in a landslide victory over Jimmy Carter. He won reelection by one of the largest margins in presidential election history. By the end of Reagan’s two terms as president, the Soviet Union was on the verge of collapse and America’s economy was humming. Liberal historian John Patrick Diggins wrote that Reagan was one of the three great liberating presidents in U.S. history (Lincoln and FDR being the other two).

Mann would probably not agree with Diggins, though his book is not about Reagan’s presidency. “History,” Mann writes, “has proved him wrong on many fronts.” Mann believes Reagan was too eager to confront the Soviet Union militarily, wrong about the danger of big government, neglected the AIDS crisis in the 1980s, and did little to advance the cause of civil rights.

Mann’s political disagreements with Reagan, however, do not diminish Mann’s admiration for Reagan’s political skills and achievements, and his obvious love of country. That is no small thing for a liberal professor to admit.