Becoming Michelangelo: Apprenticing to the Master, and Discovering the Artist through His Drawings 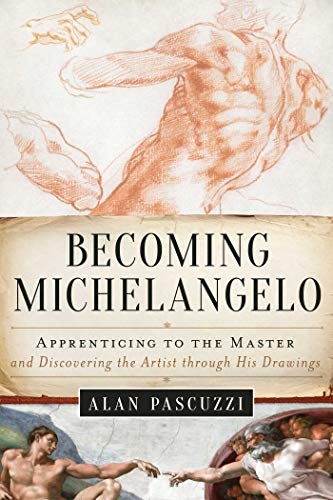 "Becoming Michelangelo successfully tells of an epic story of an artist through the experiences of the author/artist . . ."

Alan Pascuzzi promises Becoming Michelangelo " is for anyone who loves Michelangelo's art and is moved by his genius," "an artist's study of an artist." The author explores "the most practical side of his art—his drawings" to "offer a way for the nonacademic reader to get inside his artistry and his life."

Such ambition has challenges. Hundreds of books, including "dozens of biographies" and Irving Stone's "brilliantly written novel" The Agony and the Ecstasy have appeared about Michelangelo, over more than five centuries. "There are four volumes of just the lists of books and articles written about him."

"We see Michelangelo as the artist who was so talented he could not possibly have been human." Pascuzzi, however, discovered that the great master "had to learn to be an artist," "that he was in fact no different than other young boys . . . whose attraction to art led to an apprenticeship."

Michelangelo's father sent him to school to study to become a prestigious notary. He apprenticed under Domenico Ghirlandaio "a brilliant draftsman and an accomplished fresco artist" and Bertoldo di Giovanni, "a master sculptor." His renowned patron Lorenzo the Magnificent "gave him the Neoplatonic education that formed the basis for the rest of his brilliant artistic career."

The great artist, however, pictured himself in the semi-autobiography, Ascanio Condivi's Life of Michelangelo, as "self-driven in his independent artistic studies," influenced only by nature and his boyhood friend Francesco Granacci. Unlike so many other historical figures, we have dueling biographies and documentation to give us something more, even if dark or conflicted, of the real person as human.

"Very few drawings from Michelangelo's apprenticeship—roughly from 1485 to 1488—survive" (age 10 to 13) but some do exist, so many of his drawings overall unintentionally give credence to the notorious forgeries of Eric Hebborn. Pascuzzi believes, however, that "it seems likely that Michelangelo destroyed anything that would have revealed the 'human' struggle throughout his career."

Pascuzzi also writes of himself, that "becoming a master—in the traditional Renaissance art sense of the word—had always been my goal." Becoming Michelangelo is a memoir of Pascuzzi's personal discovery through understanding the great artist.

Pascuzzi: "I wanted Michelangelo as my master." The author concludes with five of Michelangelo's works that "demonstrate the gradual evolution of his techniques, knowledge of anatomy, and creative genius." The great master never stopped evolving because "Michelangelo drew and drew."

Drawings help in special ways. "To view up close a drawing that was held by the master himself puts you in almost direct contact with him." Drawings can document the development of an artist and the person's thinking, as shown in comparing Michelangelo's drawings to his statue of David.

"You can also see scribbles, writings, and mistakes that make a person from centuries past come alive right in front of you." "With the advent of cheap and available paper, they could make multiple drawings to figure out new solutions."

"Any commission," even for sculpture, required "the artist to execute numerous drawings." "Though the Leonardo and Michelangelo battle frescoes [for the Palazzo Vecchio] were never finished," for example, "both artists executed hundreds of studies and preparatory cartoons and some have survived."

Problems exist, however, beyond the drawings surviving. Pascuzzi copied Michelangelo's drawings as the master had done. The author concludes, however, "I was unable to copy this drawing successfully and capture Michelangelo's spirit in it." Days before his death, Michelangelo "gathered dozens of his studies and cartoons amassed over a lifetime . . . and set them on fire."

Problems exist beyond availability of drawings. The budding artist had to learn techniques, obtain the right pens, develop inks, use chalk, and obtain human models—excellent practice for future work in brushes, oils, and painting. Pascuzzi teaches his students how to do the same.

Although Becoming Michelangelo explores background and technical matters, it never completely leaves out the great artist. The author writes, for example, "the general eagerness to envision a conflict between these exceptional artists [Michelangelo and Leonardo] may have caused historians to overlook clear evidence for the connections between them."

Well-illustrated, Becoming Michelangelo successfully tells of an epic story of an artist through the experiences of the author/artist. The greater message comes that the master, contrary to Michelangelo's views, always remains a form of apprentice: "It was now up to me to discover a mastery of my own."