Becoming a Londoner: A Diary 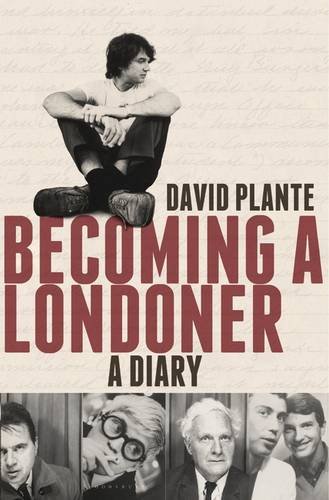 Readers already familiar with David Plante’s elegant prose and with his previous work The Pure Lover will already know the name Nikos Stangos, Mr. Plante’s partner for more than 40 years, as The Pure Lover was created as a paean to Stangos as well as an examination of loss and the resultant staggering grief:

“I lay in our bed, in which lovemaking tangled us in sheets and bound us, and where, bound, we fell asleep, as if the bed were our final resting place. And here you died, here where I lay wide awake, and, restless, thought I must throw out this creaking bed, and, too, the pillows and the blankets and the sheets.”

David Plante’s new work Becoming a Londoner is a worthy companion to The Pure Lover as it allows the reader access to their lives together, and through the eyes of the young Mr. Plante (by way of the diary entries that make up the bulk of the book), grants witness to the vibrant literary world of London in the 60s, 70s and 80s.

Where The Pure Lover thematically begs comparison to Joan Didion’s The Year of Magical Thinking (and bears the comparison well, as Mr. Plante is easily Didion’s equal both in his unflinching willingness to examine the mechanics of loss and in his exquisite, poetic turns of phrase), Londoner most easily echoes Christopher Isherwood’s recently completed multi-volume published journals.

Both are, after all, the observations of displaced authors—Isherwood moved to Los Angeles from London during World War II, Mr. Plante moved from New York City to London in 1965—each of whom entered into a long-term relationship with a citizen of their new land—Mr. Plante with book publisher Stangos, Isherwood with painter Don Bachardy.

In the hands of a true writer, a diary can be a miraculous thing.

“Stephen knocked on Forster’s door and a delicate voice said come in. He, short and bent, was in his shirtsleeves. ‘I’ve just seen the doctor,’ he said, ‘I’ve just seen the doctor.’ ‘Are you well?’ Stephen asked. ‘Oh, indeed, indeed.’ Stephen introduced us, and when I shook his hand I imagined shaking hands, as if all their handshakes remained like hundreds of invisible hands about his, with Virginia Woolf, with Maynard Keyes, with Lytton Strachey, with all of Bloomsbury—and, extending even more out into the world, with Constantine Cavafy in Alexandria. He went into his bedroom to put on his jacket and on the way out shut the door of his bathroom, where I saw a long, claw-footed Victorian tub that listed.”

Londoner is populated by the great and the legendary from W. H. Auden, who shows up for a restaurant lunch and a stroll in his iconic footwear (“We walked along the Strand to Simpson’s, Auden’s old slippers flopping. Stephen and I were giggling, Auden very matter-of-fact.”); to Sonia Orwell and Germaine Greer (both of whom would be among those portrayed in David Plante’s memoir Difficult Women); to Lady Ottoline Morrell, who seems to flit from memoir to memoir the way other notables do cocktail parties and celebrity balls.

While Spender acted as a confidant and mentor of sorts to Mr. Plante, Orwell was a close friend. Yet Auden looms larger and in his cameo appearances steals the show. He wears his character flaws as openly as his deep wrinkles. As here, in this sad, telling moment:

“Auden said something disparaging about Samuel Beckett getting the Nobel Prize for Literature. Nikos said, ‘Who else is there?’ Auden shook his head so all the sagging wrinkles shook and said, ‘There’s me.’”

“Still, Auden is a very great poet, any number of examples of his poems testament to his greatness. How moved I am every time I read ‘In Praise of Limestone’ for the intelligent lyricism of the flowing lines, as if the very lyrical intelligence of the poems is what makes it so very moving—and mysterious!”

The same, of course, may be said of Mr. Plante in his work, wherein the same lyrical intelligence is ever on display. In his Francouer Trilogy of novels, The Family, The Country, and The Woods, the works that established his literary reputation. In the haunting The Pure Lover and the down-and-dirty Difficult Women. And here, especially here.

While Becoming a Londoner may seem, on its surface to be an exploration of the relationship between Mr. Plante and Stangos, or an Uma, Oprah, Oprah, Uma experiment in name dropping (Phillip Roth, Clare Bloom, Francis Bacon, and David Hockney all get dropped—and, indeed, Hockney rather inexplicably is among those pictured on the cover although his involvement in these pages is slight), it is in the heart of it a rather delicate and beautiful exploration of Mr. Plante’s relationship with a man he never met. American novelist Henry James stalks these pages, as it was from him that Mr. Plante first learned of Literary London and it was through his eyes that he first experienced European culture.

And the evolution of the relationship between Mr. Plante and James illustrates and informs. He, James, acts first as touchstone, and later something of a wheezy pantaloon. The fact that Mr. Plante titled his first novel The Ghost of Henry James stands as testament of his rank in these diaries, and it is the entries dedicated to James that best display the author’s evolution, both as an author and a Londoner:

“More about Henry James. For so long, reading his novels in America, I imagined that his London was the true London, the London he not only accounted for in his novels but the London he dined out in, almost every evening of the year. I imagined he knew the lords and ladies, the dukes and duchesses, and, if princes and princesses, foreign ones (Italian) living in London. Certainly the London I am getting to know is not the London he knew, and his London, for so long, appeared to me the London that hovered above mine, and, up there, was inaccessible to me.

“But the more I live in London the more I look at the London of Henry James as a fantasy—his fantasy! His novels are fairytales!”

Becoming a Londoner may seem a simplistic, even a generic title, but it is an apt one as well. Every new friend, every new diary entry illustrates a revelation, large or small, that helps Mr. Plante further acclimate.

And at every party, across every luncheon table, around every corner, there is Nikos Stangos, attentive, waiting:

“It comes to me: Nikos and I live together as lovers, as everyone knows, and we seem to be accepted because it’s known that we are lovers.

“In fact, we are, according to the law, criminals in our making love with each other, but it is as if the laws don’t apply.

“It is as if all the conventions of sex and clothes and art and music and drink and drugs don’t apply here in London.”

Stangos and Mr. Plante (and Spender and Auden and Orwell and, especially, Lady Ottoline Morrell) lived in a loving place, magic place, a golden place, in a golden age—one in which the happenings of the day seemed to seldom intrude (only the Falkland Islands War manages to intrude into the ongoing conversation, and then only briefly). And so, for the reader, by the end of the diarist’s account, it is as much a myth as Henry James’ London. Because the London loved by any artist will inevitably be a fairytale for other, more jaundiced eyes.