Becoming Eve: My Journey from Ultra-Orthodox Rabbi to Transgender Woman 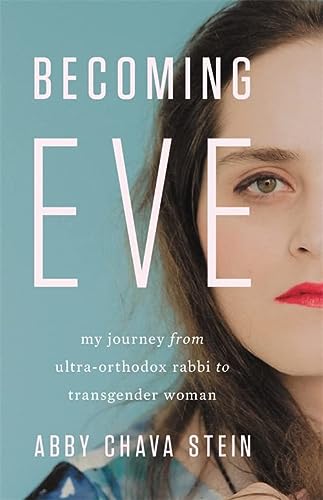 “‘As the wedding approached, I could not stop thinking that I should be the bride. I liked Fraidy, but I couldn’t help feeling that she deserved to marry a real man, and so did I.’”

One can only imagine the anguish experienced by Abby Chava Stein, who was forced to endure the first 20+ years of her life as a female trapped in the body of a male.

Having been born as heir apparent to a long dynasty of ultra-orthodox Hasidic rabbis descended directly from the Bal Shem Tov virtually eliminated any understanding or compassion from her parents for Stein’s struggles.

Abby Chava Stein was born Yisroel Avrom Ben Menachem Mendel in 1991 in Brooklyn, New York. Stein was one of 13 children.

One of the traditions for three-year old boys is called an upshern, where they are given their first haircuts. Stein recalled with horror begging to keep the curls that made her feel like a girl—like her sisters—at such an early age.

“My young, fragile feminine brain did what so many girls learn to do all around the world: behave according to the social norms forced upon us if we want to survive.”

To her mother’s horror, at four, Stein used to poke pins at her penis while taking a bath. She always wanted to be a girl, and private parts were never discussed in her culture. She tried to dress up in her mother’s and sisters’ clothing.

She learned to read written Yiddish at five, while most boys learned this by nine. Stein basically read whatever was made available to her considering anything other than religious works were discouraged.

Stein often rebelled throughout yeshiva—the community’s religious school—and had to change schools more than once, even though she was being groomed to be an esteemed rabbi, as the first-born “male” to the Stein family.

“I was a girl being raised as a boy, and I was going to have a Bar Mitzvah.” She began to have suicidal nightmares.

Questioning both her sex and religion throughout her education, “The trouble began a few weeks after I started school . . . by studying books I wasn’t supposed to study.” She soon began to believe she was an atheist.

One of Stein’s last schools was a yeshivah “in the (Catskill) mountains,” since she was banished far from local Brooklyn yeshivahs. There, during the rigorous Talmud and Jewish law studies that often lasted up to 20 hours a day, Stein befriended “Chesky,” a male student on whom she developed a crush. Both found a way to escape the campus for first, awkward sexual encounters to let off steam from so much studying.

By the time rabbinical yeshivah students are 18, marriage is recommended and is always arranged by matchmakers. Stein looked forward to marriage, but she truly wanted to be the bride and not the groom. Stein briefly met her fiancée—eye contact was not permitted—and didn’t have another option to meet her again until their wedding, a year later.

“As the wedding approached, I could not stop thinking that I should be the bride. I liked Fraidy, but I couldn’t help feeling that she deserved to marry a real man, and so did I.”

After four months of marriage, Fraidy—the bride—became pregnant and a son, Duvid, was born. Stein was not permitted to be with her wife during labor. Any possible sign of blood, or niddah, would render the couple off-limits to each other’s company. Stein immediately felt tremendous joy and love for Duvid.

Duvid’s ritual circumcision drove Stein off the deep end. The Internet was discouraged in the Hasidic community, but she began to research something she didn’t even know she was researching. She found an Israeli transgender forum. (Stein hadn’t learned English yet.) This opened new worlds for her.

On Yom Kippur, the religion’s holiest day, Stein violated two laws, by eating pork. Yom Kippur is a day of fasting and pork is not kosher. Stein found a site, Footsteps, which helps people adjust to leaving the Hasidic community.

At 24, she began her transition. While her family terminated contact, Abby Stein made hundreds of friends on social media who offered support and comfort.

Considering English is not Stein’s first language—Hasidic Yiddish is—Becoming Eve is a beautiful accounting of the community’s archaic religious traditions. Clear, logical, and replete with an insider’s info on living life as a boy who should be a girl within a suppressed, 18th century society in modern times, Stein triumphs.