Becoming Dr. Seuss: Theodor Geisel and the Making of an American Imagination 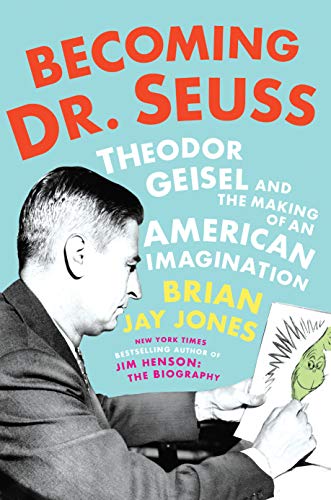 Who doesn’t know Dr. Seuss and his most famous children’s book titles, Green Eggs and Ham, and The Cat in the Hat? As it turns out, there is much more to the man than his string of 50 children’s book titles. No, they did not come in quick succession or with ease. Dr. Seuss’ book career stretched over five decades, including a stint in the army during World War II.

Dr. Seuss was not the angelic character one might imagine, sitting in a tower creating clever rhymes for tots. He did sit in a tower overlooking the Pacific Ocean, once he and his first wife Helen fell in love with La Jolla, CA, and decided to make the move from New York City. But Ted weaved his way there, first as an ad man for the likes of Flit bug spray and Esso Oil, then as a film maker in the army when he created Private SNAFU with Frank Capra, then back to children’s books to pay the bills.

A life of serendipity brought Dr. Seuss to the masses. In 1937, after Geisel had shopped his book, And to Think I Saw It on Mulberry Street, around the publishers of NYC, he received 27 rejections and was ready to take the manuscript home and burn it. That is what he said to his old Dartmouth college buddy, Mike McClintock, on the street. But that buddy was now a publisher at Vanguard Press, and the rest is history. Later, in the chronological telling of Geisel’s life it was surprising to find out that many of the Beginning Readers at Random House, that Geisel was in charge of procuring, were written by his old college buddies. Sometimes it really is who you know.

It is fascinating to find out the history of Random House, myself having owned Bennet Cerf’s Book of Laughs as a child. It was also Cerf’s doing that The Cat in the Hat came into existence. Cerf bet Geisel that he couldn’t write an easy reader and use only the 200 words on the reader’s list.

It took Geisel two years, but he finally got the idea for The Cat in the Hat. Cerf bet Geisel $50.00 that he couldn’t write an even easier reader using a list of only 50 words. Geisel won the bet with Green Eggs and Ham. That might have been the best $50 Benet Cerf ever spent, since Green Eggs and Ham is Dr. Seuss’ number-one selling book.

Much of the book discusses the politics of publishing, the politics of Hollywood, and the politics of marriage. Geisel‘s second wife came about when his first wife committed suicide, and his best friend’s wife left him to marry Geisel. If that weren’t enough to tarnish the Dr. Seuss image, there was also the misogynistic line in the first book (And to Think I Saw It on Mulberry Street).

There are racist illustrations done by Geisel in the twenties and thirties. Yes, everyone was drawing the same big lips and buggy eyes, but still.

Gesiel grew as a person and wrote some of his best stuff at the end of his 87 years. Oh, the Places You’ll Go! was his last effort. Even though Geisel never had any children of his own and may have called children brats in the early days, he did believe he was doing something positive for children everywhere by the time he was done.

A meticulous, sometimes difficult man, Geisel held tightly to the power granted him by the publisher. He had two books with Vanguard and all the rest with Random House. When he finished a manuscript, he and Helen would fly to New York to hand deliver the manuscript and even read it out loud to the Random House staff. Oh, to be a fly on the wall in those days!

Much of the depth of the chronology bogs down at times, but the book is as thorough as possible, filled with minute details and tons of quotations. Every Caldecott Honor, Academy Award ,and Pulitzer Prize is documented, in order. It would’ve been handy to see a chart at the end with the 50 books, year published, and awards won.

Becoming Dr. Seuss is worthy of a complete read, and at 496 pages, including a ton of footnotes and a handy index, it will also be a long one.