The Beauty of Living Twice 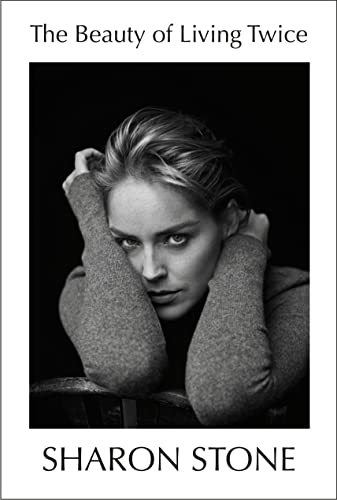 Just two weeks after 9/11, while awaiting treatment for what turned out to be a brain bleed—a stroke with less than one percent chance of survival—Sharon Stone had plenty of time to ponder. “After all, what was I? An actress? A fundraiser? Did I matter?”

Sharon Stone was born in 1958 to Dorothy and Joseph Stone, in Meadville, Pennsylvania. She was one of four siblings, so poor that they lived on hand-me-downs.

She was placed in second grade at the age of five. Precocious, she once brought a bat to school for show and tell. “Yes, I was odd, but not on purpose . . . Nor, I now realize, was I the only one.”

Stone was physically abused by her mom, who, in turn, was abused during the Depression by her own parents. But during summers, she was fortunate to live with her glamorous, Schiaparelli-clad paternal grandmother.

Said Stone of her parents, “They did a horrible, beautiful, awful, amazing job with us.” Her older brother, Mike, a Vietnam vet who was injured during the war, did time in Attica for a serious drug offense. They would also beat her.

At almost 18, Stone became pregnant and had to go to Ohio for an abortion. She knew virtually nothing about birth control, but after that literally bloody experience, she found a local Planned Parenthood in Pennsylvania, and was thereafter protected.

Throughout college she held jobs in a pool hall and waitressing at the local Holiday Inn. Stone left college and signed with the Eileen Ford Modeling Agency in New York. Her first movie was Woody Allen’s Stardust Memories.

She moved to Beverly Hills and took acting lessons. Her big break came with Basic Instinct, after 12 other actresses turned down the part.

In a critical flashback in this memoir, Stone sadly relates how she and her little sister were molested by their maternal grandfather. She tapped into this outrage for that Golden Globes-nominated role.

After her stroke, two weeks after 9/11, she had a “seven-hour surgery where (her) ruptured right vertebral artery was replaced by coils.” Recovery was truly challenging, but Stone had a young baby, Roan, whom she had adopted over a year before.

A few months later, she was dancing with John Travolta at the Oscars—after Quincy Jones referred her to a specialist for rehabilitation.

Stone assisted HIV/AIDS victims and studied women abuse victims on death row for killing a spouse, all for movie roles. She lived a day on death row researching this role and met a prisoner. “Well, it seems her husband had been pushing broken bottles up her vagina in a sexual act of his determination.”

Eventually, after her stroke, she lost custody of her son, Roan, for a reason—via a signed N.D.A.—which she was unable to disclose. She dealt with this devastation via Buddhism while still managing serious health issues.

In 2013, Stone won a Nobel Peace Summit Award for her work with HIV/AIDS victims. And a while after she lost residential custody of Roan, she adopted another son, Laird, and then shortly thereafter, another son, Quinn. Lacking a job and money, providence intervened, and she earned a cosmetics contract with Dior.

Often, Stone took jobs, but her honesty and dependability were not always assets. “It would be fair to say I fucked myself.” She gained a reputation for being difficult, but she’s never had an issue in standing up for friends and co-workers and speaking her mind.

Often shocking, Sharon Stone’s life has been difficult from birth, but one senses her immeasurable growth as an intelligent, empathetic, well-traveled feminist. The Beauty of Living Twice is a powerfully written and enlightening read for Sharon Stone fans, cinephiles, and lovers of glitzy, yet down-to-earth memoirs.